This Premier League season might not have a Leicester City fairytale or a runaway leader, but it is one of the strangest in recent years.

For the last few campaigns, it appeared the midtable was becoming a thing of the past. Relegation battles stretched up to midtable, with very few teams in the safe buffer zone between the dogfight and the European spots.

Burnley, somehow, found their way into the Europa League, a season after finishing 16th. Everton, previous stalwarts of the Premier League middle class, flirted with danger. And Leicester City failed to capitalise on their title win of 2016/17 by cementing their place in this footballing petit bourgeoisie.

But this season, it’s all change. There’s a competitive fight in mid-table. Manchester United, freshly manager-less, are in sixth on 26 points but are only two away from tenth.

The league has divided itself into three or four mini-leagues: the top five (with Manchester City and Liverpool arguably in a duel all of their own); the mid-to-upper-midtable scuffle; and then the relegation scrap. And there doesn’t seem to be much scope for movement from one group to another.

We can see how new this is by looking back across the past decade of Premier League football. There have always been fresh air gaps here and there, but rarely to the extent of 2018/19 and never multiple in one season. 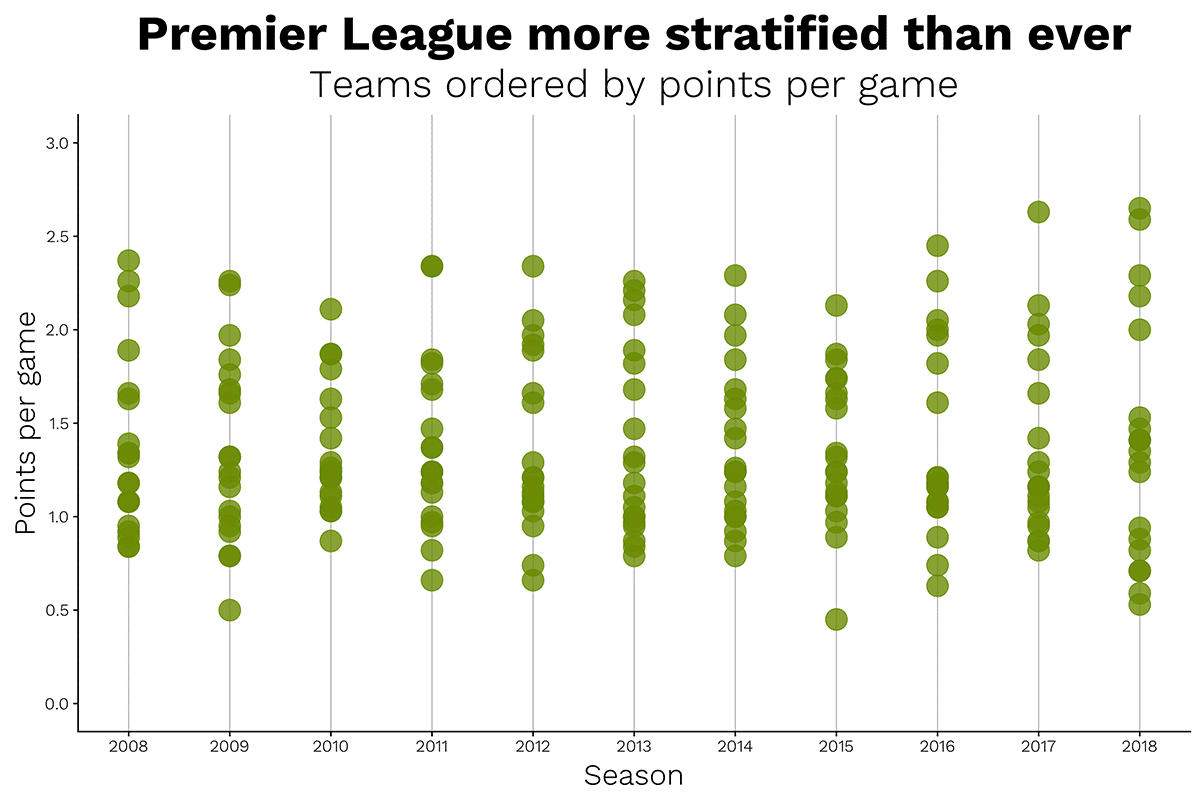 There are other things that this graph highlights, primarily how unfortunate Liverpool and Man City are to be battling against each other.

There have been several seasons in the past decade where the eventual title winner has run away with league. But Jürgen Klopp and Pep Guardiola’s sides would be beating several of these sides comfortably at the current rate.

The other is the effect that this dominance of the top five is having on the rest of the league.

The so-called ‘midtable’ is also clearly getting pulled down by this. Manchester United’s 1.53 points per game would, over a full season, be enough for just eighth in the average year across the Premier League’s past decade.

You could argue that this is a truer reflection of the task at hand at Old Trafford now, rather than the seemingly minimal hop from sixth to fourth that Mourinho was planning for the rest of the season that he’ll now no longer have.

Finally, there’s the very bottom. The current relegation pack starts with Newcastle in 14th, on just 16 points or 0.94 per game. In many seasons, that’s enough to get you relegated.

Fulham on nine points (or 0.53 per game) are almost historical whipping boys. If Claudio Ranieri doesn’t turn things around, they’re on course to join Aston Villa in 2015/16 and Portsmouth in 2009/10 as one of the worst teams in the Premier League era.

This season has the widest points spread of recent times. ‘Class mobility’ seems less fluid than ever. Things may change as we move into the second half of the campaign but two questions remain.

How much? And, will anyone — Manchester United and their money aside — be able to bridge the chasm between those outside the top five/six and those in it?