The pressure in on Crystal Palace as they play host to League Two strugglers Hartlepool in the 4th Round of the FA Cup this weekend. Nobody is expecting much from the visitors who currently sit 16th in the fourth tier of English football but the FA Cup is full of surprises and Hartlepool will be hoping to write their name into the folklore history by defeating their Premier League opponents.

These two sides have only met once before, backing in 2004, when Crystal palace needed extra time to defeat Hartlepool by two goals to one. We're backing Crystal Palace to score at least three goals on Saturday against their League Two guests. Over 2.5 goals have been scored in five of the Eagles' last six outings in all competitions and we're expecting the hoss to play a strong starting eleven and to score at least three times against Hartlepool.

In terms of a final scoreline, we're going for a comfortable 3-0 victory for Crystal Palace. The hosts don't keep many clean sheets but are expected to on Saturday and the last time they did manage to do so they beat Norwich 3-0 at Selhurst Park. Hartlepool have failed to score in three of their last five matches in league and cup, so you can see why we feel their attack will struggle to penetrate the Palace defence.

The odds are against the League Two side

Crystal Palace suffered a 3-1 defeat in their own backyard last time out against Liverpool and their form has been hit and miss in recent weeks. However, Vieira is doing a good job with the London club and Palace currently sit 13th in the Premier League table. A good cup run can spark a return to form for any team and this is what Vieira will be hoping to achieve with the Eagles.

Hartlepool managed to pick up a point via a goalless draw at mid-table side Exeter last time out but will be hoping to find their scoring boots ahead of a trip to Selhurst Park this weekend. Survival is the main priority for Hartlepool this season and as things stand, the team are performing well overall. Saturday cup clash is a free hit for the visitors as nobody expects them to win the game and they will make some decent money off the back of the tie.

Crystal Palace: Tomkins and McArthur are the main injury concerns for the hosts, while Kouyate is on international duty.

Hartlepool: Francis-Angol, Cook, Carver and Olomola could miss the trip to the capital through injury. 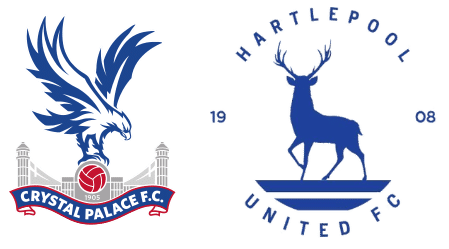