Crystal Palace’s 3-2 win at Arsenal on Sunday was impressive but not entirely surprising. Roy Hodgson’s side – despite a worrying start to the season – have been excellent away from home throughout the campaign.

The Eagles guaranteed their Premier League safety with a victory that typified their campaign: a fearless, confident display of counter-attacking football. It was a world away from their struggles at Selhurst Park.

Only five teams – Liverpool, Manchester City, Tottenham, Manchester United and Chelsea – have picked up more points than Palace’s 26 on the road this term. And only four of those have scored more goals on their travels than Hodgson’s side.

There is a remarkable discrepancy, though, between Palace’s results at home and away – only Huddersfield have collected fewer points at their own stadium. And Palace have looked oddly ineffective, inhibited almost, at Selhurst Park, where they have scored just 14 goals in 17 Premier League matches.

They are one of just two teams in the division – along with Leicester – with a stronger record away from home. Palace have accumulated 62 per cent of their points and scored 67 per cent of their goals on the road. And their away points per game total of 1.44 dwarfs their home average of 0.94.

This is unusual at any level of football, but particularly in the Premier League, a division in which away victories for teams in the bottom half of the table are often rare. The sides directly above and below Palace – West Ham and Newcastle – have won just seven between them. Palace, meanwhile, have eight from 18 games and still have a trip to Cardiff to look forward to.

Palace’s efficacy away from Croydon is what has prevented relegation this season. But it is not coincidental, not just a case of good fortune. It is the result of discipline, of Hodgson’s tactical intelligence, and of Palace’s functionality as a counter-attacking unit.

Arsenal, who had only been beaten once at the Emirates in the league prior to Palace’s visit on Sunday, were the most recent victims of the Eagles’ rapid and incisive movement on the break. And in December, it was Manchester City on the receiving end. Pep Guardiola’s side have won every other match at the Etihad in the Premier League this season, scoring at a rate of 3.1 goals per game. But they could not get the better of Palace.

There have been wins at Wolves, Burnley and Newcastle, too, and Palace very nearly shocked Liverpool at Anfield, falling to a 4-3 defeat. 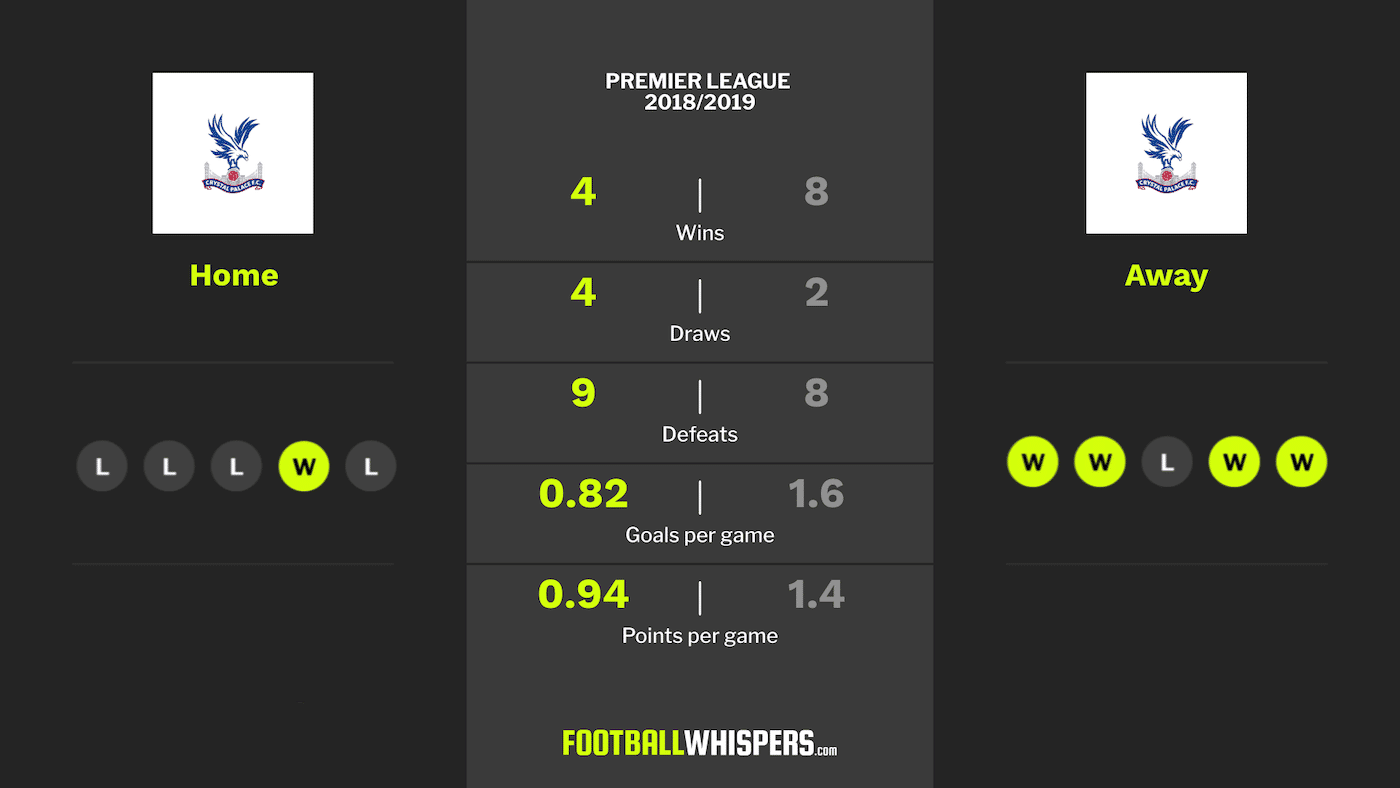 Palace’s ability to move the ball forward quickly, to get players forward in numbers having won the ball back, means they are far more efficient as an offensive unit away from home.

Wilfried Zaha, who now has nine Premier League goals to his name this term, has thrived on the road. He is direct, quick and an expert in making the most of transitions. Andros Townsend and Jordan Ayew provide pace on the break, too, and even Christian Benteke found the net at the weekend.

Palace are more comfortable when they do not have the ball, when they can remain compact and patient before springing into life on the counter. That, inevitably, is much easier to do away from home, when the emphasis is on the hosts to control the ball and dictate play.

It is perhaps an explanation as to why Palace have struggled so badly at Selhurst Park. When they are faced with a team who sit back, who invite them to break them down, more often than not they come unstuck.

That is exactly what happened in early March when Brighton travelled to Selhurst Park. Palace had 63 per cent of the ball – way above their average of 46.4 per cent – and fell to a 1-2 defeat. By contrast, in their wins at Fulham, Huddersfield, City, Wolves and Leicester, Palace had significantly less of the ball. And against Arsenal on Sunday, they managed just 27 per cent of possession.

“You’ve got to make certain you’re compact, that your midfield is narrow and your back four is narrow,” Hodgson told BBC Sport after the win at the Emirates.

“We knew that, if we could keep that control defensively, with the two players we had up front today – they were in such excellent form – we were going to cause them problems on the counter attack when the spaces opened up. And the spaces, of course, did open up.”

The key for Hodgson heading into next season will be to find a solution to Palace’s less than impressive home form. If he does, the Eagles will almost certainly be challenging in the top half, not glancing nervously over their shoulder at relegation.