Crystal Palace boss Alan Pardew is under a lot of pressure. Their 3-0 win over Southampton put an end to their seven match losing streak but Pardew’s men are still just the 3 points above the relegation zone. It’s not what those at the top of the Palace hierarchy had in mind when they signed off on over £50 million being spent in the summer. For quite sometime now Pardew as topped the ‘next manager to be sacked’ bookies table but that emphatic victory over Southampton may have given him some breathing space. It was a win that showcased everything good about Palace and their style and one that could be built on.

Looking past results there is reason for Palace fans to be excited about the season. £30 million man Christian Benteke is doing what he was signed to do in scoring goals and only Chelsea, Arsenal, Liverpool and Manchester City have scored more goals than the Eagles. It’s what they’ve been famed for in the past – being aerially dominant – which has let them down so far this season and it’s not something you would imagine being sustainable in the long-term. Of the 26 goals Palace have conceded this season 11 have been the result of a set piece. You would imagine Palace will eventually resort to the norm of being defensively strong when defending set pieces but perhaps fresh faces are needed for this to happen.

While the Palace defensive style isn’t too taxing in terms of energy exerted, Damien Delaney is 35-years-old now and Scott Dann is 29-years-old. James Tomkins is a centre-back by trade and could replace the former but is playing well in his new right-back role. Martin Kelly can also play at centre-back but again he’s been deployed as a full-back throughout his career. There’s not a lot of depth in that department for Pardew. Palace quickly need to re-establish their aerial authority in both penalty areas and the club may have to dip into the market to stem the tide sooner rather than later. 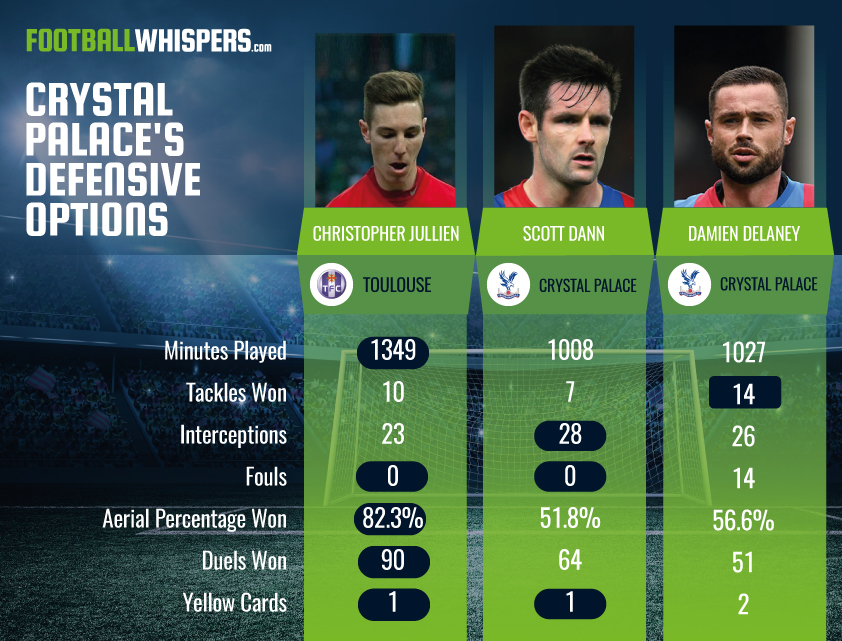 A good fit would be Toulouse’s Christopher Jullien. A quick look on Google will tell you he’s a 23-year-old 6ft5 French centre-back who plays in Ligue 1. Linking a tall centre-back with a move to Palace may seem lazy but it’s not just his aerial ability which makes him a good fit. But to see why he’s a good fit we need to examine the Palace shape and style. 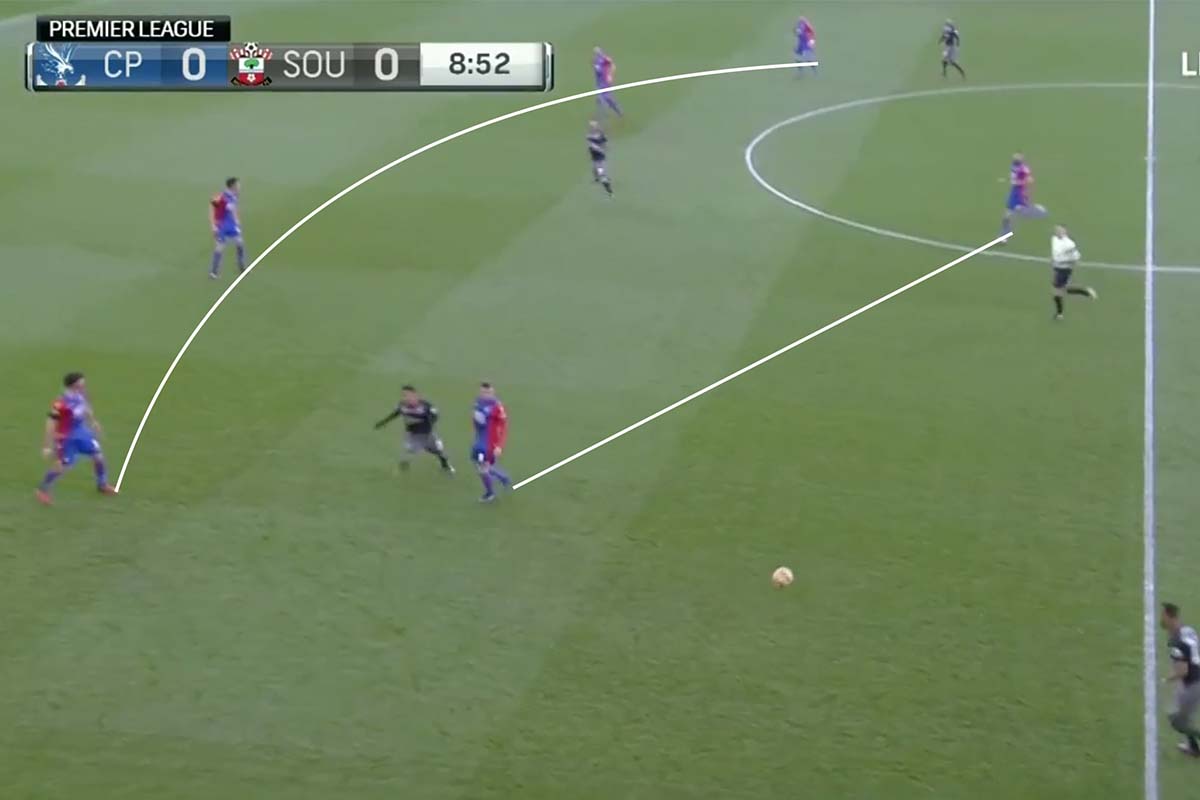 For the most part, Crystal Palace line up in a 4231 formation. The personnel changes from game-to-game but the makeup of the system stays the same. The four in defence are all powerful individuals who tend to be aerially dominant. Against Southampton, the game the picture above is taken from, Palace lined up with James Tomkins, a natural centre-back, at right-back, Scott Dann and Damien Delaney at centre-back and Joel Ward at left-back. All four are over 6ft and all four win 2 or more aerial duels per 90 minutes.

Ahead of the four Palace lined up with James McAthur and Joe Ledley. Neither are the most creative but both are what’d you call grafters. For Palace it was a back six of hard-working, aerially dominant, dogged players who won’t give up chances without putting up a fight. 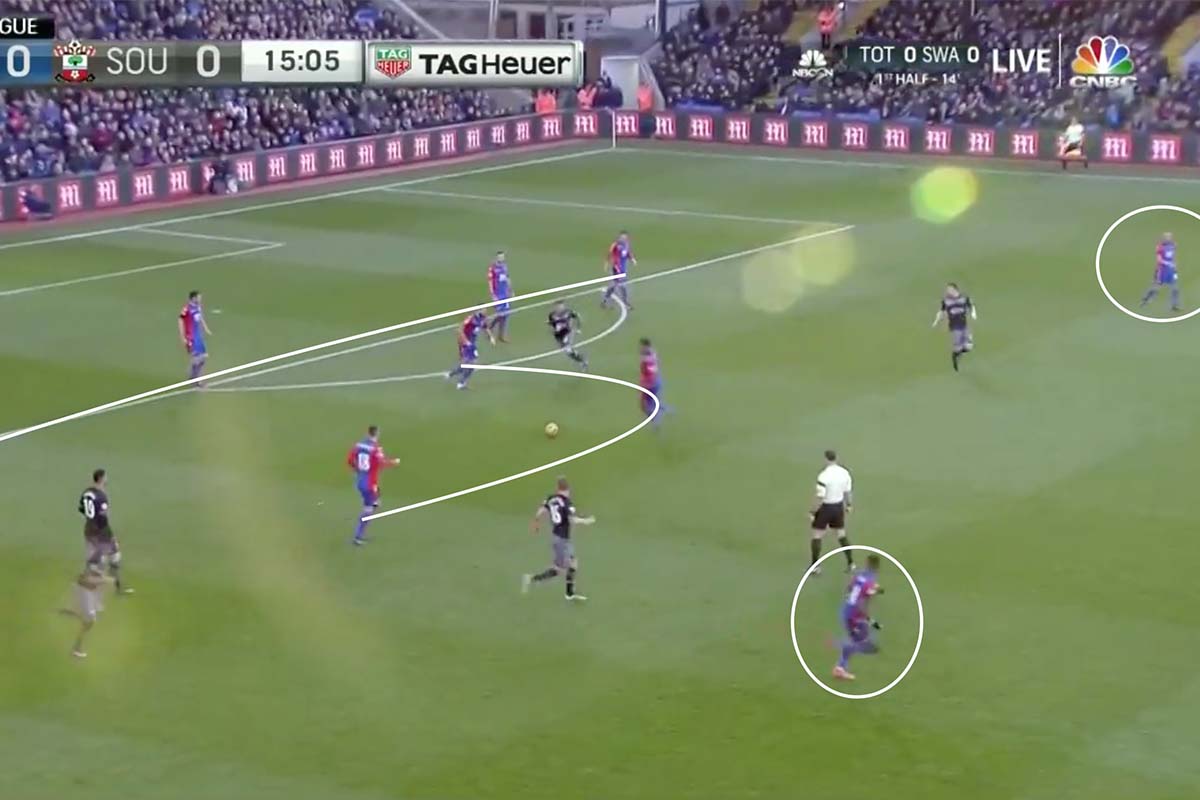 When Palace are defending the two centre-midfielders, McArthur and Ledley, drop deep to shield the defence and Jason Puncheon, the number 10/attacking midfielder drops deep to make it almost a three man midfield. The two wide players, Wilfried Zaha and Andros Townsend also drop deep to aid the Palace defence. What’s useful for Palace here is when the back four is narrow it’s almost like the team have four centre-backs, due to their height and style, and then the wide midfielders appear as wing-backs. It’s almost saying to the opposition ‘if you manage to beat our wide players for pace then the cross that comes in better be good to get the better of our four centre-backs’. 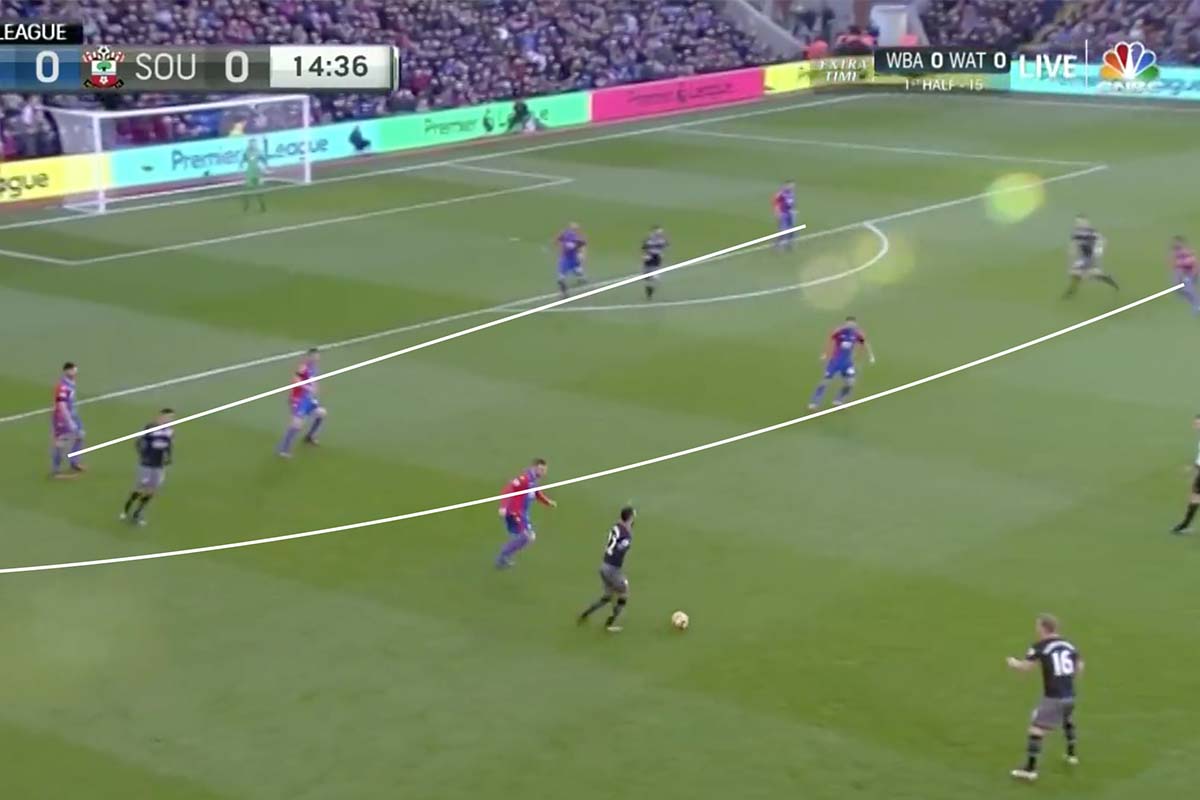 The image above shows two Palace defending with two compact banks of four. They’ve got eight men behind the ball and make it difficult for Southampton to play through. There’s not much space for the away side to play between the lines and it’s all pretty comfortable for Pardew’s well organised defensive set-up. It’s hugely dependent on the wingers doing their job defensively so a lot of praise should go their way for it as well as Pardew for trusting them with such responsibility.

To put it bluntly, Christian Benteke, in the right system, is a monster. He struggled at Liverpool because the team weren’t playing to his strengths and Benteke wasn’t good enough to have a team wanting Champions League football to be built around him if it nullified the likes of Philippe Coutinho and Roberto Firmino. For the Belgian to be an attacking threat he needs the system to be built around him and Pardew has done just that. What makes it so effective though is the fact it brings the best out of the supporting cast. Benteke is now back to his devastating best. 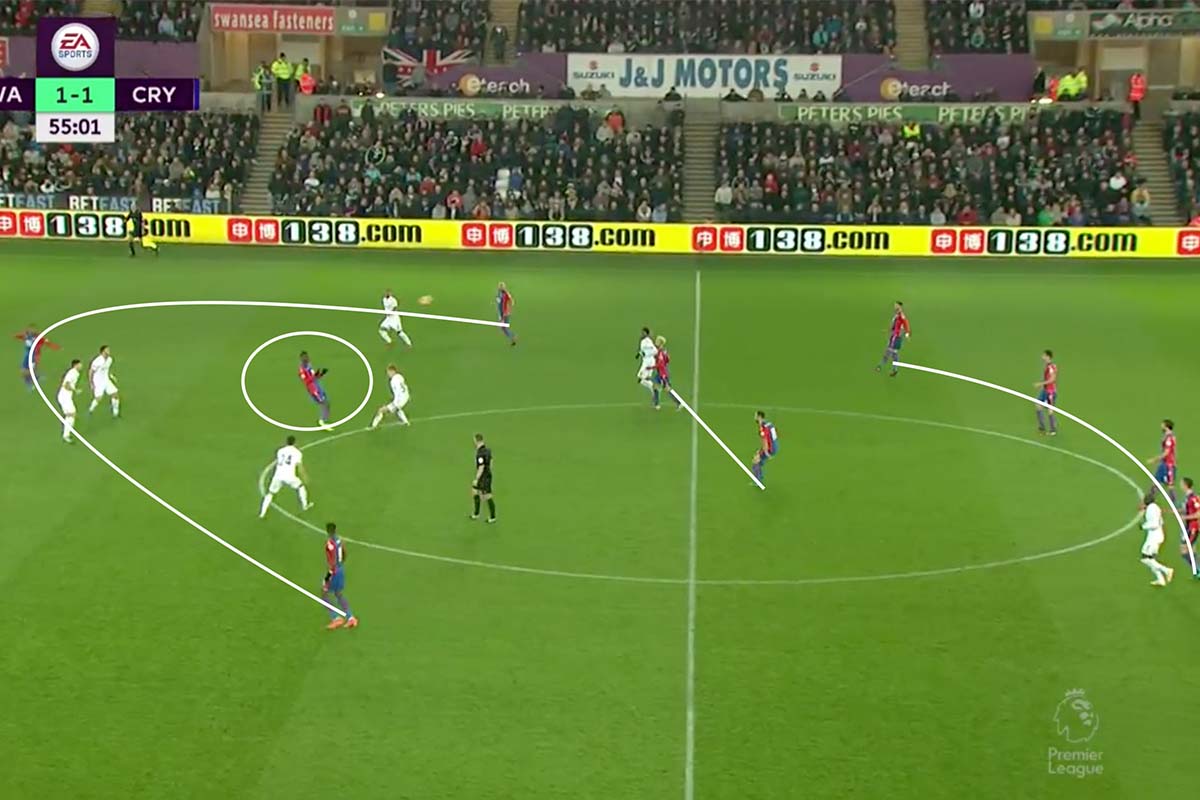 The Belgian is winning 9.8 aerial duels per 90, the highest in Europe, and Pardew looks to make the most of his aerial dominance. In the above picture, taken from the 5-4 defeat to Swansea, you can see how the system is built around Benteke. When Palace have a goal kick the back four push right up in an attempt to be as compact as possible in attempt to get any second or third balls and it stops the play being so stretched and cuts out the potential counter attack. When the goal kick is taken Puncheon and Benteke almost switch positions. Benteke drops deep to win the long ball and Puncheon occupies the centre-backs and the threat of his pace prevents them from pushing right up and looking to squeeze play. Benteke has support from all angles in the above picture and it gives Palace a chance to really build an attack. 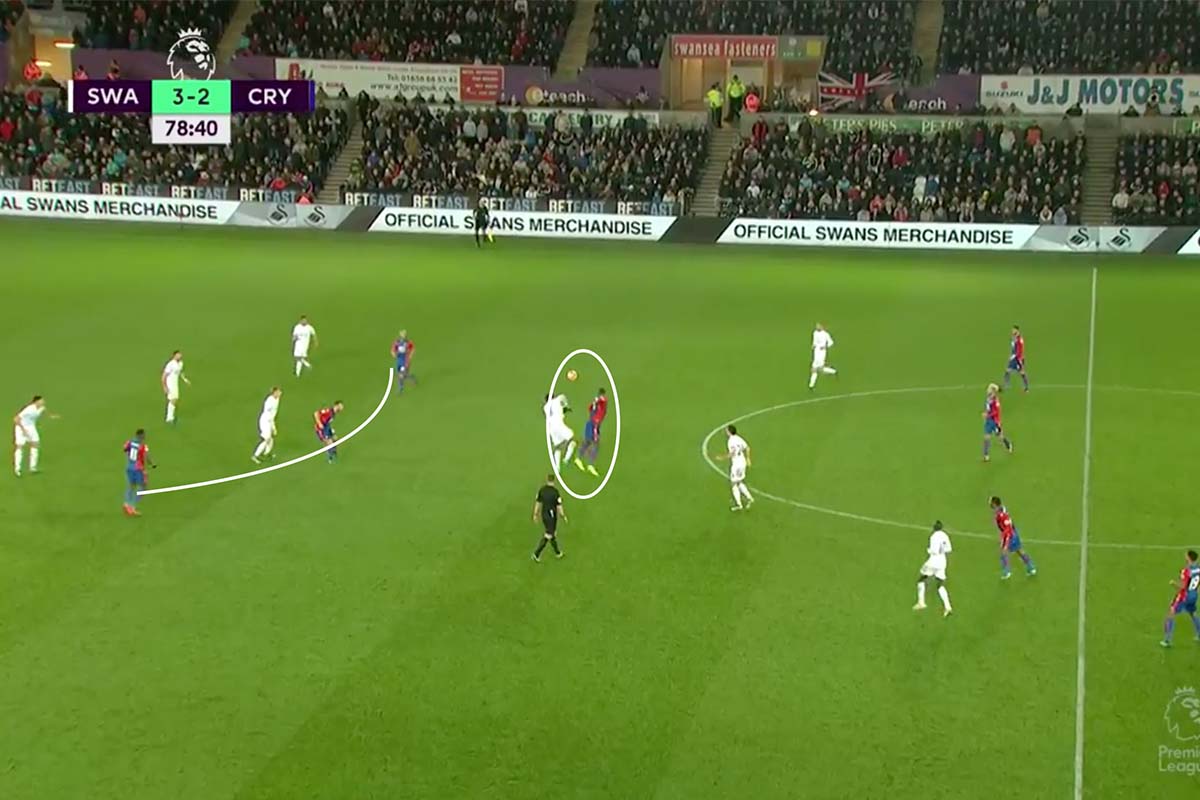 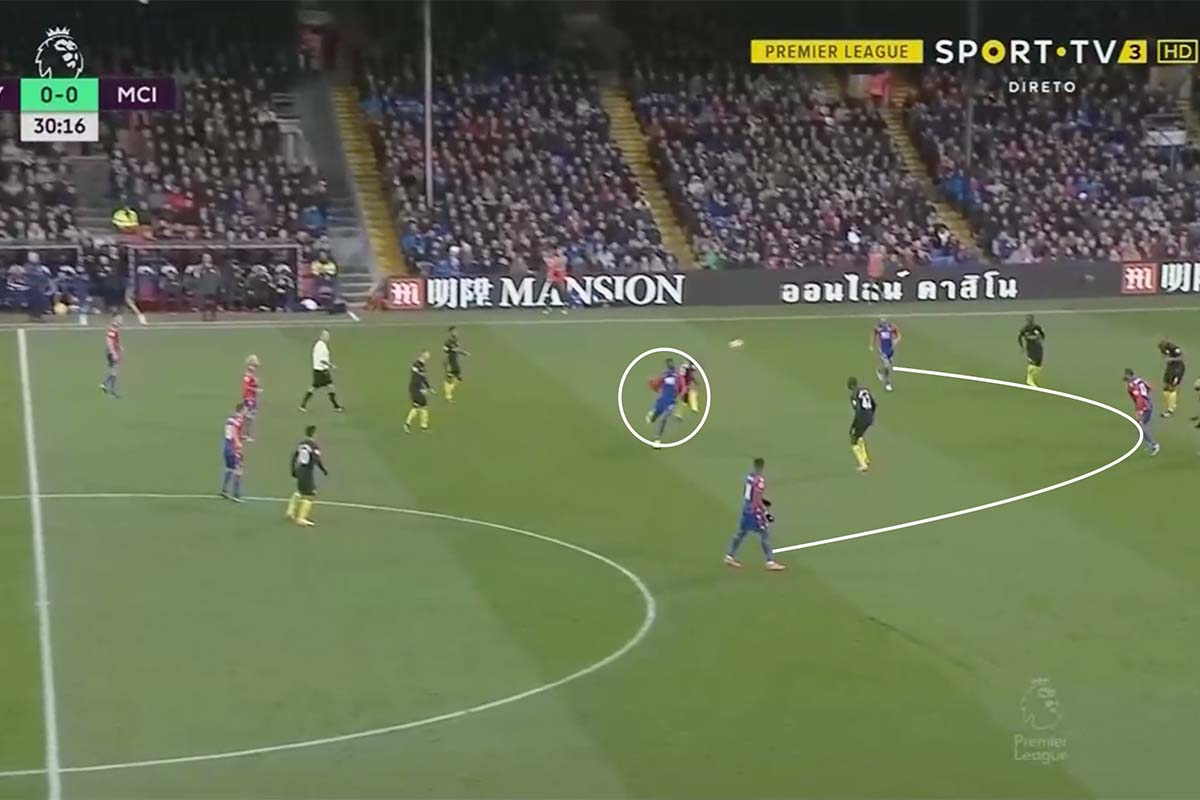 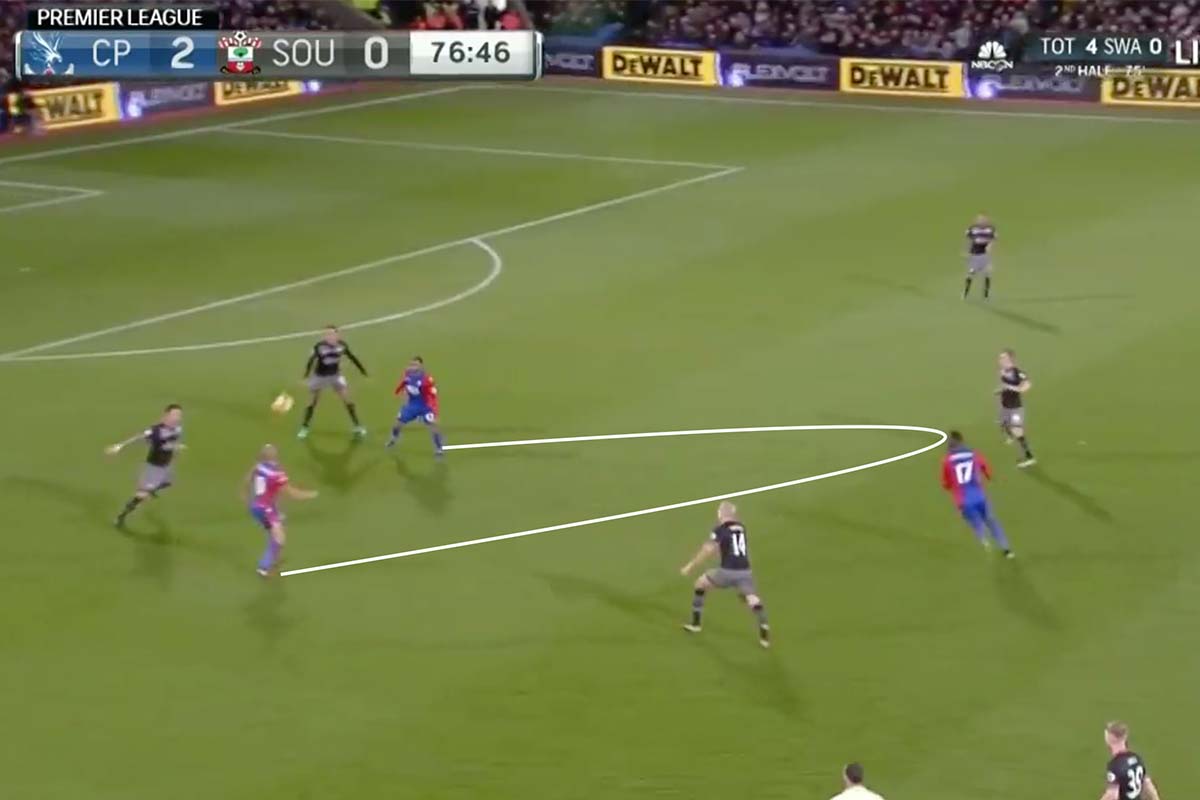 In the above three pictures you start to see a trend. Benteke drops deep to win the header and the supporting cast get beyond him so the fact he’s winning so many aerial duels isn’t in vain. As soon as Benteke wins the ball and it falls to a Palace player his first thought is to get into the penalty area and await the inevitable cross. The big striker positions himself cleverly and it’s partly why he wins so many headers in dangerous area. 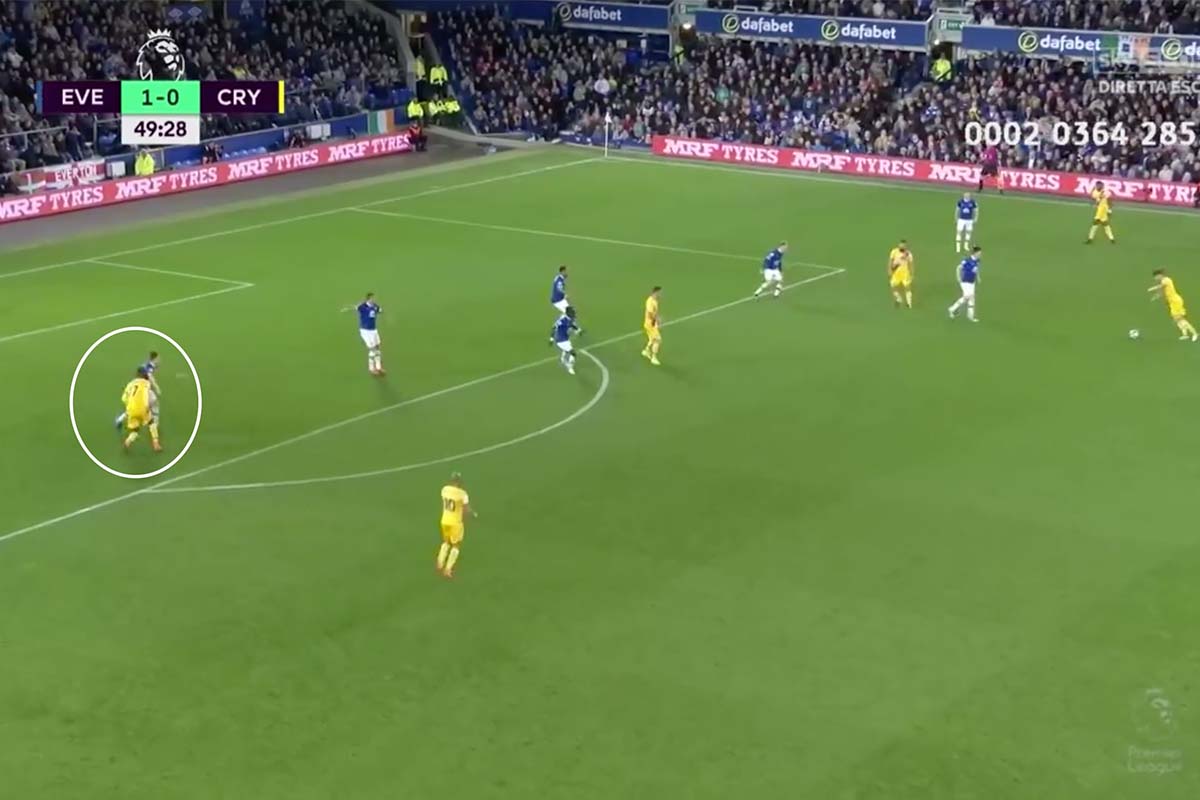 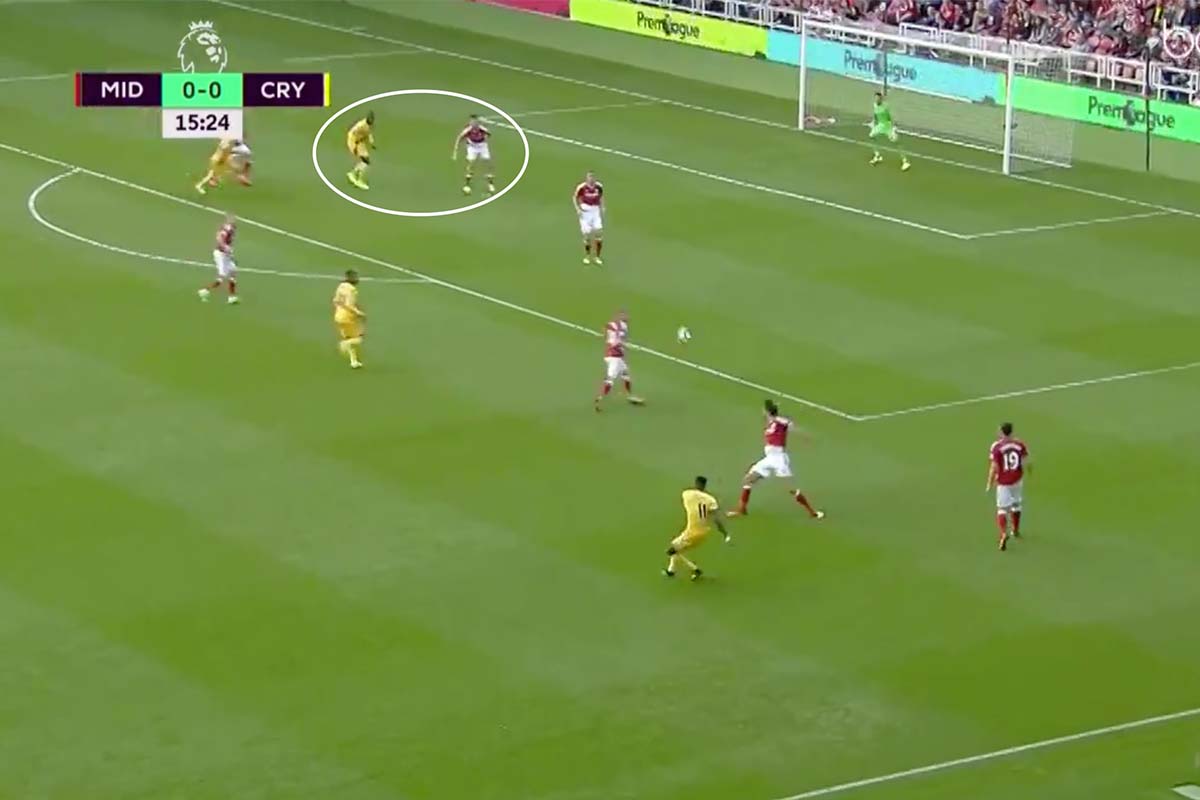 In both the two pictures above, taken from the lead up to goals against Everton and Boro, you can see Benteke has positioned himself towards the middle to back post part of the penalty area and has a spaced himself so he has a running jump on the defender. He’s not just banking on his aerial ability to be enough.

It seems his impact has gone under the radar a little so far this season but if Palace keep playing to Benteke’s strengths they’re going to be fairly comfortable in the Premier League table.

A closer look at Christopher Jullien.

He’s an aerial threat in both penalty areas and wins, on average, 4.8 aerial duels per 90 minutes with Palace’s Scott Dann averaging 4.1. He’s scored two goals already this season which were both thumping headers off of corner kicks. In that sense he’s ideally suited. However, it’s his reading of the game and his ability on the ball which makes him a standout option for Palace. 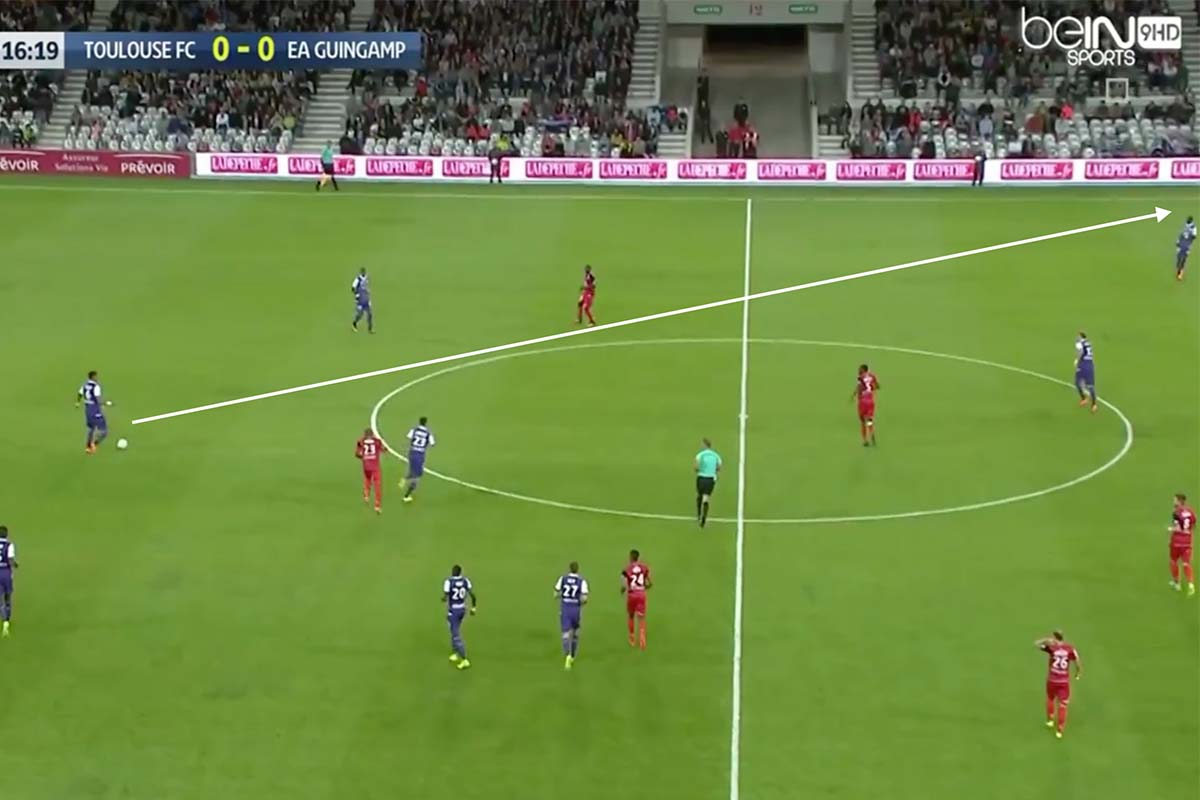 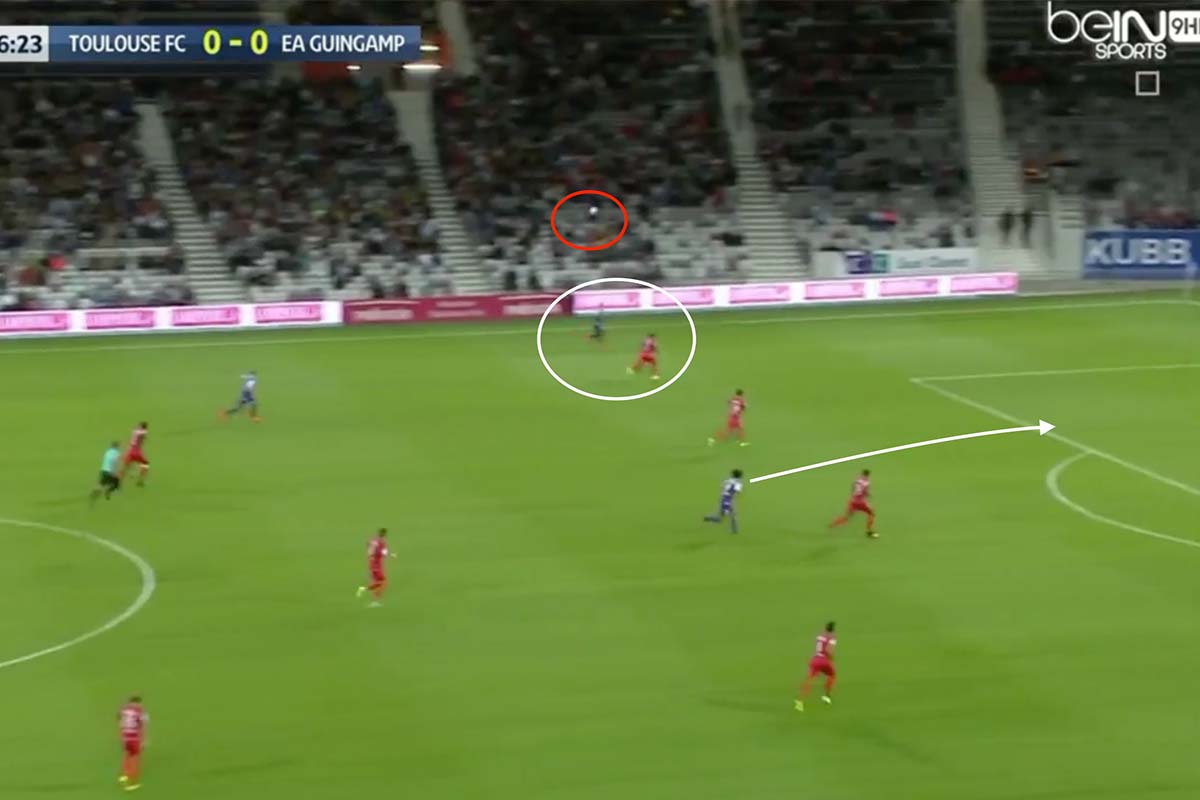 In the above two pictures you see Jullien’s ability on the ball. There are simpler passes on but he hits a raking left footed pass to the left side which immediately gets Toulouse on the attack and isolates the Guingamp right-back up against the Toulouse midfielder. In the centre you can see the striker making his way into the penalty area in an attempt to get on the end of the inevitable cross.

In Townsend and Zaha Palace have talented, tricky and direct players who can beat most full-backs in the league. Zaha averages 4.5 dribbles per match and Townsend averages 2.4. Getting them 1 v 1 against a player should be a tactic of Palace’s and quick passes out wide to them isolates them against the opposition’s full-back’s. Jullien would look to do just that. 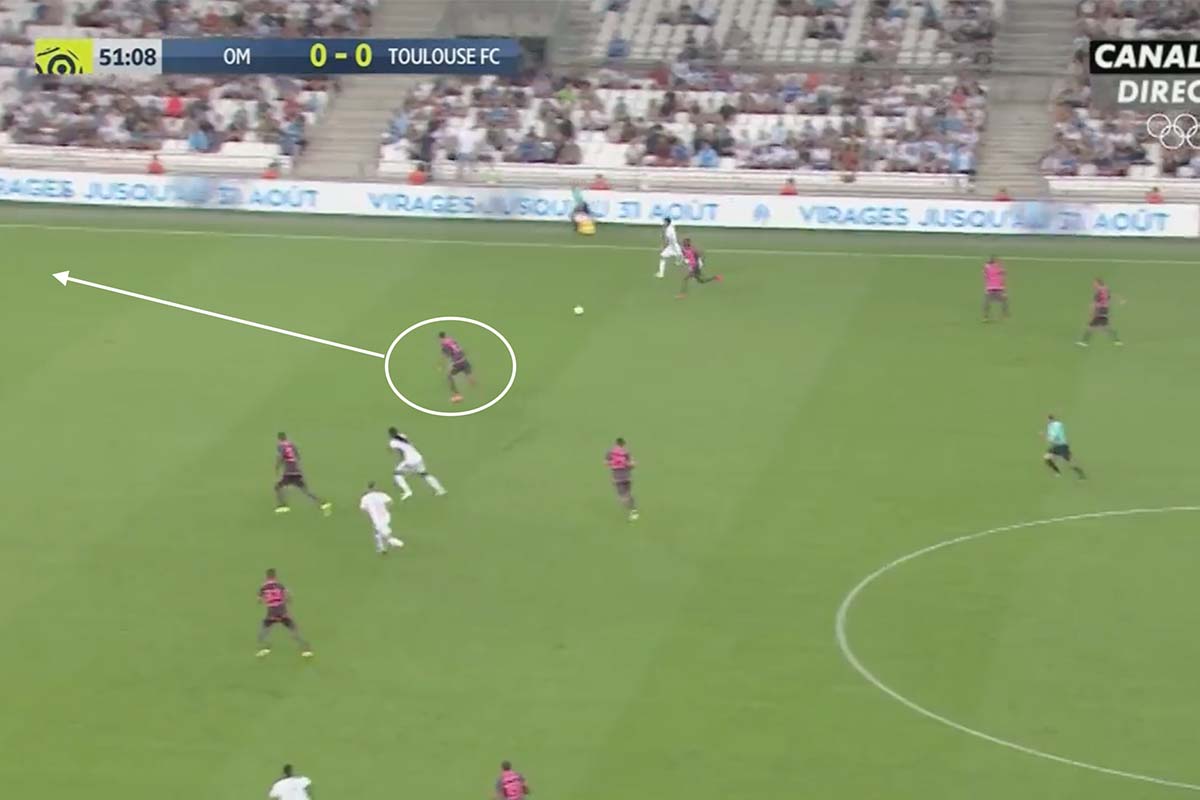 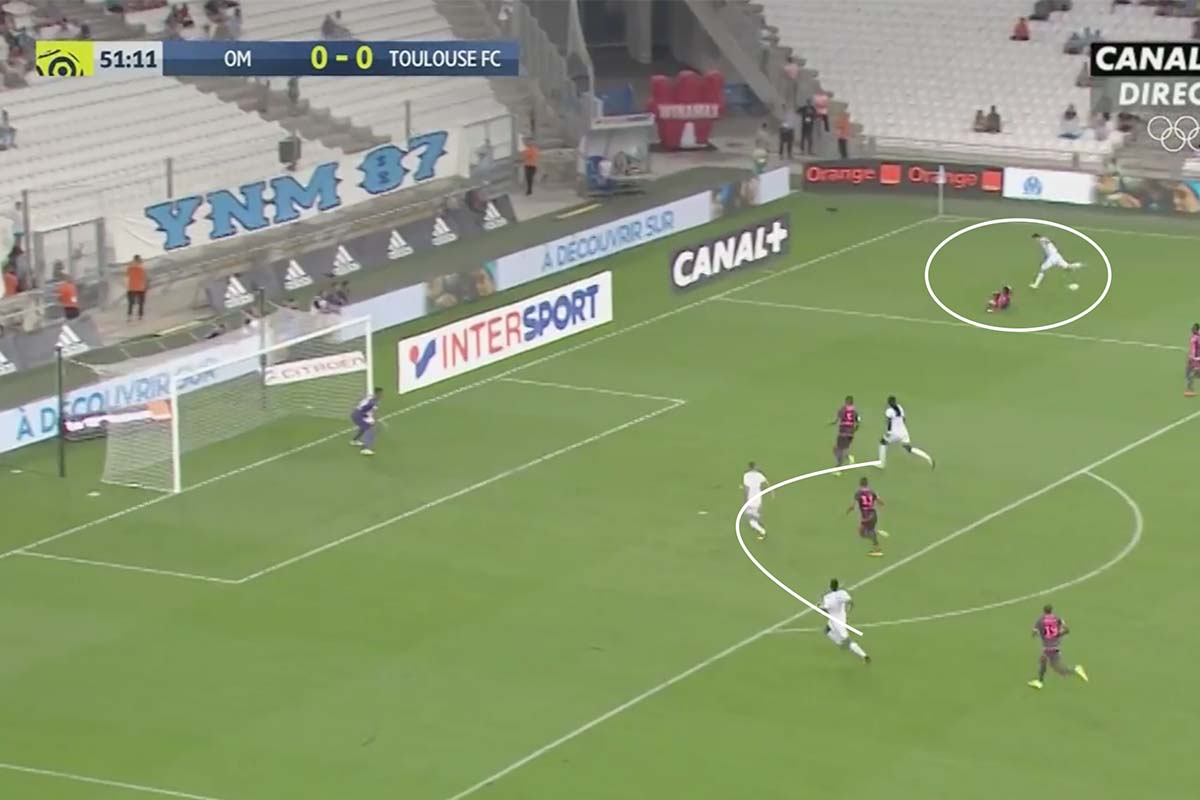 In Palace’s system the full-backs often push up to offer the width. This can sometimes leave them open to the counter attack down the flanks. It’s important for the centre-backs to be able to cover if needed. Jullien showcases his ability to do so in the above two pictures. Marseille are able to break down the right and the man in possession is faster than the Toulouse left-back. It’s 4 v 3 in Marseille’s favour and the man in possession has space down the right unless Jullien get’s over and puts a stop to it. He does just that by preventing the cross from coming in. Had Marseille got that ball in it was 3 v 2 in their favour in the penalty area.

Transfermarkt values the centre-back at £2.3 million, Palace could potentially get him for around the £6 million mark. He could be yet another shrewd signing for Pardew from Ligue 1 in the long-term.

Is Maxime Gonalons the Man to Give Everton Balance?