By the end of last season, Burnley had conceded 39 goals in 38 Premier League games. Their seventh place finish was based largely on a sturdy defence, an inherent resilience and robustness that allowed them to compete against even the strongest opposition.

Sean Dyche’s side kept 12 clean sheets last season. They conceded 12 goals fewer than Arsenal and only one goal more than both Liverpool and Chelsea. They had the best defensive record outside of the top five and conceding more than once in a game was a rarity.

This season, though, things have changed. Burnley have shipped goals at an alarming, and uncharacteristic, rate. Only Fulham, whose defensive woes have been well-documented since their promotion from the Championship last season and ultimately cost Slaviša Jokanović his job, have let in more than the Clarets' 27.

Few expected such a drastic change: from near impenetrable to worryingly porous. Dyche has insisted that little has changed, that his side have been unfortunate to concede so many goals and that they will soon revert to the norm. But the stats do not offer such a positive outlook.

Burnley’s rate of conceding has more than doubled: from 1.02 goals per game last season to 2.07 this season. Their xG conceded per game is even more concerning. It is up at 2.25, by some way the highest in the division, an indication of how many chances they are allowing their opposition.

Burnley have, under Dyche, always been a side that surrender possession and maintain a compact shape. The result is that they face more shots than most. What they had done well, prior to this season, was ensure that the bulk of the shots were not likely to go in. But now they are allowing teams far too many good chances.

Burnley have conceded 2.53 big chances per game, compared with 1.15 last season. If they continue at this rate they will be in serious danger of relegation. They do not score enough goals to compensate for their deficiencies at the other end of the pitch. 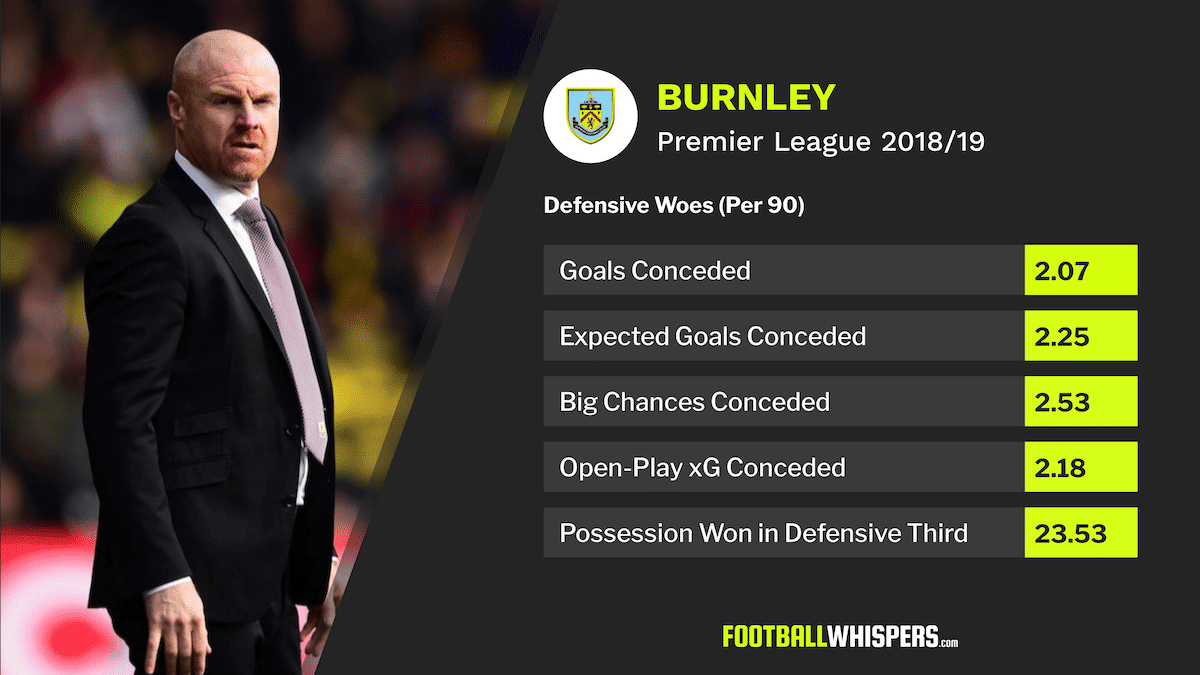 “I think the margins are really tight,” Dyche told the Lancashire Telegraph earlier this month. “They always are with us, so getting back on the right side of them is important. Sometimes it’s literally a matter of yards with shape details, and we’ve just come away from the one per cents.

“It comes through coaching and realignment, but also time, bonding again and finding their way and letting it come back to a norm.”

Dyche and his players will no doubt be working hard to address the defensive issues that have plagued them so far this season. But a solution will need to be found soon if they are to avoid slipping further down the table.

Joe wasn’t the Hart of Burnley’s problems; Heaton has been fortunate

Hart is showing he’s no average Joe at Burnley

Why Vydra must finally prove top flight worth

Assessing where Burnley must strengthen to shock Europe

Pick and share your Burnley side to beat Chelsea

Why Is Ben Mee Being Ignored By England?

Who Will Dyche Pick To Beat Palace?

Pick and Share your Burnley XI to Face Leicester

Dyche Is Everything Everton Need In A Manager

Pick And Share Your Burnley XI To Beat Southampton

Who Should Sean Dyche Start Against West Ham?