These days, a Catholic player signing for Rangers wouldn’t even raise an eyebrow, despite the notoriously volatile sectarianism that still exists in parts of Glasgow. But it was a completely different story on July 10th 1989 when a certain Maurice John Giblin Johnston put pen to paper at Ibrox Park.

This was the daddy of all football stories, the monumental transfer to end them all, the JFK moment for fans of not just Rangers and Celtic, but all other clubs around the globe.

Back in the summer of 1989 the footballing landscape was very different from that of today. Arsenal were league champions for the first time in 18 years, English clubs were still banned from entering European competitions and the world was still in shock following the tragedy that took place before the FA Cup semi-final between Liverpool and Nottingham Forest at Hillsborough.

Meanwhile, in Scotland, Rangers still maintained an unspoken policy of not signing prominent Catholic players, but that was all about to change after one of the world’s most controversial football transfers and a deal that would rock football to its core.

Born in Glasgow, Celtic fan Mo Johnston attracted the attention of scouts as a teenager with some impressive performances for the Glasgow Catholic Schools select side and was eventually invited for a trial by Partick Thistle where he again impressed and subsequently signed a full-time professional contract.

He spent two full seasons at Firhill where he quickly became one of the most promising young talents in the Scottish game and his performances and goal scoring feats would soon mean that Thistle would struggle to retain his services.

Sure enough scoring 41 times in 85 games for Thistle was enough to tempt Watford’s future England manager Graham Taylor to pay £200,000 to take the player south of the border in 1983.

Johnston’s time at Vicarage Road was something of an immediate success and it was while with the Hornets the youngster picked up his first Scotland cap, getting his international career off to the best possible start by scoring in a 2-1 Hampden victory over Wales.

Despite this he was still very much a “Hoop” through-and-through.

On the same day of his FA Cup final appearance for Watford against Everton in 1984 – which saw “Mo Jo” have a goal disallowed in a 2-0 defeat – Celtic suffered an extra time defeat to Aberdeen in the Scottish Cup. Johnston later said that when he found out about that Hampden defeat in the Wembley dressing room it hurt every bit as much as his and Watford’s loss.

In an interview with a Glasgow radio station just prior to that FA Cup final he even declared to listeners he would “walk over broken glass,” to play for Celtic and scoring 23 goals in just 38 games in England’s top division did nothing to harm the move back north that he so wanted.

So it was to the delight of the Celtic support that his dream finally became a reality when the Bhoys coughed up a then Scottish record £400,000 in October 1984 to bring the striker home to Glasgow as a replacement for Charlie Nicholas who had moved to Arsenal the year before.

Johnston’s first season at Parkhead ended on a high note as he helped his team-mates to a memorable 2-1 Scottish Cup final victory over Dundee United and the following season he was involved in one of the greatest title run-ins ever witnessed as Celtic snatched the championship on the last day of the season from long-term leaders Hearts.

He would go on to enjoy three more seasons at Celtic, forging a formidable strike partnership with Brian McClair; but goals alone were not enough to prevent a rejuvenated Rangers side becoming the dominant force in Scotland as new owner David Murray gave the go-ahead for an era of big spending at Ibrox.

This was music to the ears of newly appointed player-manager Graeme Souness who was embarking on a significant buying spree which brought established English internationals such as Terry Butcher, Graham Roberts and Chris Woods to Glasgow as the power very much shifted to the blue half of the city.

So after a series of off-field misdemeanours, on pitch disciplinary issues and the fact that his contract was about to expire, Johnston eventually departed Parkhead in the summer of 1987 for French side Nantes, citing press intrusion and sectarian abuse from Rangers fans as the prime reasons why he had to get away from Glasgow.

His departure may have been met with disappointment from the fans but there was little animosity as many just saw his leaving as further evidence that the Parkhead board lacked the ambition to pick up the gauntlet thrown down by Rangers.

However, despite being a success on the pitch Johnston failed to settle in France and even made it known to ex-Celtic team-mate Roy Aitken that he would welcome a return to Parkhead while on international duty.

This information was quickly passed on to Celtic manager Billy McNeill and it appeared it was only a matter of time that Johnston would be back at Celtic as the two entered discussions in the spring of 1989.

Although Johnston had not signed a contract with Celtic a letter of intent sent to the Glasgow club was seen as all the confirmation that they needed and such was the confidence officials even flew to France to pay a £400,000 deposit to Nantes.

And on the 12th of May 1989, Mo Johnston was unveiled to the media in green and white once again, Celtic having agreed another record fee of £1.2m with Nantes. “There is no other British club I could play for apart from Celtic,” Johnston told the press.

He would even travel to St Mirren with the team for their final league game of the season with the Celtic away support singing his name as they celebrated what they thought was the return of their hero.

The following week a Joe Miller strike gave Celtic the cup and denied Rangers the treble and as Celtic fans made their way home, a newfound optimism began to ooze through the club and their favourite son returning to the club was the icing on the cake.

But on the Monday after that final victory Johnston failed to turn up to a team meeting and the alarm bells began to ring at Celtic Park as the player was nowhere to be found.

Reports at the time suggested Celtic had failed to meet tax payments on the deal with their board of directors being portrayed as bunglers and penny-pinchers. But in truth they had taken their eye off the ball, justifiably feeling that a written agreement, the word of the player and a cash deposit were enough to see them acquire Johnston’s registration.

However, it wasn’t just naivety on the part of Celtic, Mo Johnston’s agent and Rangers fanatic Bill McMurdo was actually one of the key instigators in the move eventually hitting the buffers.

“I was banned from Celtic Park at the time,” he explained. “Celtic had not been in the picture until Johnston told me he was going to see manager Billy McNeill. But I gave him a letter informing Celtic he wasn't in a position to sign.

“That’s because Nantes did not own his contract when Celtic wanted to sign him, it was owned by a company I represented. So the move could only have happened if someone at Celtic had spoken to me in depth, but they didn't want to do that. 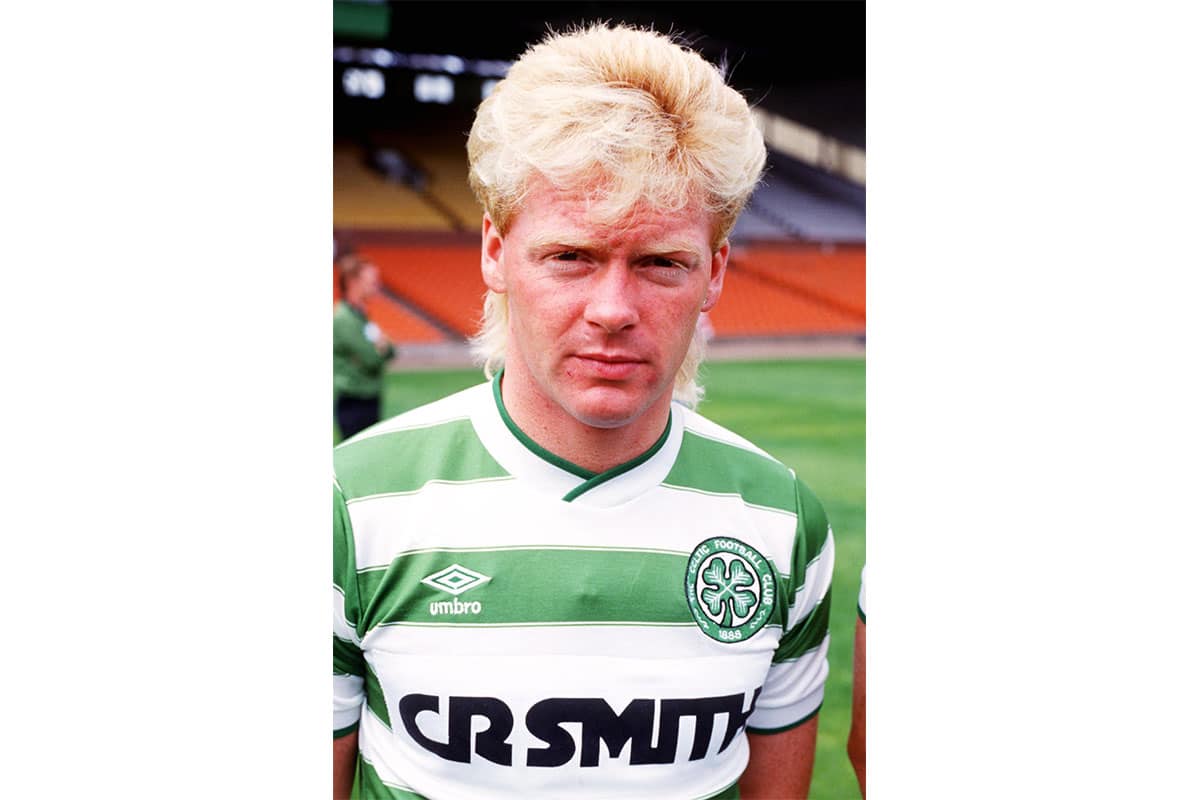 All the time Celtic had been parading their favourite son and what they thought was their new signing, his agent, who held all the cards, was actually in negotiations with Rangers, informing them that the deal was far from done and that his player would join them, “in a heartbeat.”

So at McMurdo’s recommendation Johnston agreed to meet Souness at the Rangers manager’s home and unable to resist his persuasive nature and vision for the future Johnston agreed, in principle, to move to Ibrox.

Meanwhile Celtic continued to drag their heels and, despite having Johnston’s signature on a legally binding agreement, they failed to pay the transfer fee in full and after further indecision from both parties the board eventually announced that they were withdrawing from the deal, thus leaving the door open for the transfer coups of the century.

The only stumbling block for Rangers now was the reaction from their own fans at signing such a high-profile Catholic player, with even the general secretary of the Rangers Supporters Association at the time David Miller telling the Glasgow Herald: “It's a sad day for Rangers. I don't want to see a Roman Catholic at Ibrox.”

But it was a gamble that Chairman David Murray felt would be worthwhile if Rangers were to become a force not only in Scotland, but Europe too.

So when the press pack assembled in the Ibrox Blue Room several days later there was an audible gasp from those who still refused to believe the rumours when the club's management and directors walked in with Johnston by their side.

Instead of returning to the club he loved like he promised he would, astonishingly, Johnston would instead be playing for their bitterest of rivals south of the Clyde – Glasgow Rangers.

“Hurting Celtic was not the drive behind the deal,” insisted Souness. “But yes, I knew it would be a consequence. I felt the manner of the move would damage them for a number of years.”

Meanwhile, Chairman Murray was keen to play down the political ramifications of the deal: “First and foremost it was a football decision,” he explained. “We signed the player because he was the best Scottish player around and that is what mattered. Of course, it removed a cloud that hung above Rangers.”

Needless to say feelings ran deep on both sides of the footballing and religious divide and while Rangers fans threatened to boycott their own club and burned scarves outside Ibrox for the signing of a Catholic, the love affair between the player and his boyhood club was not surprisingly about to end forever.

“I can't forgive him and I don't think the Celtic fans ever will,” said Celtic Manager Billy McNeil at the time. “He disrespected us all.”

As well as the huge newspaper headlines this story created the deal also generated many great tales and urban myths across Scotland, from a Larkhall pub which kept its own Premier League table which did not count any Mo Johnston goals, to a death threat issued to a dog purely because it was called Mo.

But many Rangers fans decided they were willing give Johnston a chance as the two parties formed something of a working relationship. Only one season ticket was returned to the club that summer with average gates remaining steady during the following season.

Johnston repaid their faith; scoring 31 goals in 76 league starts – including three against his former club in total – which helped to deliver two titles in the process as Rangers went on to dominate Scottish football for the next decade.

But after spending just two and a half years at Ibrox he went on to play for Everton, Hearts and Falkirk before making a successful coaching career and a comfortable life for himself in North America. However, it will be that transfer that he will always be remembered for – for better or for worse.

Today Mo Johnston still refuses to talk about THAT move and has no plans to return to Scotland anytime soon, unwilling perhaps to subject his family to the potential ramifications of the most controversial transfer Scotland, if not Britain has ever witnessed.

That’s because more than a quarter of a century later, there are still open wounds on both sides of the divide.