This World Cup has been wild. The big nations are losing, the smaller nations are winning and in amongst it all Russia keep on, well, running. Everyone seems to be getting their moment in the limelight.

Yet, when the topic of dark horses winning the competition comes up it’s usually focused around two nations: Belgium and Uruguay. Each nation has a number of superb, world-class players, yet that same token of optimism hasn’t yet reached the feet of Croatia. Who, in many ways, could be the real dark horses of this competition.

After two games Croatia won six points, scored five goals and conceded zero. Just six other nations had amassed as many points and of those six only three had scored more goals. And only Uruguay managed to keep two clean sheets like Zlatko Dalić’s side.

Indeed, as we’ve seen in the 2-0 win over Nigeria and the 3-0 win over Argentina, Croatia have a strong, defensive foundation built upon unassuming defensive cohesion.

Household names, and not

With that solid base, the Croatian manager has managed to allow his side flourish in midfield and attack. And with players like Luka Modrić, Ivan Rakitić, Ivan Perisić, Andrej Kramarić and Mario Mandzukić up front it’s easy to see why this team haven’t struggled to control games and then score goals for fun.

But Croatia are so much more than just a well-oiled machine. In Mandzukić they have won of the most tenacious strikers in European football, in Rakitić they have a supreme playmaker and goalscorer, while few forwards have been able to skip or glide past defenders as easily as Perisić and Ante Rebić have shown so far on either wing.

And in Modrić they have a central midfielder that could rival any throughout the sport over the past five or ten years. 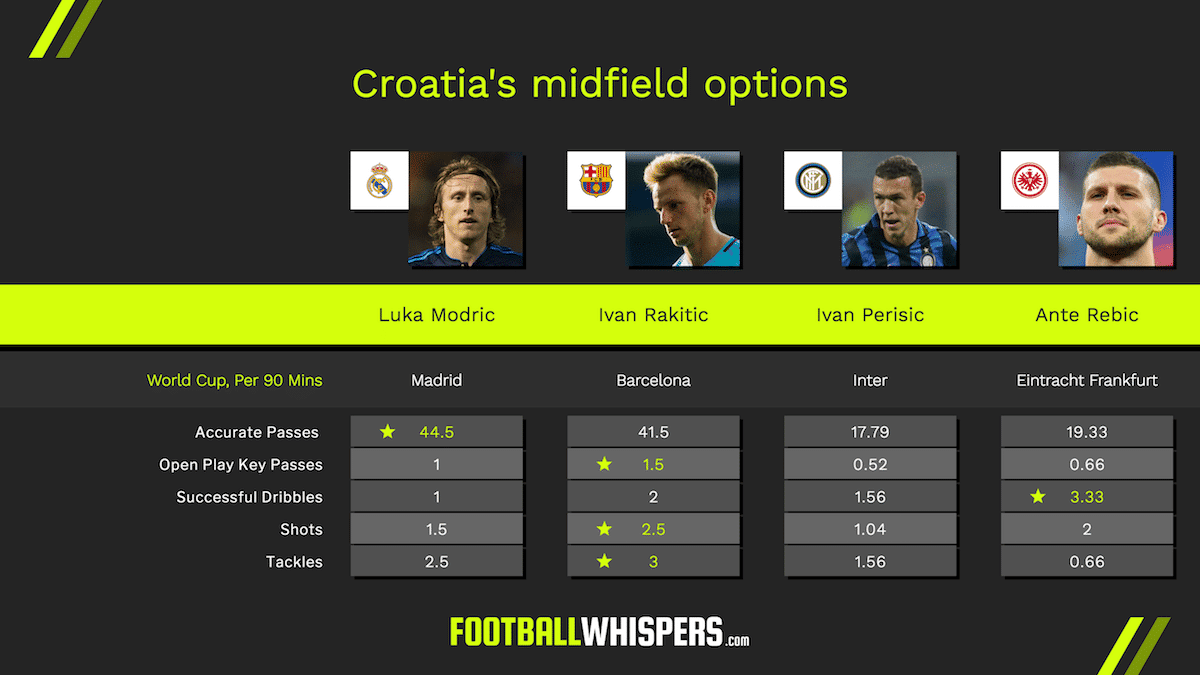 Not a one-man team

While Portugal may rely on Cristiano Ronaldo, England on Harry Kane and Argentina (not very effectively) on Lionel Messi, Croatia have a whole plethora of players that seem perfectly capable of dragging their team to victory if necessary. And that makes them so hard to beat.

Indeed, Croatia’s success thus far has contrasted so strongly with the diminishing form of the perceived favourites for this competition. Dalić’s tactics and system look far more coherent than the one Jogi Löw has tried to implement at Germany or Tite at Brazil.

And, as previously mentioned, the likes of Modric and Perisic have far outshone the likes of Paul Pogba or Andrés Iniesta. Not only do Croatia look more focused and coherent as a team against most of the favourites, but individually they also look in far better form.

The European minnows may also face a favourable rub of the green with their proposed run to the final. Should Denmark finish second behind France in Group C then they will offer Croatia a tough but ultimately beatable opposition in the Round of 16. After that, Dalić’s side will most likely face a Spanish side that have just despatched of Uruguay.

Fernando Hierro’s side are probably the most formidable side in the competition so far, but if Croatia can beat them they would then most likely face Belgium, after Robert Martínez’s side had overcome Japan and Switzerland.

There’s nothing easy about facing Denmark, Spain and Belgium but these are teams that Croatia know well enough and are also sides that they could quite possibly beat. And as such, Dalić’s team have a potential path to the finale that is far easier than what some other teams may find themselves up against.

The odds will of course be stacked against them. But as we’ve already seen in this competition, this Croatian side is packed full of match-winning individuals within a system that gets the best out of every player.

Twenty years ago the nation was knocked out of the semi finals to hosts and eventual winners, France. Maybe this summer they can go one step further and reach the final.