Mesut Özil – Germany’s, and the World Cup’s, biggest contributor of expected goals assisted per 90 minutes in Russia – has retired from international football.

The retirement was nothing to do with football, coming after abuse and blame that the German player has received, but then nor was the criticism of Özil about football.

The midfielder played just two matches, yet created the fifth-most expected goals assisted (total) out of any player at the World Cup. He may not have made a tackle, but it was he who was tracking back, noticing the run of Hirving Lozano, and tried his best to match the young Mexican’s speed.

By all logic, there’s is no reason to fault Özil’s effort in Russia. The photo taken with Turkish president Recep Tayyip Erdoğan before the tournament “as stupid as it was, also gave his critics the perfect weapon to reinforce their denial of him,” wrote Zito Madu on the subject.

“It is with a heavy heart,” Özil’s statement read, “and after much consideration that because of recent events, I will no longer be playing for Germany at international level whilst I have this feeling of racism and disrespect.”

On two levels, this kind of thing is nothing new. The most quoted passage of Romelu Lukaku’s essay on the Player’s Tribune might be this one:
“When things were going well, I was reading newspapers articles and they were calling me Romelu Lukaku, the Belgian striker.

“When things weren’t going well, they were calling me Romelu Lukaku, the Belgian striker of Congolese descent.”

The other thing that isn’t new is a misunderstanding of the hard work that Özil puts in. Sure, the German didn’t make a tackle in 180 minutes in Russia. But Andrés Iniesta made one in 284 minutes; Harry Kane also only mustered a single in 573 minutes of action. It’s almost as if measuring an attacking player’s work-rate by the number of defensive actions they do is nonsense.

The ‘Özil doesn’t work hard’ claims carry over into the Premier League too. In 2017/18, only Eden Hazard made more open play key passes per 90 minutes than the German. The Belgian made just 0.22 tackles per 90 minutes; Özil made almost four times more, 0.83. 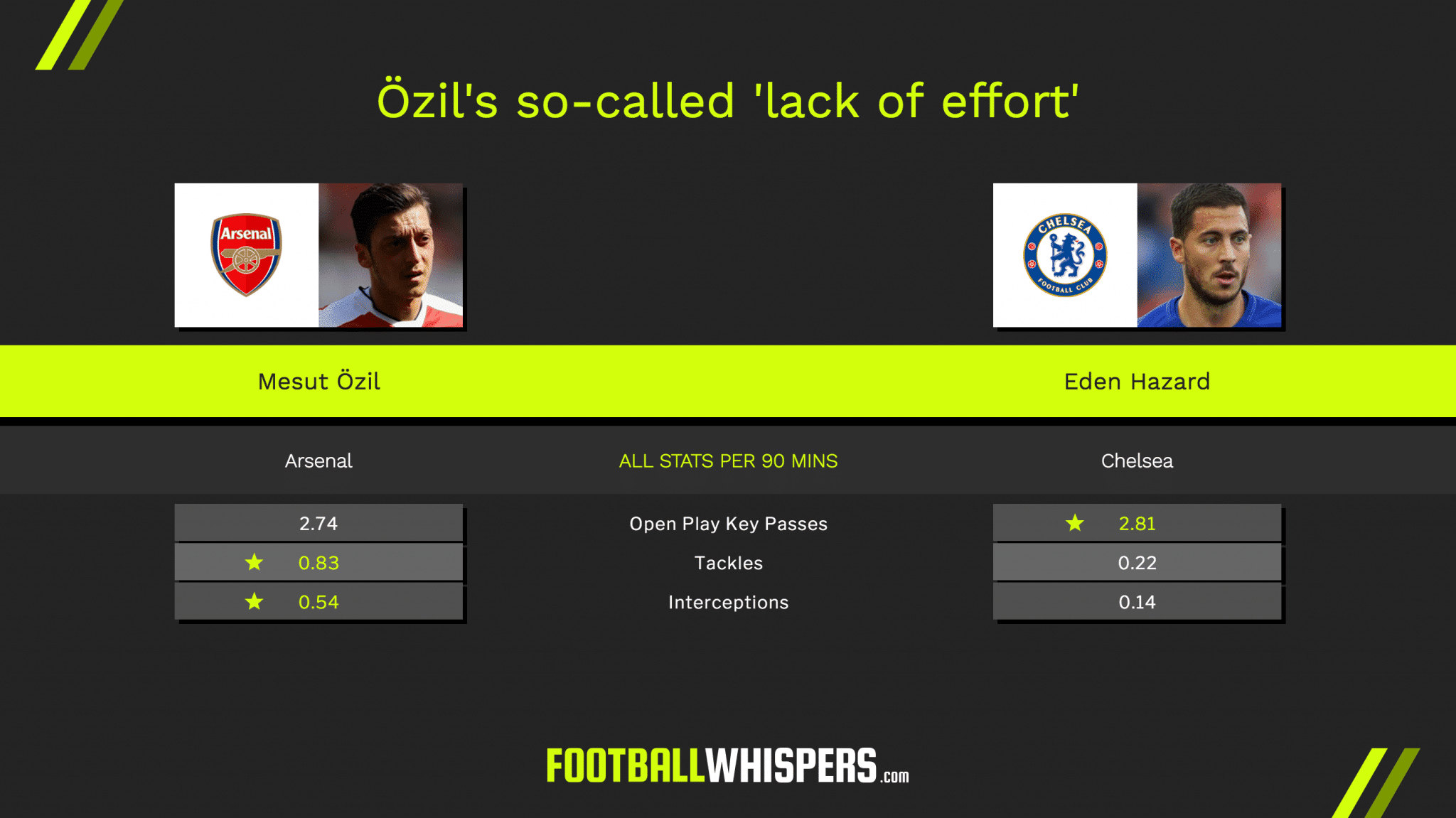 Sure, 0.83 tackles per 90 isn’t much, even for a striker – in fact, it was in the bottom third of attackers in the league. But his creative contribution was in the top one percent in the league.

Maybe, at some point, there will be attackers who will be elite both in terms of defending and creating. Kevin De Bruyne came close this year, but on some level we all recognise that De Bruyne’s season, his mix of open play brilliance and defensive solidity, was freakish. It would be a surprise if he could replicate it again.

For the record, the Manchester City man was in the top 15 per cent of attackers in the league for both open play key passes and tackles, but not quite in the top ten per cent for either.

A different kind of work-rate

Tackles aren’t the only measure of defensive activity – Özil also made 0.54 interceptions per 90 last season, putting him just outside the top half of attackers (De Bruyne made 0.84 per 90).

Interceptions don’t tend to be the go-to measure when searching for a proxy for defensive work-rate though. Probably, this is because tackling is more synonymous with hard-working defensive play – you could count the number of interception highlight reels on your fingers; you’d drown in the number of tough-tackling ones.

In cases like Özil’s, there is probably also a manipulation of the narrative in it, at least semi-deliberately – to look for a stat that backs up assumptions of a physically lacking, commitment-lacking player.

But the commitment Özil puts in is in attack, in creating for others. Teams need defensive solidity, but they also need an attacking spark. Take Özil out for someone who defends more but creates less, and you’ll soon see the dullness that team would have when going forward.

Özil is a great player, and his principal crime, when he receives this criticism, is being on a losing team; this time, while being part-Turkish.