As La Liga headed into its 2017/18 winter break in December, with his 33rd birthday just around the corner, it appeared as though time was finally beginning to catch up with Cristiano Ronaldo.

The Real Madrid forward had just four league goals to his name for the campaign, and a humbling 3-0 defeat to bitter rivals and unbeaten table-toppers Barcelona at the Bernabéu on December 23 meant the Portuguese's prospects for the new year looked glum.

However, 19th-century scientist Sir John Lubbock once wrote “Rest is not idleness . . .”, and Ronaldo has used the winter shutdown to recharge his batteries and restore his form in the most timely manner. And not for the first time.

Last season, after European Championship triumph with Portugal robbed him of a full summer's recuperation, the former Manchester United attacker looked at little jaded in the campaign's early stages. Yet he found the energy and quality to score the goals that powered Los Blancos to a La Liga and Champions League double at the ‘business end' of 2016/17. 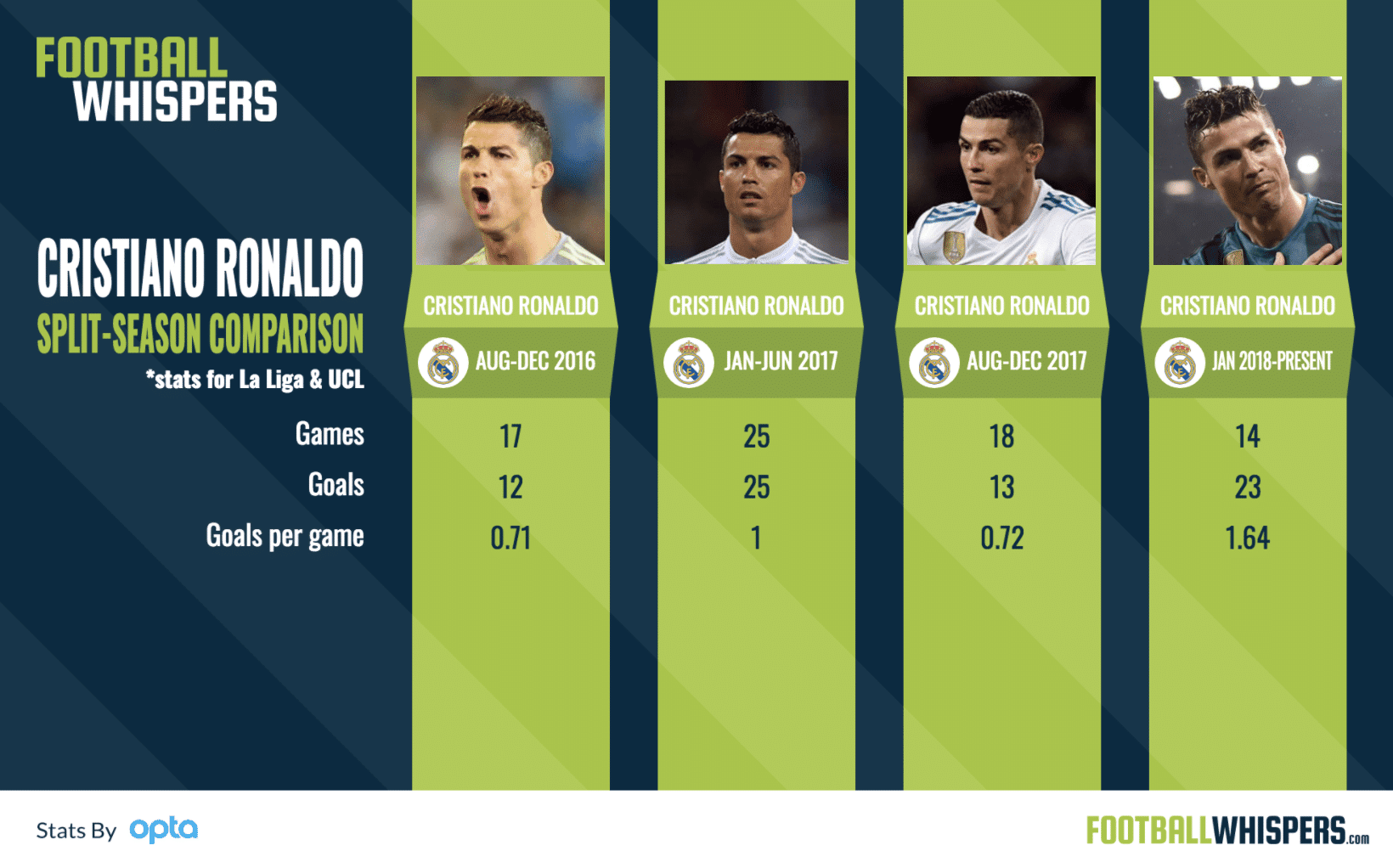 This term, after another sub-par opening half, Ronaldo is firing on all cylinders. And, while a title defence is off the cards, 13 points behind Barça in La Liga, few would bet against the 33-year-old delivering a third straight Champions League success for Madrid.

As the above graphic shows, Ronaldo has learned the art of peaking at the exact right time. Perhaps no longer able to perform at full capacity for an entire nine-month season, he has become a master of keeping his powder dry in the first half of the campaign, and producing breathtaking results as the Champions League knockout stages begin and the domestic calendar approaches its home stretch.

While 12 goals from 17 combined Champions League and La Liga games would represent peak career form for most mere mortal world-class forwards, it was something of a slump for Ronaldo, having set sky-high standards for himself since his £80million move to the Spanish capital in 2009.

But with an average of a goal a game post-January, and, in particular, ten Champions League goals from the quarter-final stage onwards, including a brace in the final and two earlier hat-tricks, the Portuguese superstar secured the fifth Ballon d'Or of his career, equalling Lionel Messi‘s haul.

The first half of the 2017/18 campaign was unusual for Ronaldo in that his form remained white-hot in the Champions League, scoring nine times in six group stage games, yet the goals completely dried up for him domestically.

Indeed, the Madrid No.7 had to wait until mid-October for his first strike of the season, away to Getafe, and then went more than a month before doubling his tally with a goal in November's 3-2 home win over Málaga.

Since the turn of the year, however, Ronaldo has been right back in Ballon d'Or fettle, netting an incredible 23 all-competitions goals in just 14 games.

In the last three games alone, the Portuguese hitman has found the net eight times, aided in no small part by a four-goal plundering against Catalan minnows Girona.

Although he may not be as fast as he once was, and he dribbles far less often than he used to, Ronaldo's goal-scoring instincts are sharper than ever.

He netted three times across Madrid's two-legged triumph over Paris Saint-Germain in the Champions League last-16, before bagging a stunning brace in Tuesday's quarter-final first-leg win at Juventus.

The key to Ronaldo's ability to remain relevant and one of the best in the world into his 30s lies in how he has been able to adapt his game, reinventing himself in line with his changing physical capabilities.

Where once he was a flying winger, capable of bursting beyond multiple opponents and a goal threat from any range, with either foot or head, he has now taken up a more central role, operating as a conventional striker and focussing his efforts of finding and scoring chances within the penalty area.

Now, not only is he moulding his skillset to aid his longevity, he is also managing his workload and ensuring he is ready to perform to the peak of his abilities when it matters most.

It used to be a common career trajectory for ageing attacking players to drop deeper as their powers declined, with strikers often filling in at centre-back and wingers becoming full-backs, but Ronaldo has subverted that trend by pushing further forward.

With his game now all about intelligent movement, short, sharp bursts of speed and aerial power, Ronaldo is one of the most ruthless goal-getters in world football. And having mastered the art of timing, he could be occupying the Ballon d'Or podium for a few more years yet.