One of the most notorious encounters in European football took place when Leeds United played AC Milan in the Cup Winners’ Cup Final of 1973. It's a game which still rankles with fans, players and officials to this day. But just what happened and why is the game remembered for being so controversial all these years on?

Leeds are no strangers to controversy, particularly in the 1970s. Don Revie’s side were often accused of underhand tactics in their pursuit of the First Division title in the early part of the decade and their 1975 European Cup final against Bayern Munich ended in a riot; but rarely has any game been as notorious, as infamous and as controversial as this one.

In all honesty, the 1973 European Cup-Winners Cup final was a terrible game. There was little skill on display as both sides seemed determined to win the game by kicking their opponents off the park rather than trying to play football.

Despite this being a huge European final at the time, Leeds’ came into the game at the Kaftanzoglio Stadium with their confidence at an all time low. As they took the field that night heavy clouds hung above the men in white shirts as well as the city of Limassol as a huge storm was about to break, both on and off the pitch.

They were missing a number of key players with Billy Bremner and Allan Clarke unavailable due to bookings in earlier rounds. There were other absentees in the form of the recently retired Jack Charlton, Terry Cooper, who had not played in more than a year, and the inspirational Eddie Gray was out with a thigh strain.

If that wasn’t bad enough, Leeds had just suffered one of the most humiliating defeats in the history of the FA Cup final at the hands of Sunderland at Wembley.

Rumours were doing the rounds that their influential manager and the man who had made Leeds into a force to be reckoned once again with was about to leave as soon as the game was over.

Don Revie was apparently being courted by Everton to be their next manager, and according to some accounts had even told some of his players that this game would be his last in charge.

“We appreciated his honesty,” said former Leeds legend Johnny Giles, who had apparently confronted Revie about his decision several days before the game. “We knew he wasn't going to fob us off in that situation, and he didn't. But Don said that the only reason he hadn't told us already was that he hadn't wanted to upset the players before the game. He had planned to tell us afterwards.”

All-in-all, it was hardly the ideal build-up to one of the biggest games in the club’s history and unbeknown to Leeds, it was about to get much, much worse. 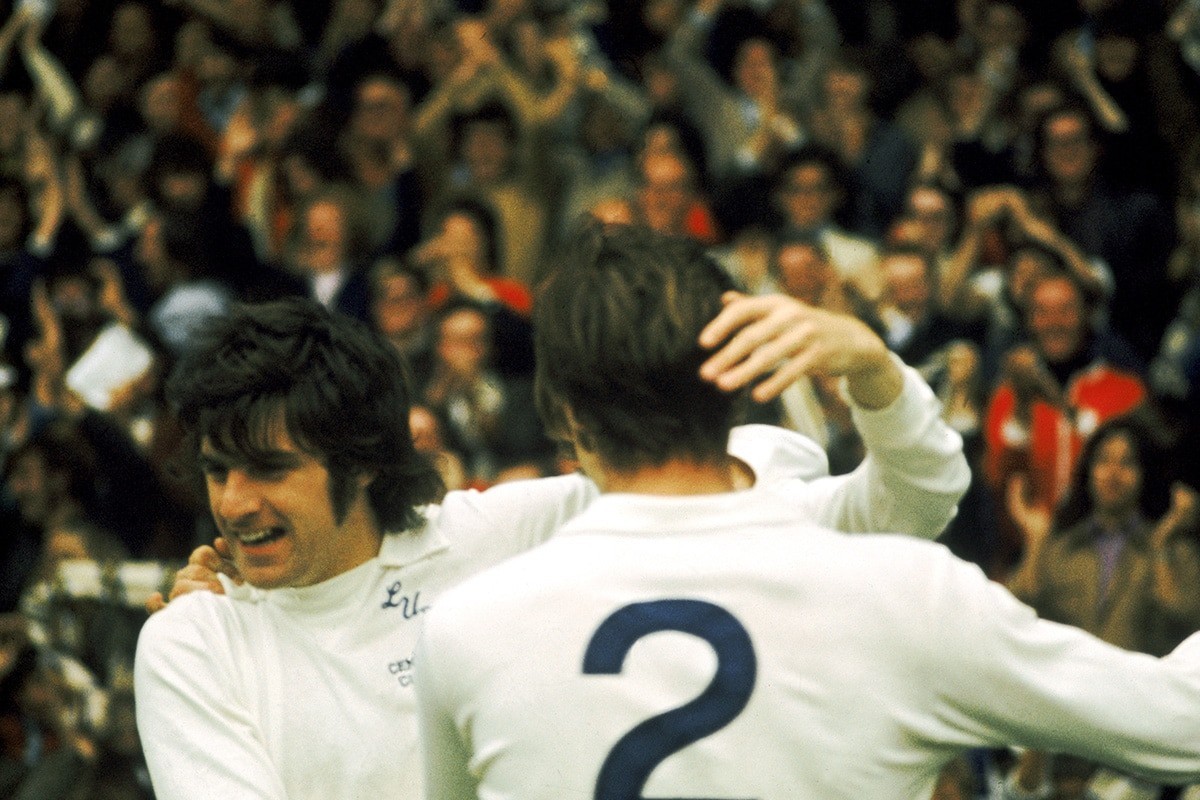 It’s hard to believe now but no TV coverage of the game was allowed that evening because Scotland were playing Northern Ireland in a home international game. With those not at the match relying on highlights the following night; but for those who did see the game, those grainy, black and white images would stick with them for years to come.

Milan were seen as clear favourites before the game as they looked to seal a double along with the Serie A title after their recent 3-1 defeat of Bologna left them a point clear at the top of the table – victory over Leeds would cap an incredible season for the Rossoneri.

Due to the many injuries and suspensions Leeds’ hopes lay with a string of youngsters and reserve players who had been brought in as cover; however, for many that night, they had no chance against a Milan team who had a considerable advantage, namely in the form of Greek referee Christos Michas.

Leeds knew they had a fight on their hands from the very first whistle and in the opening minutes, two very questionable decisions gave them a taste of what was to come.  When Mick Bates came crashing down after some neat skill the referee saw nothing doing and as Milan broke down the other end, Norman Hunter was then immediately penalised for the slightest of nudges, giving the Italians a free kick in a threatening position.

The decisions didn’t go unnoticed by BBC commentator Barry Davies either, who said: “Well, that's the second decision, one after the other, first the free kick not given and then the one given, both of them going against Leeds.”

How true his words turned out to be when Chiarugi drove the resulting free-kick low and hard past David Harvey, and the ball eventually came off the inside of the post and into the back of the net for the opening goal.

To add to their frustration Milan seemed able to kick their opponents at will, and after a Peter Lorimer free-kick was spilled by Vecchi in the Italians’ goal, Trevor Cherry had his legs swept away just as he was about  to capitalise on the keeper's mistake, still no penalty was given.

From another Leeds attack, Mick Jones was flattened inside the area, but once again the referee showed no interest in awarding anything. By now the crowd were aware that something was not right as whistling and booing could be heard around the stadium, not just from Leeds fans, but the locals too.

Despite the situation, United were still playing some good football. Their passing was fast and furious, and in Joe Jordan, they had a real threat in the air and on the ground, thanks to his ability to turn on a sixpence and leave his marker for dead.

Half-time arrived and Leeds, somehow, were only a goal behind, but it could have been worse with even commentator Barry Davies predicting that: “Don Revie will tell them, keep playing as they are and it will come.”

Leeds immediately brought on Gordon McQueen after the break and the big Scotsman made an instant impact.  His towering header being turned round the post by the ‘keeper. But as United pressed, tempers began to fray, with their opponents making the most of any opportunity to throw themselves to the floor.

Then another moment of controversy. Paul Reaney’s cross blatantly struck defender Benetti on the arm, but nothing was given as Referee Michas was unmoved, ignoring the protests and once more awarded a corner.

“The referee will have none of it, the Leeds bench going absolutely mad,” exclaimed Davies. From the resulting corner, Jones was flattened in the box, but again nothing was given. 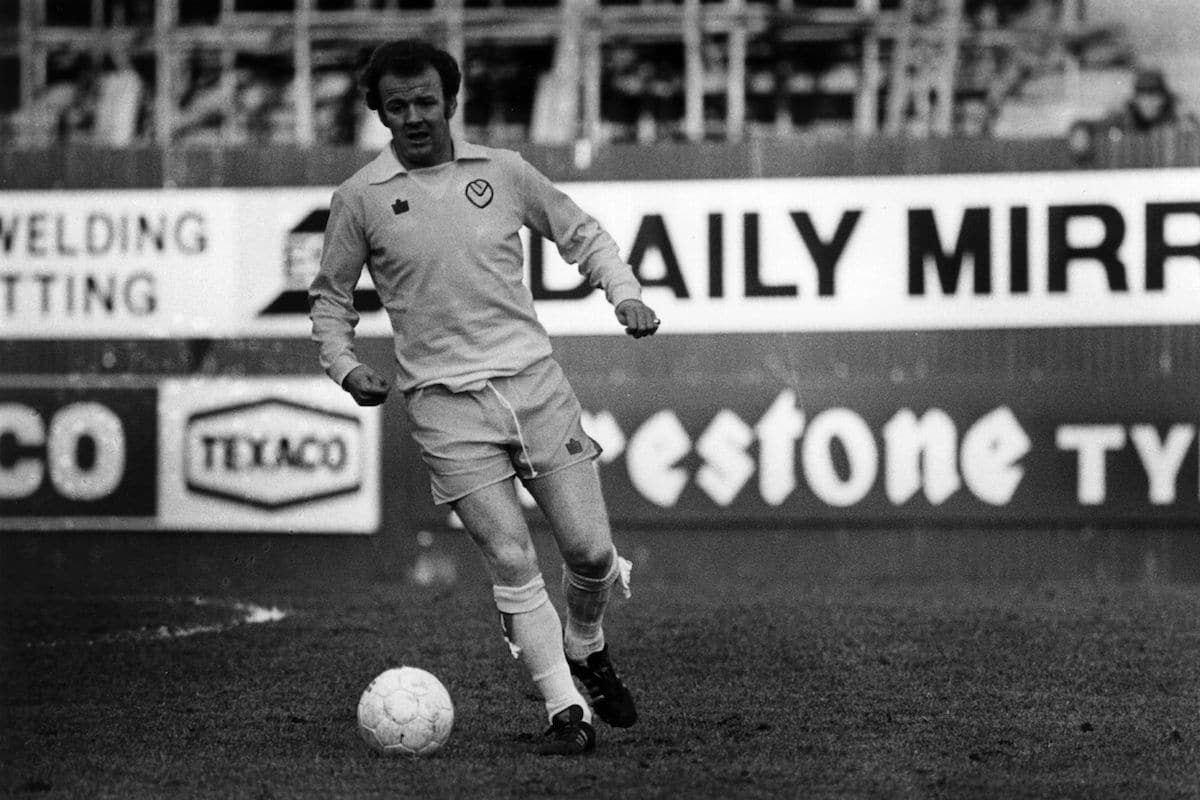 Read More: Where did it all go wrong for Leeds United

By now it was clear that something was seriously wrong and moments later the referee waved away another penalty claim, which once more attracted the anger of the local crowd as well as the healthy contingent of Leeds fans who had made the journey.

With Leeds already feeling cheated, Terry Yorath decided to play the role of vigilante, committing what can only be described as an awful assault on the goal scorer Chiarugi. Perhaps the only decision that did go Leeds’ way on the night was that he didn’t receive a booking for his actions.

In the dying minutes of the game, the frustration which had been building finally came to a head, and as Norman Hunter burst forward in search of an equalizer and was kicked from behind by Gianni Rivera. He continued running for a few yards, before turning round to push his attacker over.

Hunter was then bundled over by Ricardo Sogliano, who then kicked him in the chest for good measure. To complete a miserable night for the Yorkshiremen, Hunter was sent off along with Sogliano and seconds later the final whistle went to a chorus of boos and whistles from the Greek crowd.

Leeds left the field to a standing ovation while Milan’s lap of honour was interrupted by the huge amount of missiles that were being thrown onto the field by those who were dismayed by what they had taken place that night; not least from referee Michos. Milan were roundly booed as they paraded the trophy, as the locals sided with the beaten Leeds United team.

“We outplayed them in every department of the game,” was Don Revie’s post-match opinion. “If someone says we deserved three penalties; that would be the understatement of the year.”

Meanwhile, United’s Mick Jones didn’t hold back in his assessment of the referee’s contribution:“I played against one of the hardest players I've ever faced,” he said. “From the first minute their centre-back elbowed me, punched me in the back, spat in my face; he even tried to gouge my eyes; it was unbelievable. He was giving me a real hard time, but the referee did nothing.”

Claims that the match official had been bribed by Milan players and staff circulated soon after the game and have been rife ever since, as it was later revealed that Mr Michas had arrived on the same plane as the Milan players.

He was subsequently investigated by the Greek FA amid allegations that he had accepted illegal payments and never officiated a top flight game again, though UEFA refused to overturn the result of the game or bow to pressure to have the match replayed.

Petition to Replay the Final

Among the 40,000 crowd that night was an 18-year-old Richard Corbett, future MEP for Yorkshire and Humber and in March 2009 he launched a campaign in the hope of reversing the result. He set up an online petition to pressurise UEFA into a new investigation, which was signed by many of the members of the United team that night, along with 12,200 others.

But his work came to nothing, just like efforts to have the game replayed some 40 years later or for Milan to be stripped of the trophy and with the death of Mr Michas in 2010 it would seem some kind of natural closure has been brought to the proceedings, even if that night still lives long in the memory of those who witnessed it.

There would, though, be at least one silver lining to the clouds which overshadowed this most infamous fixture. The perceived injustice of that night is said to have persuaded Don Revie to shun Everton’s advances in order to have another crack at glory with his players, and the following season finally achieve a second First Division title.