Rochdale's form has perked up at the right moment and now they have a real chance of pulling off an incredible escape. Are Crewe their next victims? Find out with our Crewe vs Rochdale match preview with free tips, predictions and odds mentioned along the way.

The great escape is on

Just a matter of weeks ago Rochdale were dead and buried in League One. At least that's how it looked. Three wins on the bounce – including against the in form Blackpool – have transformed that though and we're making the prediction that they'll get another three points against Crewe. Crewe have won two of their last five but have taken just a solitary point from the last 12 available at home having shipped 11 goals. Given Rochdale have fought their way back into the scrap to stay up, it's unlikely they'll give it up too easily now.

A win and a clean sheet for Rochdale?

Rochdale kept Blackpool at bay in their last match to record their second clean sheet in five. That fact only form part of our reasoning for this prediction though. During the last 10 games, Rochdale have seen one team fail to score in half of those games. Where Crewe are concerned though, the story becomes much more compelling as to why someone will blank. Of their past 10 games only one match has ended with both teams finding the net.

Rochdale's Keohane has eight goals to his name this season. It doesn't sound that impressive until you consider he spent a lot of his time playing at full back. In the last month or so, he's played further forward and he's come up big in a couple of moments; namely in a draw with Peterborough and, in the latest winning run, he's netted two in the three games. Both of those latest strikes have been the match opener. Can he do it again?

Crewe vs Rochdale: Stats and more

Rochdale to keep fighting for survival

Crewe's season is over. It's as simple as that, they'll be in League One next season. For Rochdale that's what they're shooting for. It looked a distant dream four games ago; now nobody wants to write them off. A clash with a mid-table side could be the perfect opportunity to make it 12 wins in a row. 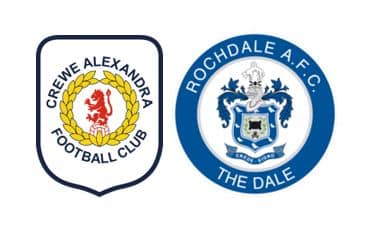