Both Crewe and Portsmouth have lost their respective games over the weekend and they will be looking for a better showing on Tuesday. You can learn more about the match in our preview and get a few betting tips along the way.

The best betting tips and predictions for Crewe vs Portsmouth

League One games are often hard to predict, but we have a few free betting tips to offer to you based on your research of the game:

Our recommended bookmaker for this match is Ladbrokes. However, odds are subject to change, so check them with your bookie before placing a bet.

Before losing their to Burton over the weekend, Portsmouth was on a four-game winning streak and they were cruising towards making the playoffs. That loss set them back a bit, but they will once again be able to count on the services of their top scorer John Marquis after he served a three-game suspension, which could be the boost to put them over Crewe.

These two teams are similar in their efficiency and the number of goals that is scored in their matches since both of them play games with an average number of goals just over 2.5. Additionally, both teams have gone over 2.5 total goals in three of their last five games, and their previous meeting this season ended with a 4-1 Portsmouth win. So, our prediction of over 2.5 total goals seems like a good bet.

Our last tip for this game draws from the previous two. As we said, we expect Portsmouth to win and we expect to see at least three goals in the game, so Portsmouth to score at least two seems logical. Portsmouth is pretty efficient in away games – they score 1.61 goals per game. Meanwhile, Crewe concedes 1.4 goals per game at home and they've conceded six in their last match against Oxford.

The latest odds and helpful stats for Crewe vs Portsmouth

You can find the latest odds from top bookies right here, along with some important stats to help you make the right bet.

A chance of redemption for Crewe – Crewe vs Portsmouth preview

After losing at home to Oxford 6-0 in the previous round of League One, Crewe Alexandra will try to put that embarrassment behind them and offer a better showing against Portsmouth. The team has two wins and three losses in their last five games and they are positioned in the middle of the table, far enough from any relegation worries. Crewe also has a few injured players that are questionable for the upcoming duel, including Callum Ainley, Daniel Powell, Oli Finney, and Josh Lundstram.

The former Premier League team and 2008 FA Cup winners are looking for a chance to get back to Championship next season. They are far from achieving a direct promotion but they are currently 5th in League One and seem poised to make the playoffs unless they go on a bad streak in the remaining 7 games. The team is in good form with four wins in their last five games, but the one loss came in the last round to Burton at home. Portsmouth will be glad to get John Marquis back after a three-game suspension, but they might miss Sean Raggett, Ellis Harrison, and Jordy Hiwula due to injuries. 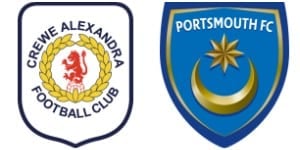