Oxford have seen their season fall apart in just a few short weeks. Lose to Crewe and they'll be leapfrogged moving them further down the table. Will it unfold that way? Find out with our Crewe vs Oxford Utd match preview with free tips, predictions and odds mentioned along the way.

Predicting the teams to cancel one another out

Crewe produced a decent display last time out to come away from Stadium MK with a 2-0 win; they haven't, however, recorded back to back wins since December. In addition, the hosts have lost their last two home matches. Oxford, who sit two points ahead of their opponent are on a poor run having won just one of their last five along with their last three away games. A draw would be an outcome both sides would be content with given their recent form.

Expect goals at both ends

Our next prediction backs both teams to find the net. Crewe have only recorded two clean sheets in their past 10 home matches but they have scored in nine of them. Oxford have produced a couple of blanks in their previous 10 away games but they've netted 17 goals across them too so they are a side capable of scoring. All things considered, this punt looks like decent value.

Our first two tips state our thought process that this fixture will end as a draw with both teams scoring. The next step is deciding how many goals will be involved. Crewe have been involved in nine league draws this season; seven ended 1-1. They've also scored just one goal in three of their last five matches. Oxford's goalscoring over their past five is similar; like their hosts, they've seen three of their last five end with them having scored just the solitary goal.

The all important stats and odds for Crewe vs Oxford Utd

A tight affair with both sides settling

Oxford's form over the last five games has been atrocious; it's seen them fall away from the playoff picture whilst Crewe's performances over the same timeframe has seen them collect nine points. That's a respectable haul. All in all, across the season so far, it means there is very little between the sides. With this a mid-table clash between two fairly comparable sides it promises to be a closely fought encounter.

All your answers for Crewe vs Oxford Utd 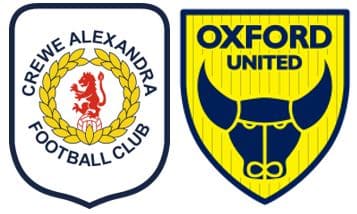