In a bid to turn around West Ham United’s ailing fortunes, David Moyes has brought in a change of shape. For recent clashes with Premier League table-toppers Manchester City and title-holders Chelsea, the Scotsman opted for systems built on three-man defensive lines.

The switch appears to have worked. Having taken the lead away to City, the Hammers lost narrowly 2-1. They then followed that up with a shock 1-0 win at home to Antonio Conte’s reigning champions. Aaron Cresswell has been, literally and figuratively speaking, central to the upturn.

A natural left-back, the 27-year-old has slotted in neatly to the left-sided centre-back role within Moyes’ back three. The quality of his individual displays in the new position has been particularly noteworthy when considering they came against two of English football’s strongest sides.

Here we analyse why this tactical development can not only aid West Ham, but could boost Cresswell’s hopes of making Gareth Southgate’s England squad for the 2018 World Cup in Russia.

While Moyes’ successor Slaven Bilić experimented with a back three, he never saw Cresswell as a viable option in central defence. On the basis of the Englishman’s first two outings in the position, it looks like astute judgement from West Ham’s new manager.

The below graphic shows where the former Ipswich Town man fits in within the back three. Against Chelsea, he started on the left of a defensive line that included Winston Reid in the opposite outer role and former Italy international Angelo Ogbonna in the centre. 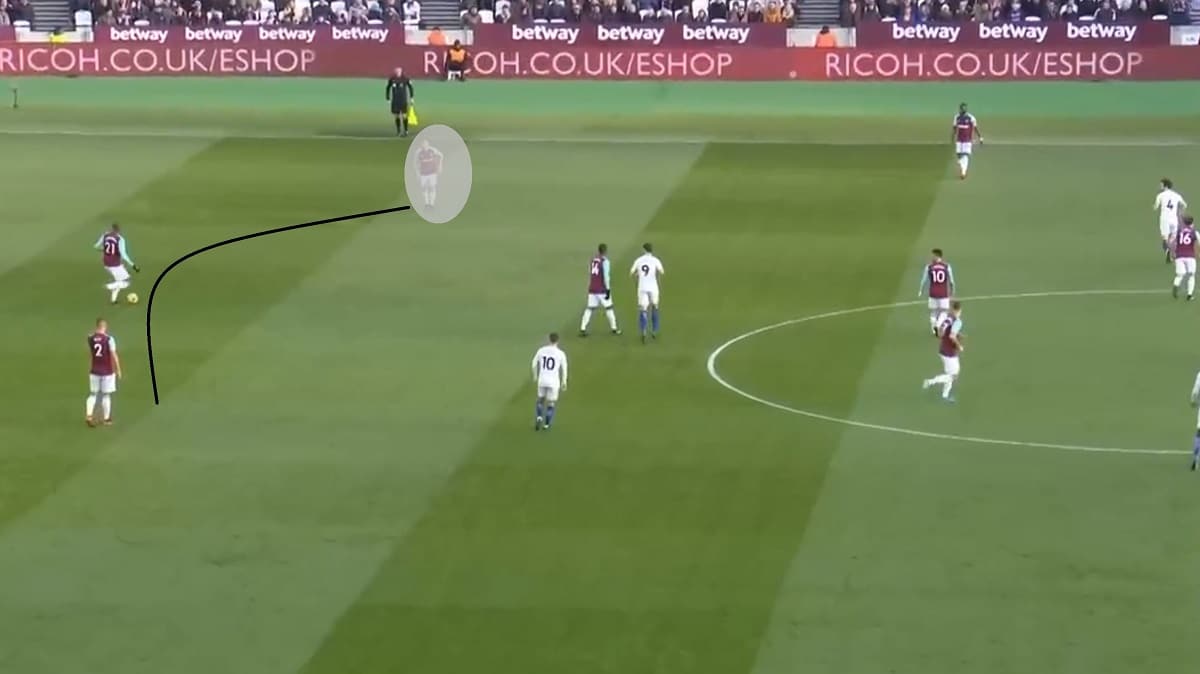 Cresswell defended attentively against both Manchester City and Chelsea in matches where his side rarely saw the ball. He had to show intelligence defensively, reading situations and moving accordingly, though he also was able to demonstrate his quality in possession, setting up West Ham’s goal against the former with a beautiful curled cross after a corner kick routine.

His importance to the team with the ball at feet was shown statistically by the fact he completed more passes than either of his central defensive team-mates in both games; indeed, in the Chelsea clash he made more than Ogbonna and Reid combined. He has maintained a pass success rate of over 70 per cent, while also contributing three key passes – more than any other Hammers defender in these games.

Cresswell has also provided support defensively. Away to Manchester City, he made one tackle, two blocks and eight clearances, while against Chelsea he made one block, three interceptions and five clearances. The numbers back up the notion he is appreciating playing under his new boss, something he discussed in a recent interview.

“Organisation is the key to everything, running, work ethic, and [Moyes has] certainly brought that since he's come through the door,” he said. “You've got to do the gritty things, the hard things, and he certainly works on that. It's work ethic. Especially when you're down in the relegation zone. You can have the best players in the world, but if you don't work hard you won't win games.”

West Ham lack quality passers at the back, but playing Cresswell in a three-man defence has rectified this issue somewhat. As could be expected of someone who likes to attack the left flank and supply accurate crosses, he is a highly efficient passer with the ability to pick out pinpoint balls.

This talent enables him to play through opposition pressure, which is something the Hammers have struggled with all season. Only Tottenham Hotspur have attempted more crosses. Additionally, only four Premier League teams have attacked more often down the flanks.

Evidently, West Ham have found it difficult to build structured attacks through the centre of the pitch, preferring – particularly when Andy Carroll is playing – instead to go from back to front directly through long balls over the top, or to go down the wings and fling crosses into the opposition penalty box.

There has been a heavy reliance on Manuel Lanzini to provide ingenuity and creative spark centrally; otherwise, it has been almost impossible for the team to play through the opposition. However, Cresswell’s emergence at left centre-back aids them in this respect.

Comfortable on the ball, he can pick a pass through the opposition block. Below are two examples of this, both taken from the Chelsea game. In the first graphic, he is faced with three opposition players but managed to find a pass through all of them to Lanzini in space between the lines. In the second he is under pressure from two Chelsea players, but still manages to pick out Pedro Obiang. 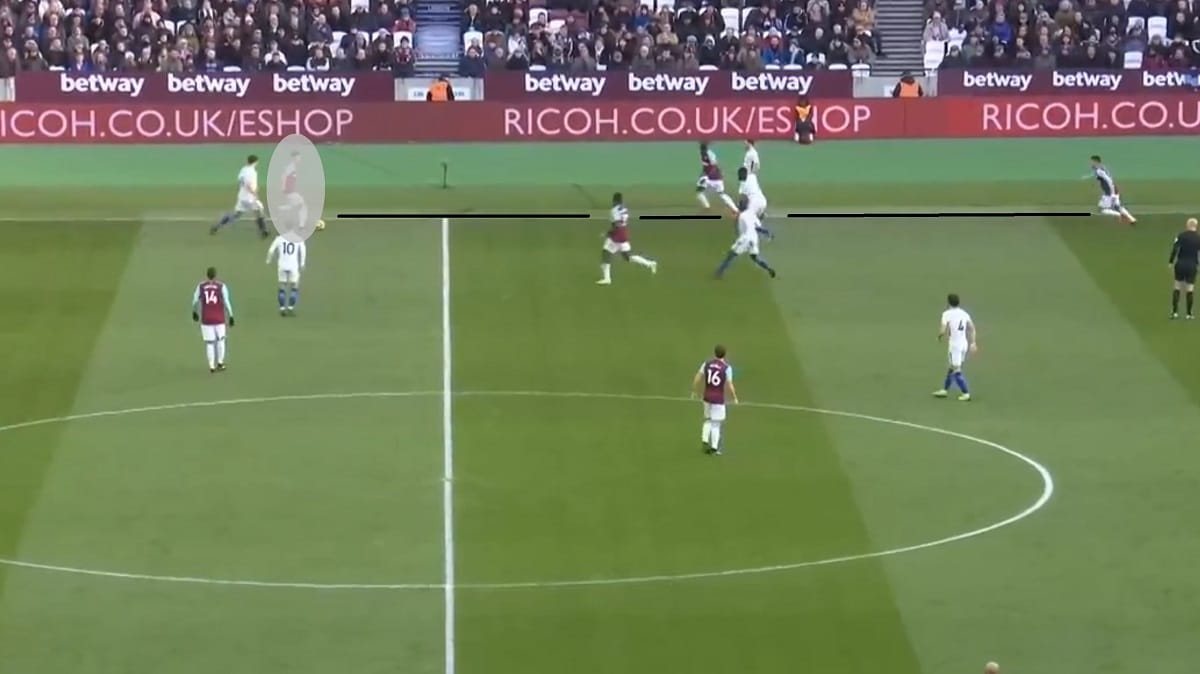 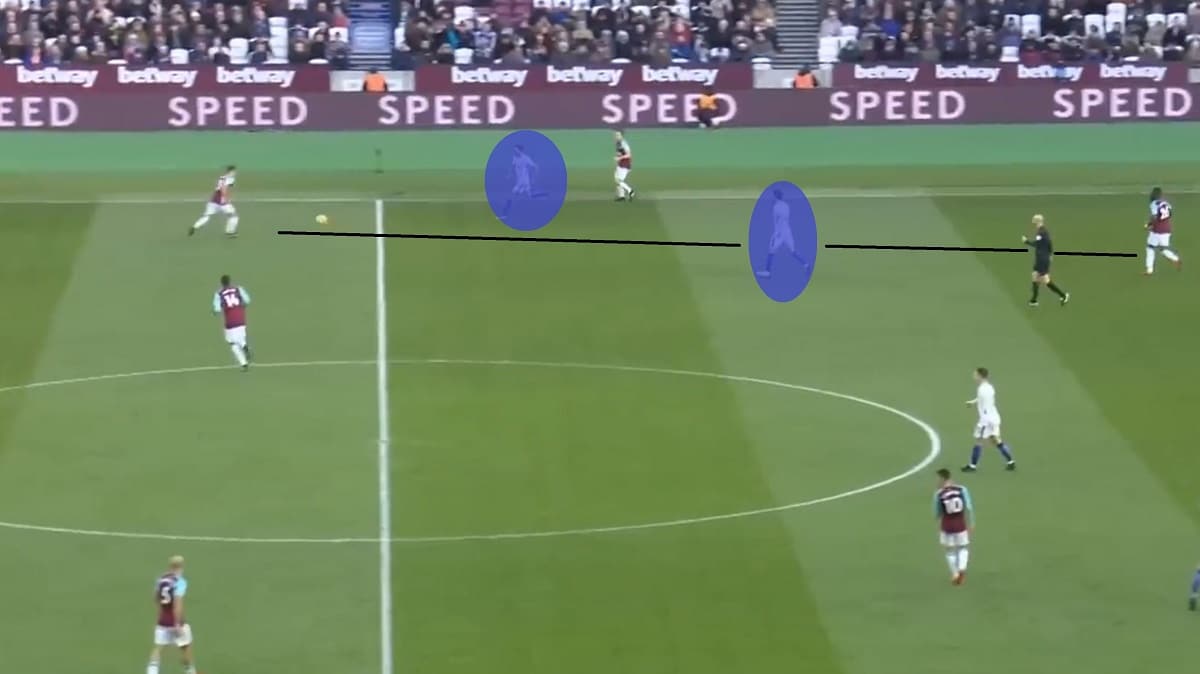 Cresswell is also not so easy to force into long balls. While he has the passing range to go direct accurately and find the likes of Marko Arnautović in the inner channel, he also possesses the touch and confidence to opt for the slightly riskier shorter pass when appropriate.

In the below example, he finds himself under pressure from a Chelsea player in close proximity. For many centre-backs, receiving a backwards pass in such circumstances is best met with a hoof up the park, but Cresswell coolly finds Mark Noble in front of him, eliminating one opponent in the process. 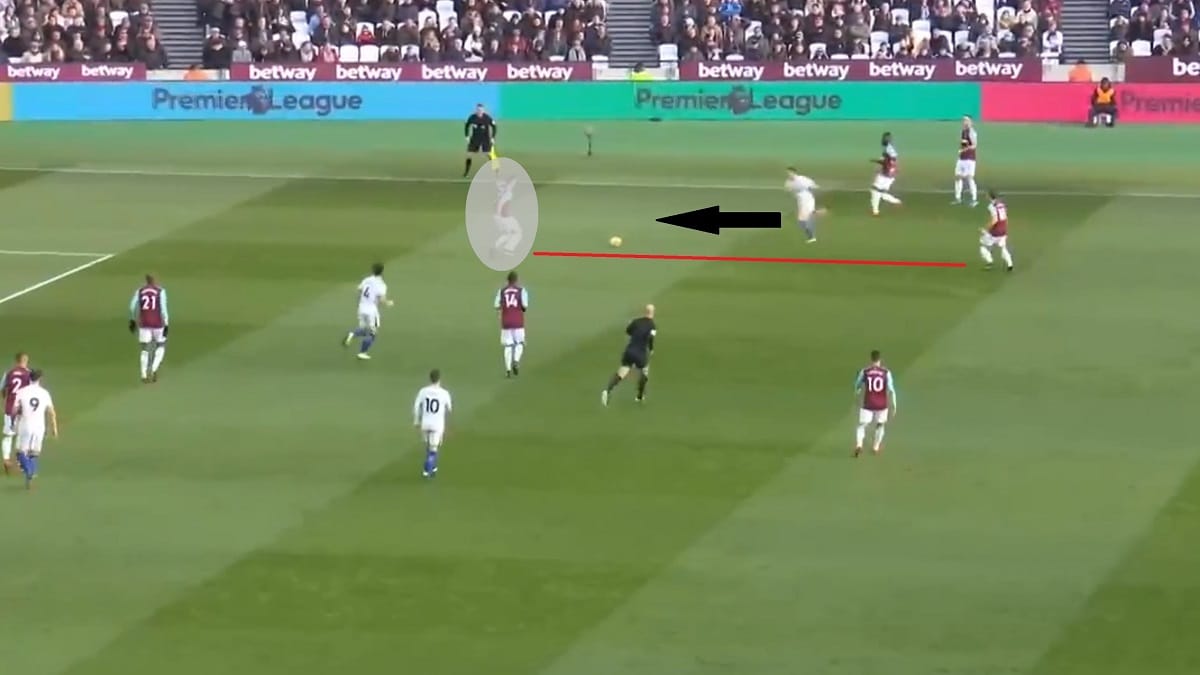 The obvious risk associated with utilising a 5ft 7in full-back in central defence is that he will be physically dominated, but there have been few signs of that risk outweighing the aforementioned benefits where Cresswell and West Ham are concerned.

He has shown himself to be an attentive marker, as evidenced in the below graphic, while also winning his fair share of aerial duels, making some crucial interceptions and displaying intelligent decision-making. 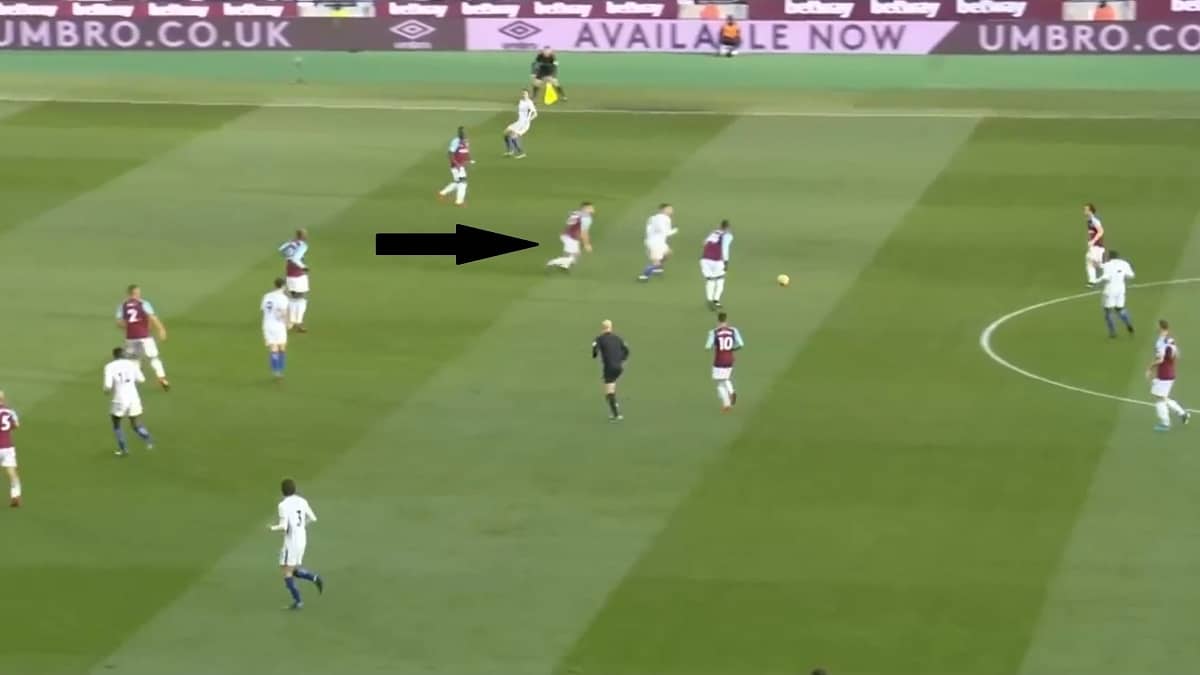 Another benefit of Cresswell’s playing in a back three is that it gives room for Arthur Masuaku to operate at left wing-back.

An aggressive, forward-thinking player who loves to push forward and attack the opposition, Masuaku has completed more dribbles per game than any other West Ham player this season – 3.5, to be precise – and could provide the sort of pace, energy and incision down the flanks that any system featuring wing-backs needs.

While Cresswell playing on the left of a back three benefits West Ham, it also benefits the player himself. This position gives him more angles to work with than when he is stuck on the left touchline and, with more of the pitch in front of him, there is more scope for him to maximise his distributive qualities.

If Moyes decides to continue with the back three – and, on the basis of the last two team performances he has every reason to – Cresswell could experience a late career progression that could even give him a fighting chance of being part of the England squad for next summer’s World Cup.

The Three Lions have used a three-man back line in recent fixtures as manager Southgate looks to ensure his side are fully prepared for the finals in Russia, but there is a severe paucity of naturally left-sided central defensive options.

While the likes of Gary Cahill, John Stones, Joe Gomez and Harry Maguire can, and have, played on the left of a back three, all are staunchly right-footed. The only real left-footed centre-back to be called up for England in recent times is Ben Gibson, but he is currently playing in the second tier with Middlesbrough and has not yet been capped at senior international level.

This could be a problem for Southgate’s side when they come up against intelligent pressing units. Forced wide, the left-sided centre-back would have to go back to the goalkeeper or play a pass with their unflavoured left foot. But, were Cresswell starting in the role, this problem would be eradicated.

Everyone stands to gain from Cresswell’s reinvention. The player could prolong his career at the top, while West Ham and England would get the sort of left-sided, ball-playing centre-back they so desperately need.