Liverpool are expected to finalise the deal to bring Mohamed Salah to Merseyside in the next couple of days. As soon as the Egyptian has put pen to paper on his contract the club will divert their attention to other areas of the team that need upgrading.

According to James Pearce of the Liverpool Echo, Jürgen Klopp’s wish-list includes a dominant centre-back, a reliable left-back and a dynamic central midfielder.

The Reds have been in the market for a left-back for quite some time, there’s no secret there, but the wording of the report suggests the profile of the potential arrival has changed.

Liverpool transfer rumours over the past couple of months have implied that the club are in the market for highly-rated full-backs with an abundance of potential to takeover from James Milner, the current incumbent of the left-back role, over the next couple of years.

However, with youth comes inconsistency. If Liverpool are now after a reliable left-back, as the report states, then perhaps they’ve moved away targeting the likes of Ryan Sessegnon, Ben Chilwell, Josh Tymon and even Andrew Robertson.

One player who falls into the new category is West Ham United’s Aaron Cresswell. The 27-year-old has been tentatively linked in the past with a return to the club who released him as a youth player just over a decade ago.

Would a move for Cresswell make sense?

Sometimes who a player supported as a kid can be given too much weighting. Football players are naturally competitive and it's the environment in which they develop and mature that will have a lasting impact.

Take, for example, former Liverpool greats Steve McManaman, Robbie Fowler and Jamie Carragher. The trio, as kids, were Everton fans but after coming up through the ranks at Liverpool formed a bond with the club and the fans. They may have been blues but they celebrated a win in the derby like every other red.

They not only understood the history of the club, but they appreciate it too along with the fans. It was evident in their performances on the pitch. That's not to suggest it's just a scouse thing either.

There are plenty of examples of signings embracing the city of Liverpool and becoming adopted scousers. It's undeniable, though, that there's something unique about a local lad turning out for Liverpool. They seem to find that extra ten per cent from somewhere.

Carragher during the 2005 Champions League final, putting his body on the line when he was riddled with cramp. Steven Gerrard coming up with a moment of magic more times than you can count. Even Jon Flanagan during the 2013/14 title challenge and the following season when he was at his snarling best to keep Raheem Sterling quiet.

It could arguably happen with Cresswell too. He not only supported the Reds as a youngster but grew up in their academy too. There's unfinished business between him and the club and it could see him take his game up another level. Despite the rejection he's still a fan, as shown by him touching the This is Anfield sign when West Ham last visited Merseyside.

In 2016, just before he was set to make his England debut, Cresswell did an interview with the Telegraph and he opened up about being rejected by his boyhood club, saying:

“I couldn’t get my head around it at first. They pull the parents to one side and tell them, ‘It’s not to be but it’s not the end’. I was devastated. As a kid, you are in a bubble of playing for Liverpool. It was all I had done for two years and I had enjoyed it so much. It wasn’t about a job, or thinking, ‘I won’t make it’. It was about playing for the club I supported. Everyone around me was a Liverpool fan. It was just purely for the love of football.

“My dad said, ‘It is not the end of the world. Go back with your mates. Just play with a smile on your face and enjoy it’. That’s what I did. I went back with the lads.”

He channelled that disappointment to excel at Tranmere Rovers, impress while with Ipswich Town and put in consistent performances for a transitional West Ham. 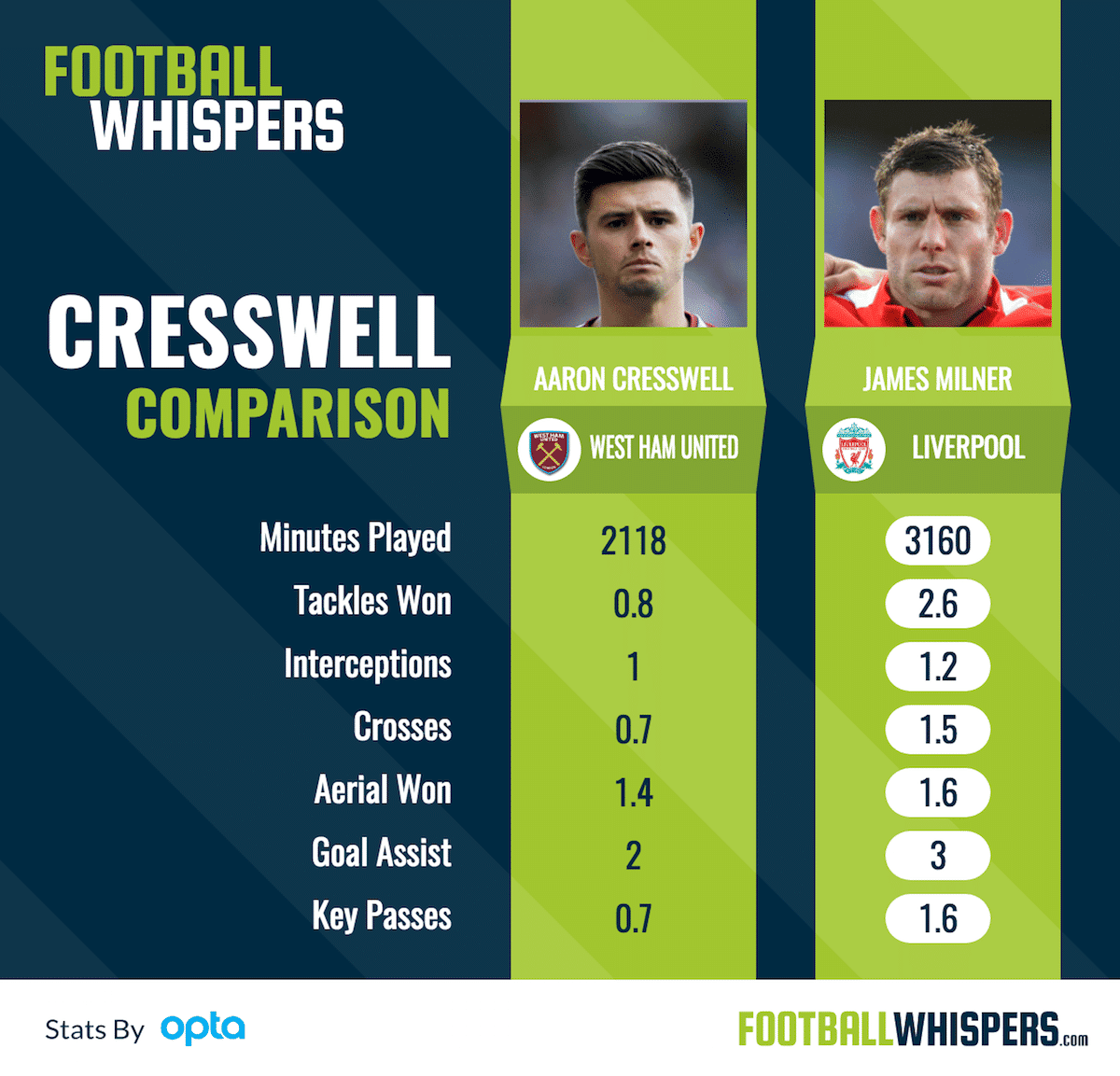 While the above graphic doesn't paint Cresswell in the best of light, a lot of context needs to be taken into account. He played fewer minutes than Milner and played in a mid-table team with a different system to Liverpool's.

However, he made considerably less tackles than Milner which shows he's not as positionally erratic as Milner and he's not as rash with his judgement. Many believe one of Cresswell's biggest strengths is his crossing ability, yet he averages half the amount Milner does per 90 minutes.

If he's instructed to get more balls into the box and utilise that trusty left peg of his that can only be a positive.

He played as part of a 3-5-2 formation Slaven Bilić opted for on occasion which is similar to how Liverpool line up when dominating possession. The full-backs in the Liverpool system push on to act as wingers and the deepest midfielder drops between the centre-backs. He is, in theory at least, able to occupy the left flank on his own.

Furthermore, as shown towards the end of the season, Liverpool had trouble breaking teams down because their full-backs, Nathaniel Clyne and Milner, weren't getting into dangerous behind the opposition's counterparts to really stretch them.

Cresswell gets into those dangerous areas. He's happy to hit the byline and because he's naturally left footed he probably even favours being in those areas. His combination play is good and he links up well with the midfielders.

Of course, he's not perfect. Over the past three seasons his errors have resulted in ten goals for the opposition. He can sometimes be wasteful on the ball and with Liverpool directing a lot of their play through the full-backs – Milner averages 60 passes to Cresswell's 30 – this is an area he needs to work on.

It may be tricky to strike a deal with West Ham too. The club don't have to sell him and his existing deal runs until 2021. They could command a fee in excess of £20million due to his age, contract situation and the fact he's English.

It will be interesting to see whether Liverpool cast an admiring glance the way of Cresswell after reportedly missing out on a number of left-backs already this summer.