The Crawley vs Fulham duel in the upcoming round of League Cup will be played on Tuesday, August 23rd. Let's take a closer look at this game and what we can expect from it.

Our best Crawley vs Fulham betting tips and picks

If you are struggling to find the right bet for the Crawley vs Fulham duel, check our top betting predictions for this match:

Fulham to Win with Handicap (-1)

The returnee to Premier League remains undefeated after the first three rounds, during which they had one win and a couple of draws. Meanwhile, Crawley only managed to win one point from the first five rounds in League Two.

Clearly, the guests should have little problems in this match, even with their reserve team playing. With that in mind, we expect to see a win for Fulham by at least two goals.

Since we expect Fulham to win this game by two goals or more, we can also see the match going over 2.5 total goals. Wecould see Crawley chip in some goal as well, but we wouldn't be surprised if the guests did all of the scoring.

While it's clear who the favourite is in this match, we can still see a fun game. So, let's take a better look at each team now:

The new season started in a very poor way for Crawley since the team only managed to draw once in the first five games of League Two, along with four losses. In fact, the only bright spot for Crawley so far has been their win over Bristol Rovers in the previous round of the EFL Cup, but now they will have to try and overcome a much tougher obstacle.

Meanwhile, Crawley will be without Tony Craig since he is suspended for this match, while Dion Conroy and Ludwig Francillette are questionable, but likely to play.

After a historic last season in Championship, Fulham entered the new season in Premier League with a lot of confidence and in great rythm. So, after the first three rounds, Fulham is in the seventh place with five points and they are proving all doubters wrong so far, especially their best scorer Aleksandar Mitrovic.

Of course, Mitrovic and many other starters will get some time off now, while Harry Wilson, Joe Bryan, Manor Solomon, and Neeskens Kebano are out with injuries.

The best odds and important stats for Crawley vs Fulham

If you want to bet on the highest odds for Crawley vs Fulham, check our selection of odds from various UK betting sites: 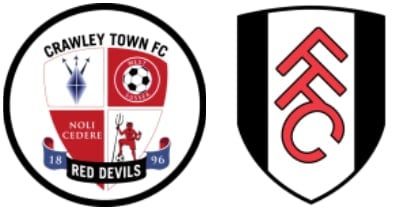