Peterborough brought their five game winless run to an end last time out. How will they get on as they visit a high flying Coventry side?

Find out with our Coventry vs Peterborough match preview with free tips, predictions and odds mentioned along the way.

Coventry vs Peterborough: Our top tips

We kick off our predictions by backing Coventry to win. The Sky Blues would be top of the league if only games played at home counted having won four from four. They've also won four of their last six games in general losing just one. The contrast of Peterborough's form is quite remarkable. Yes, Posh won 3-0 last time out but that was at their home ground. Away from home is another story; they've played four and lost all of them. With one side good at home and the other poor away, surely this only goes one way?

Next up in our trio of predictions is that the match will contain at least three goals. Coventry have played five home games this season – four league and one cup – and have gone over 2.5 on three occasions. Their goal average is just shy of the all important cut off at 2.4 but that looks less relevant when viewing Peterborough's form. Four of their past five away games have gone over 2.5. In terms of game averages, it's rather eye watering with a total of 21 goals being scored. That's 4.2 per game.

Both teams on the score sheet

With our final tip we are plumping for both teams to score. Coventry have scored in four of their last five outings including the last three. Peterborough meanwhile have bagged in their last three and do seem to have found their shooting boots in recent weeks.    You might look at Coventry's defence and point to that but Peterborough do have some creative threats and the last five meetings between the pair have seen goals on both sides.

The best odds for Coventry vs Peterborough

Coventry have made a very strong start to the campaign with their home form the driving force of their league position. Of course, they are now back at their true home too and Viktor Gyokeres is seemingly relishing it with three goals in his last four home games. For Peterborough, they have had a tough time after coming up to the Championship. Their confidence will be high after their last game though with Jonson Clarke-Harris and Siriki Dembele both impressing.

Final questions on Coventry vs Peterborough 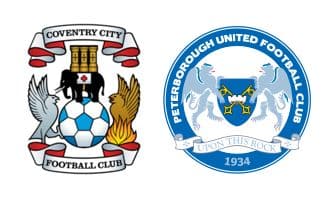