Are Coventry flying? No. Are Middlesbrough flying? No. Both look like they'll be decent enough Championship outfits though. Who will come out on top here?

Find out with our Coventry vs Middlesbrough match preview with free tips, predictions and odds mentioned along the way.

Boro winless away record to continue

Coventry have made a steady if unspectacular start to the campaign and find themselves in a healthy seventh position. A big part of that is their home form, which has seen them take maximum points from their two games back at the actual home ground. Middlesbrough meanwhile have failed to win any of their two away matches this season; although they have drawn both. The more general form favours the hosts though with three wins in six compares to Middlesbrough's solitary victory in the same time period. It's that reason we think Coventry will edge it.

If we umm'd and ahh'd over where we stood on the match result then the total goals market was a much easier prediction to make. Coventry have seen three of their five league games fall short of the 2.5 mark, which is also a true statement for Middlesbrough. In terms of game averages, Coventry have seen a total of 10 goals, which is 2.0 per game compared to the slightly higher 12 goals Middlesbrough's games have serves up; at 2.4 that's also under the all important cut off.

Coventry to lead at the interval

Our final prediction is that Coventry will be leading the match at half time. We've made it clear that we think the match will be low scoring and that the hosts will win. The reason we think they'll be leading at half time is because neither Coventry or Middlesbrough have much form for keeping things level at the interval. Coventry have only been tied at the interval once in the last five whilst Boro have been level at half time twice in their previous five.

Key odds and stats for Coventry vs Middlesbrough

A dull home win on the cards

Mark Robins will be moderately happy with how his Coventry side have started the season. They're back at their true home ground now and are yet to drop a point there whilst they've not been uncompetitive elsewhere either. Goals haven't been raining down for the Sky Blues though and they'll hope Martin Waghorn soon finds his shooting boots. For Middlesbrough, wins have proven a tough thing to collect with just one to their name so far. That said, they're not an easy team to beat either. If Uche Ikpeazu can keep his form up though, they'll start winning games soon enough.

Pre-match questions for Coventry vs Middlesbrough 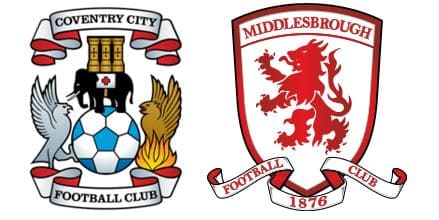