There might only be one point between these sides as they sit third and fourth respectively in the table but they didn't half have different experiences midweek. Who will come out on top when they meet? Find out with our Coventry vs Fulham match preview with free tips, predictions and odds mentioned along the way.

When you've just been tucked up 5-0 on Wednesday the last thing you want on Saturday is a contender for automatic promotion to come a knocking. Unfortunately, that's what awaits Coventry. The good news for the Sky Blues is that they seem to be a different animal on their own patch. Will Fulham hit them for five? No, we don't think so. We also don't see Coventry getting anything from the game though; Fulham looked bang in form in their midweek win.

Our next prediction looks at the over or under 2.5 goals market. We're opting for over 2.5 despite the stats telling a mixed story. Coventry's average across their 10 league games is 2.3 per game, which obviously isn't beyond our target. Thankfully, in Fulham we have some numbers that carry our prediction through. They've averaged 3.1 goals per game this year with their away form even stronger at 3.4. Given Coventry have just shipped five whilst Fulham fired in a trio of first half goals it looks like a combination that should serve up goals.

The performance Aleksander Mitrovic turned in on Wednesday evening makes it basically impossible not to include him as an anytime scorer tip. Not only did he bag a first half hat-trick in the 3-1 win over Swansea but every single one of his strikes was of the highest quality. It also puts him on top of the scoring charts with 10 goals for the season and he now has five goals in his last four matches. Given the torrid time Coventry's backline had at Luton, they might be having nightmares about Mitrovic already.

Find the best odds for Coventry vs Fulham

Coventry vs Fulham: A quick overview

What do you do as Coventry manager? After having the stuffing knocked out of them in the week it's either going to be wholesale changes or very few alterations as they look to hit back. Given they sit top of the ‘home table' we expect the latter. That means Viktor Gyokeres will be the main danger man whilst Simon Moore will hope for a quieter day in the goal. Fulham's form had just threatened to stutter a little with three games without a win but they looked a class apart as they got back to winning ways. Mitrovic is a huge threat. Harry Wilson could have a big say in the match too,

Our final thoughts on Coventry vs Fulham 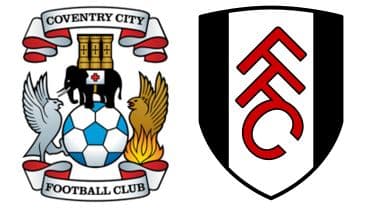