Coventry vs Barnsley: Check out our betting tips

Barnsley snapped a 15 game winless run last time out. Can they make it back to back victories here? Find out with our Coventry vs Barnsley match preview with free tips, predictions and odds mentioned along the way.

Sky Blues to win it

Coventry might only have four wins in their last 10 games but two of those games have come against sides in the Championship relegation zone; that's a bad omen for basement club Barnsley. Another bad omen you can point to is the fact that the Tykes have just won a game; they'd only won two before that this season and both times it's been followed up with defeat. Coventry also boast a superb home record against Barnsley; of the last 12 games they've won 10 and drawn two.

It won't be one for the neutrals

Our next tip for this match is an under 2.5 goals prediction; we don't envisage seeing many goals here. Four of Coventry's last five matches have gone under the 2.5 mark with Barnsley having the same record; again just one of their previous give games has hit three goals. In terms of averages, things make pretty good reading for an ‘under' bet too.  Coventry's season long average sits bang on the money at 2.5 goals per game but Barnsley's average is just 2.1. The last three head to heading meetings have all gone south of 2.5.

Here are the key stats & form guide for Coventry vs Barnsley

If Coventry fans feel sorry for themselves as their promotion hopes have ended dashed and ultimately in midtable then spare a thought for Barnsley's faithful following; the Tykes look all but doomed to drop into League One.

In the early part of the season Coventry were right in the mix at the top of the league to the point where a top two finish was being quietly whispered amongst Sky Blue fans. It hasn't worked out but with a winnable game like this ahead, they can still look on the bright side moving forwards – providing they take maximum points, of course!

Where, oh, where do you start with Barnsley? They were a really solid outfit last season but this year has been a disaster with just three games won all season. Of course, one of those came last time out, which might offer a glimmer of hope but they need to follow that up here if it's going to trigger any momentum for their season. 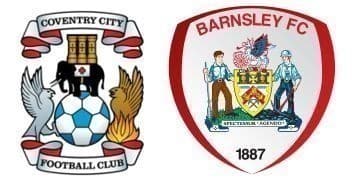