Paris Saint-Germain‘s world-record signing of Barcelona superstar Neymar has quickly become the story of the summer, with the Parisians meeting the forward's €222million release clause to complete a staggering deal last week.

The Brazilian's departure from the Camp Nou leaves a gaping hole in the Barça team and a wad of cash in the coffers with which to fill it. Liverpool‘s Philippe Coutinho is a Barcelona transfer target and Radio Catalunya claims the playmaker has agreed terms on the move.

However, rather than replacing Neymar, Coutinho would be much better suited to a deeper midfield role at the Camp Nou, a progression he has been moving towards on Merseyside and one that could stand him in perfect stead if he makes Catalonia his new home.

Coutinho As A No.8

Liverpool fans have become accustomed to seeing Coutinho operate on the left flank, from where, as a right-footer, he invariably looks to cut inside and carve open opposition defences with his creativity or unleash a rasping shots from distance.

In this role he has developed into one of the most prolific attacking threats in the Premier League over the last few years, regularly the man to unpick a stubborn backline for the Reds, producing moments of inspiration and jaw-dropping ingenuity.

However, towards the end of last season, as Jürgen Klopp looked to maximise his side's attacking potential to embark upon one final push to ensure a top-four finish. This meant the Brazilian was deployed as an advanced, roaming playmaker in he No.8 position.

Coutinho took to his new role with alacrity and set about pulling the strings in the Reds midfield, dictating play, linking with the forwards and timing runs into the penalty area.

In Liverpool’s final two games of last season — a 4-0 win away to West Ham United and a 3-0 victory over Middlesbrough at Anfield – Coutinho was unplayable, scoring three times and registering an assist across the two games.

His average of 81.5 passes at a completion rate of 89.45 per cent over the two fixtures showed that he is not only able to become more involved in his team's general play than he was is to, but he appeared to take to the role naturally.

Coutinho's creative instincts and ability to carve open the opposition was unhindered by his deeper starting position too, completing a combined nine dribbles and seven key passes in the two matches. 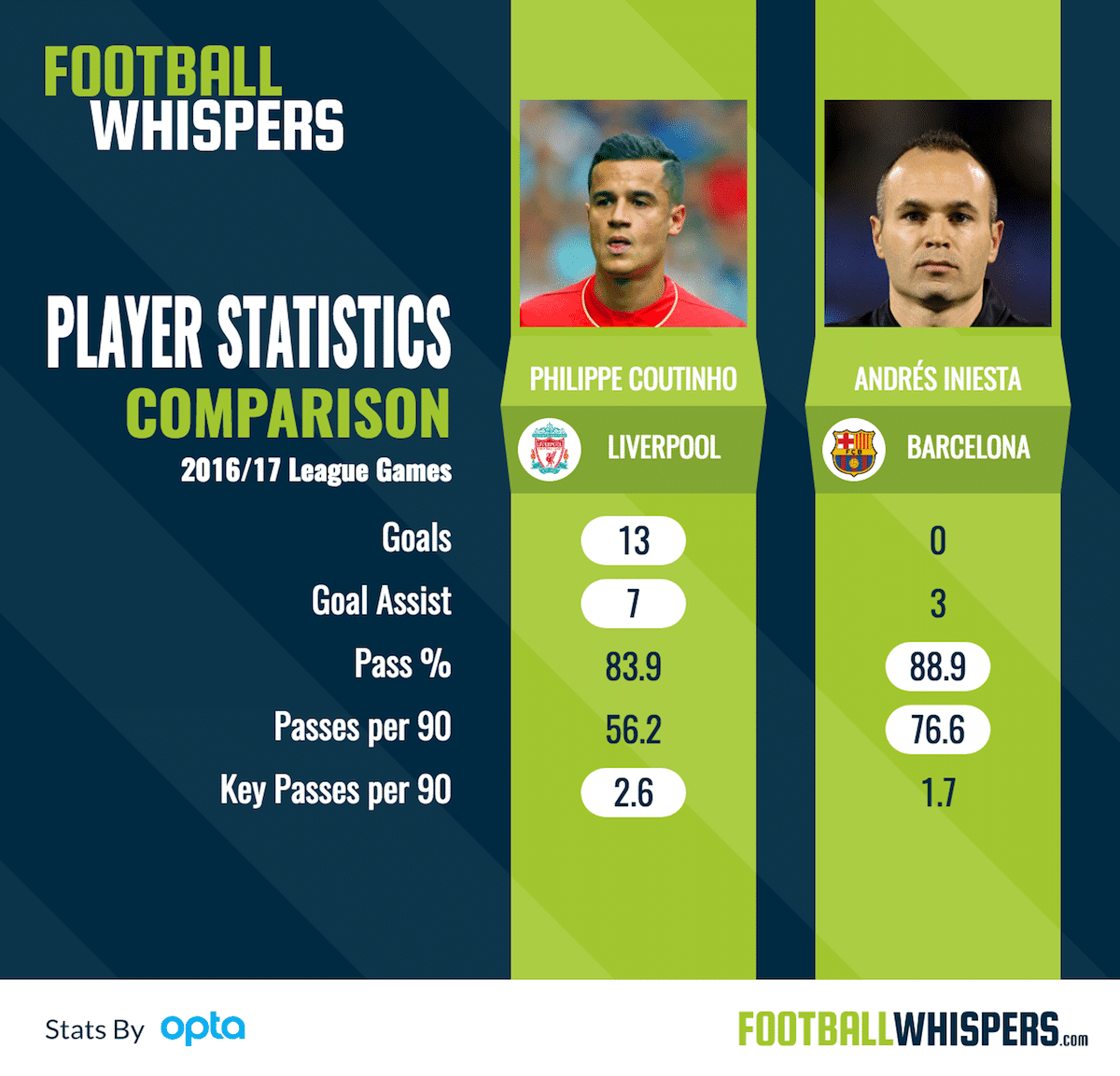 It must be noted that Coutinho's superlative midfield performances came against one side already relegated and another with nothing to play for, whereas Iniesta has built a career on running proceedings at the very highest level.

But the signs are there. Coutinho may not yet be a midfield maestro on the same level as Iniesta at his peak but, in truth, no such player exists. The 2010 World Cup winner will be remembered as one of the all-time greats in his position when he retires; he has set the standard for his generation.

But that is why it is imperative that Barcelona manage his inevitable decline carefully. Iniesta will turn 34 during the coming season and the injuries are beginning to mount up. New Blaugrana coach Ernesto Valverde must be mindful of picking and choosing the right times to utilise the diminutive geniuses vast gifts; it's no longer a well that he can go to very often.

Marco Verratti is said to be a Barcelona transfer target and the PSG playmaker is undoubtedly a world-class talent. But the Italian is not Iniesta.

Verratti is at his best slightly deeper than the Spaniard, conducting play and manoeuvring his team-mates into advanced positions without straying too far forward himself, lacking Iniesta's remarkable dribbling ability and burst of pace over short distances.

In many ways Verratti would be more of a belated replacement for Xavi than the successor to Iniesta were he to arrive at the Camp Nou.

Coutinho, though perhaps not the obvious choice for the task, has the skill set, temperament and off-the-cuff ability to conjure something out of nothing that could see him assume Iniesta's throne.

What's more, the opportunity to work alongside the 119-cap Spain international, to learn the tricks or the trade and the nuances of life as Barcelona's midfield creator in chief, would be invaluable for Coutinho's development.

Klopp is adamant that Liverpool won't be bullied into parting ways with their star man; if Barcelona are serious about the Brazilian, they'll have to spend big, likely breaking their transfer record.

But Iniesta needs an heir, and Coutinho is one of the few players in the world capable of filling his boots.