Anfield plays host to Champions League football tomorrow night for only the fifth time in eight seasons. Liverpool welcome Sevilla to Merseyside to kick off their Group E campaign, with revenge for the defeat in the 2016 Europa League final no doubt at the forefront of their mind.

A lot has changed since the defeat in Basel. The La Liga side are onto their second manager since Unai Emery, the mastermind behind their success over the Reds, moved on to Paris Saint-Germain.

Jorge Sampaoli managed them to a fourth place finish before moving on to take over as the head coach of the Argentina national team.

Eduardo Berizzo, whose Celta Vigo side reached the semi-finals of the Europa League last season, arrived at the Ramón Sánchez Pizjuán Stadium in the summer and guided them past İstanbul Başakşehir to ensure a place in the group stages.

Despite head transfer honcho Monchi leaving to join up with Roma in the summer, the Spaniards continued to impress in what quickly became an inflated and volatile transfer market.

How Could Liverpool Line Up With Philippe… by FootballWhispers

Jesus Navas returned to the club on a free transfer and was joined by former Manchester City teammate Nolito. Éver Benega spent an underwhelming year with Inter Milan before opting to return to the club in a deal worth €10million.

Sebastian Corchia arrived from Lille for a bargain €5million fee and the club managed to tempt Luis Muriel into coming back to Spain.

The Colombian, who averaged a goal every three games for Sampdoria last season, had a disappointing loan spell with Granada during the 2010/11 campaign. The 26-year-old, who has been a reported transfer target for Liverpool in the past, cost €20million.

Liverpool haven't stood still in this time either. They've added Sadio Mané and Mohamed Salah to their attacking ranks to give them one of the most fearsome attacking units in Europe, while Alex Oxlade-Chamberlain and Gini Wijnaldum bring added energy to the midfield.

It's not just the personnel that differs, though.

Jürgen Klopp's tactics have evolved since he arrived in England. Gone is the heavy metal approach and in it's place is a more balanced, possession orientated style. They, of course, like to play on the counter attack whenever possible but the majority of teams they come up against aren't naive enough to allow them to do that.

However, with Sevilla still going through something of a transitional period and coming to terms with how Berizzo wants to play, Klopp might be wise to revert back to a more full-on approach.

The relentless high press may be their best weapon on Wednesday night.

Under Berizzo, Sevilla play a variation of a 4-1-4-1 and a 4-3-3. While most teams these days operate with wide forwards cutting in field and leaving the flanks to their full-backs, the Spaniards don't do this.

The manager has his full-backs push on into midfield positions while the deepest midfielder, usually Barcelona transfer target Steven N'Zonzi, holds his position just ahead of the centre-backs.

It means there are more defensive lines for the opposition to play through. 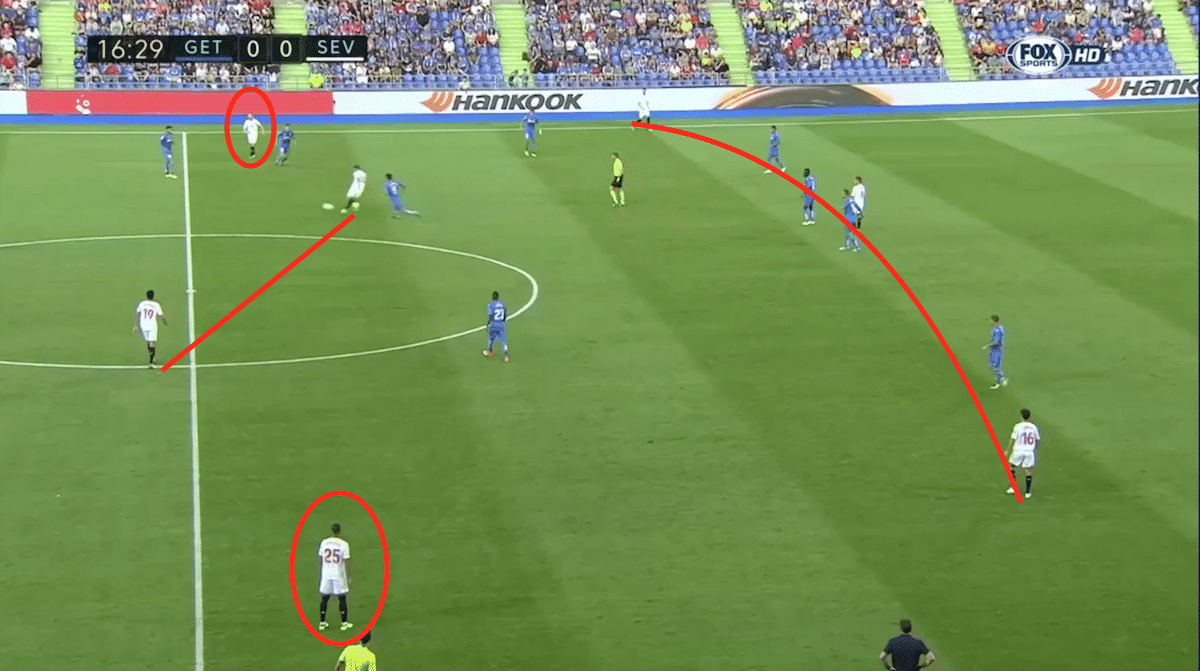 When Sevilla are in possession you often see a picture similar to the one above. The lack of a link player between midfield and attack isn't as much of an issue as it first seems because Yassin Ben Yedder, their striker, is similar to Roberto Firmino in the sense he drops deep to collect the ball, runs off the shoulder of the last defender, and pops up in the channels.

This staggered formation allows them to build from the back with plenty of passing options. However, they're still adapting to this and Simon Kjaer and Clément Lenglet have an error or two in them due to not being the most comfortable on the ball when pressed.

If the pressing triggers are set up right, Liverpool will be able to pick them off in an opportunistic way. Eibar lost 3-0 to Sevilla over the weekend but they had a lot of joy winning the ball back in Sevilla’s half and going on to create a chance.

If the same thing happens against Liverpool you would expect, with their quality going forward, that they would punish Berizzo's men.

The opposition also tend to exploit the fact their full-backs play as midfielders and push on whenever the opportunity presents itself. It's similar to the issues Liverpool face when Alberto Moreno is on the overlap, possession is turned over and the left-back is the offensive third while the Reds are defending.

It's just one of the risks when playing that sort of style. Liverpool have players who can do damage in this space. Not just Mané and Salah, but Moreno and Trent Alexander-Arnold if they're supporting the attack.

If Philippe Coutinho gets the nod then you can guarantee those areas behind the full-backs will have a bullseye on them and he'll be looking to thread passes through whenever possible to fully exploit that space.

Liverpool as a team aren't the most diligent defensively when it comes to protecting and covering their full-backs. They're often left exposed with a lot to do and if this happens against Sevilla, they could be punished by the away side.

As previously mentioned, Ben Yedder pops up all over the show and he's key in Sevilla flooding wide areas. 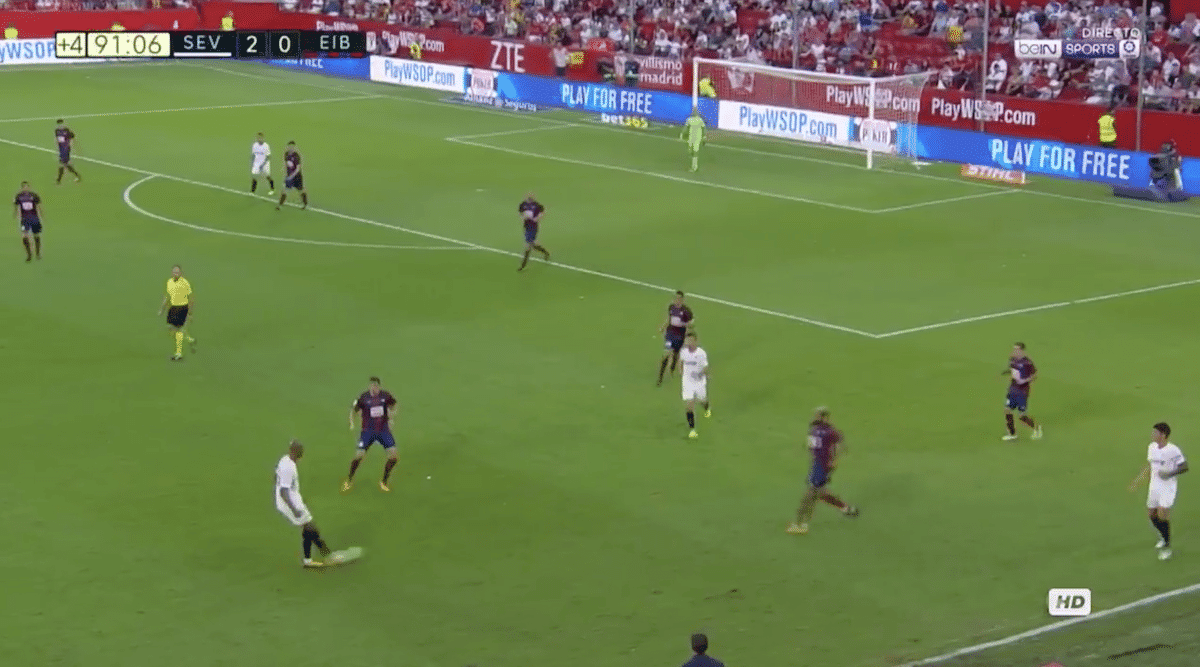 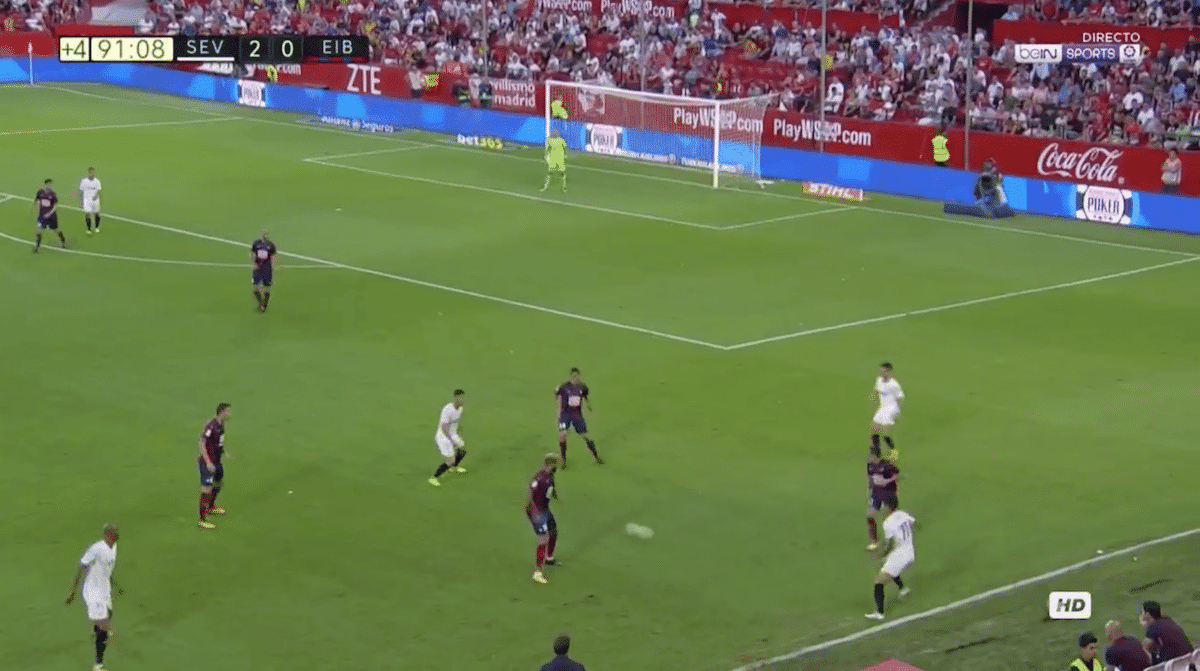 In the pictures above you see Ben Yedder drop deep and drag one of the defenders out of position. It creates a huge amount of space for Sevilla to attack and with a right-back and a right winger already in that area of the pitch it's easy for quick combination play to get them in behind and driving into the penalty area.

This phase of play ends with Nolito firing the ball home after the ball is played across the face of the six-yard area. 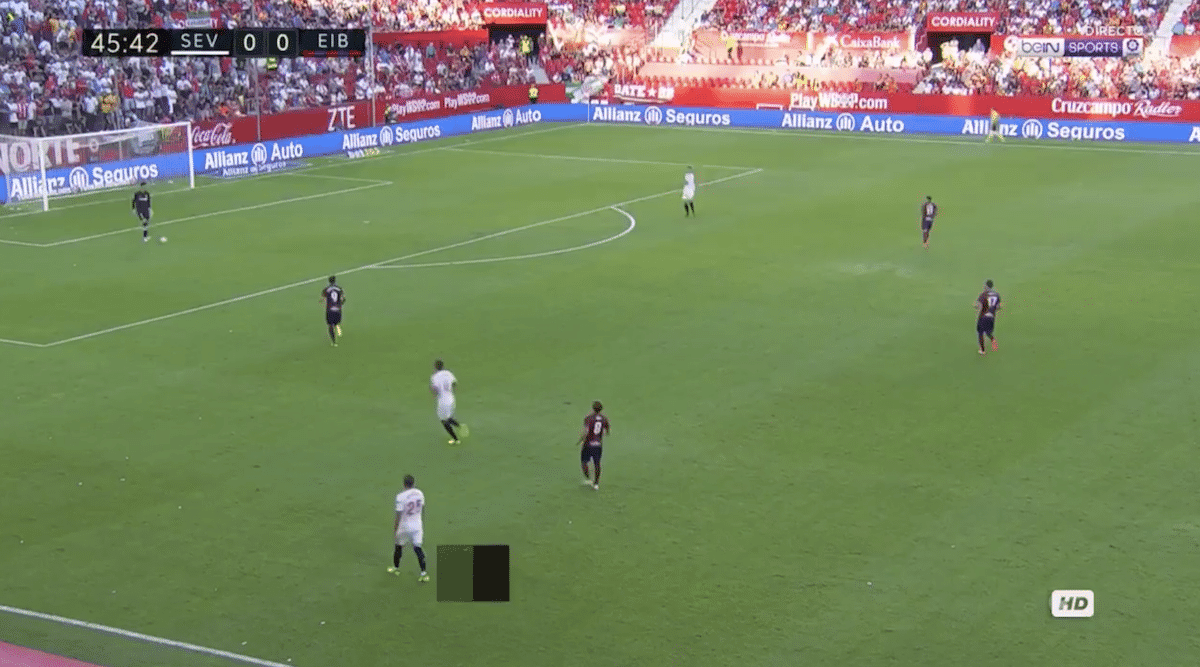 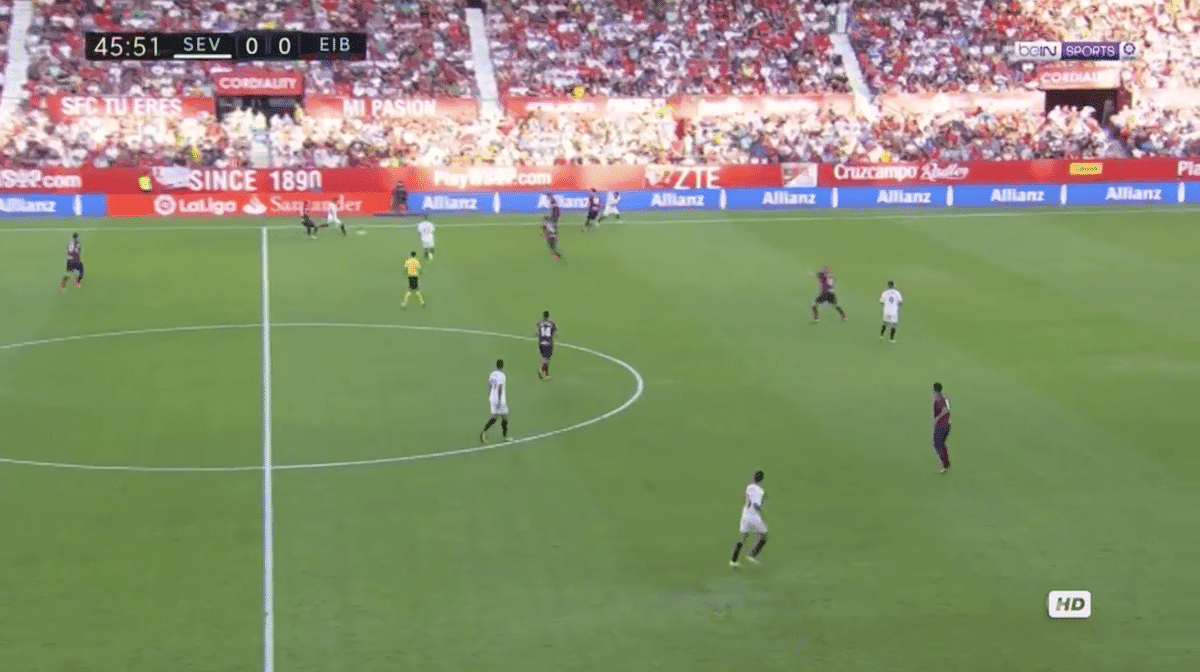 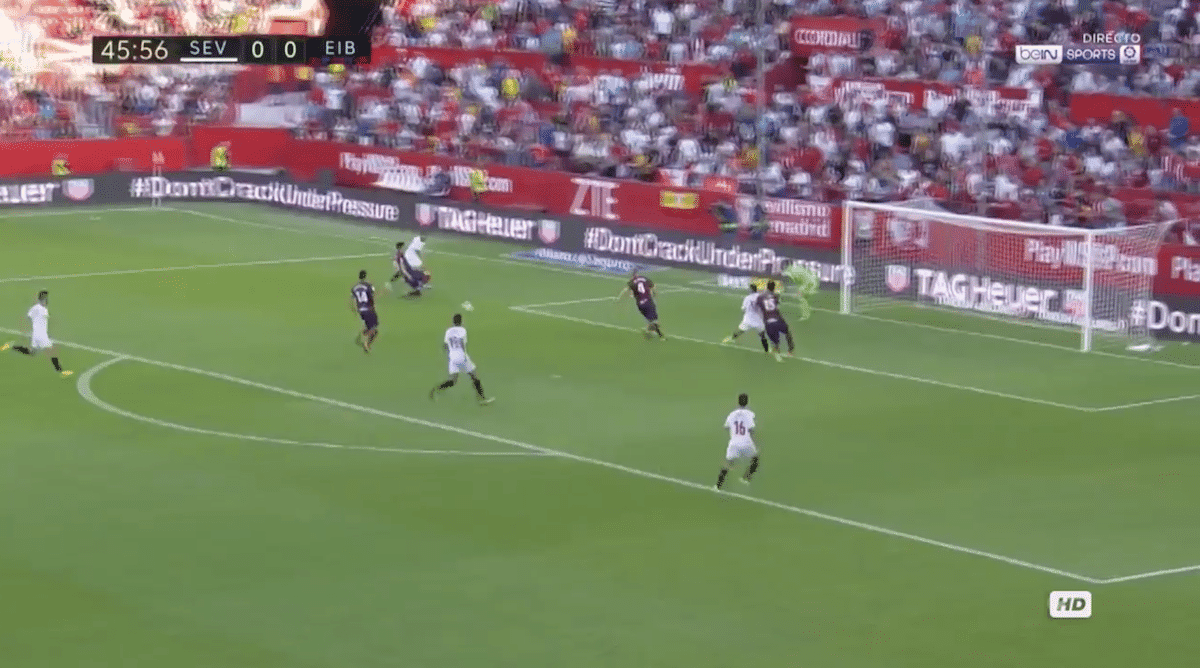 Something else Liverpool should be wary of is Sevilla's ability to go a little more direct. They aren't like other passing sides who won't play it long unless they have no other option to.

Due to how they shape up when playing out from the back they tend to have players in behind midfield pressers. So a lofted pass from the goalkeeper can find a midfielder in space unless the opposition have a second wave of players set up to press and in a position to do so.

In the series of pictures above you see the ‘keeper in possession and Eibar in a position to press if they attempt to play out. He opts to go long and finds the left-back who is in an advanced position, as shown in an earlier screenshot. The away side have squeezed up to press Sevilla and this leaves acres of space in behind to attack.

The ball is chipped over the top and Nolito is quick enough to get onto the end of it and composed enough to drive into the area and pick out a pass. The home side have bodies supporting the attack and Ganso fires home the opener.

The balance will have to be right. Stand off them enough to tempt them into playing out from the back, but have the key players in certain areas who are quick enough to press them into a mistake. It'll be up to Klopp to get this just right, and get Liverpool off to the best possible start in the competition.