Philippe Coutinho has been linked with a move away from Anfield for a number of summers now.

The 25-year-old has been touted as the potential heir to Andrés Iniesta and it's his employers, Barcelona, who have had a long-standing interest in the Brazilian maestro. But in recent transfer windows Ligue 1 giants Paris Saint-Germain have started to flirt with the Liverpool no.10.

They're primed to rekindle their courtship of Brazilian this summer with reports suggesting they have been in contact with the Reds over a potential deal.

Super agent Joorabchian has Coutinho on his books and Letang's involvement has seen enquiries made with the Reds ace about a move to the French capital.

Who Could Replace Philippe Coutinho… by FootballWhispers

Brazilian news outlet UOL revealed PSG new boy Neymar had asked Coutinho to ignore the advances of Barcelona and join him in the French capital.

L'Equipe claim Liverpool are prepared to listen to offers for Coutinho on two conditions – the French side pay £80million and they give those on Merseyside enough time to find a replacement.

However, Melissa Reddy of Goal.com contradicted the reports in France: “Coutinho is not for sale and has no desire to depart Anfield this summer with Barcelona already having to shelve their long-term drive for him.

“Liverpool have fielded no enquiries from Paris Saint-Germain over Philippe Coutinho and have reiterated none would be welcomed nor entertained over the Brazil international.”

The report goes on to suggest that Coutinho “is perhaps more unattainable than Mbappé – PSG's priority signing”.

And since those reports emerged the Reds have rejected two offers from the La Liga giants. A third, said to be worth in the region of £120million, could see Liverpool cave in.

A deal for Coutinho would by no means be easy.

The Brazilian signed a new contract to extend his stay at Anfield until 2022 whilst simultaneously making him the club's highest earner, pocketing in excess of £150,000-per-week. There's no release clause in the deal meaning Liverpool can't be bullied into a sale.

But should supporters really read into the club's public stance on Coutinho's availability?

Is anybody affiliated with the Reds likely to imply that they are open to selling their most prized asset? Any inclination of Liverpool even contemplating a sale would see their hand weaken and the price on his head decrease.

In the modern game every play has a price. There will always be a magic number that will make the owner of a club sit up and take notice. Fenway Sports Group, as shown in the past, are no different. 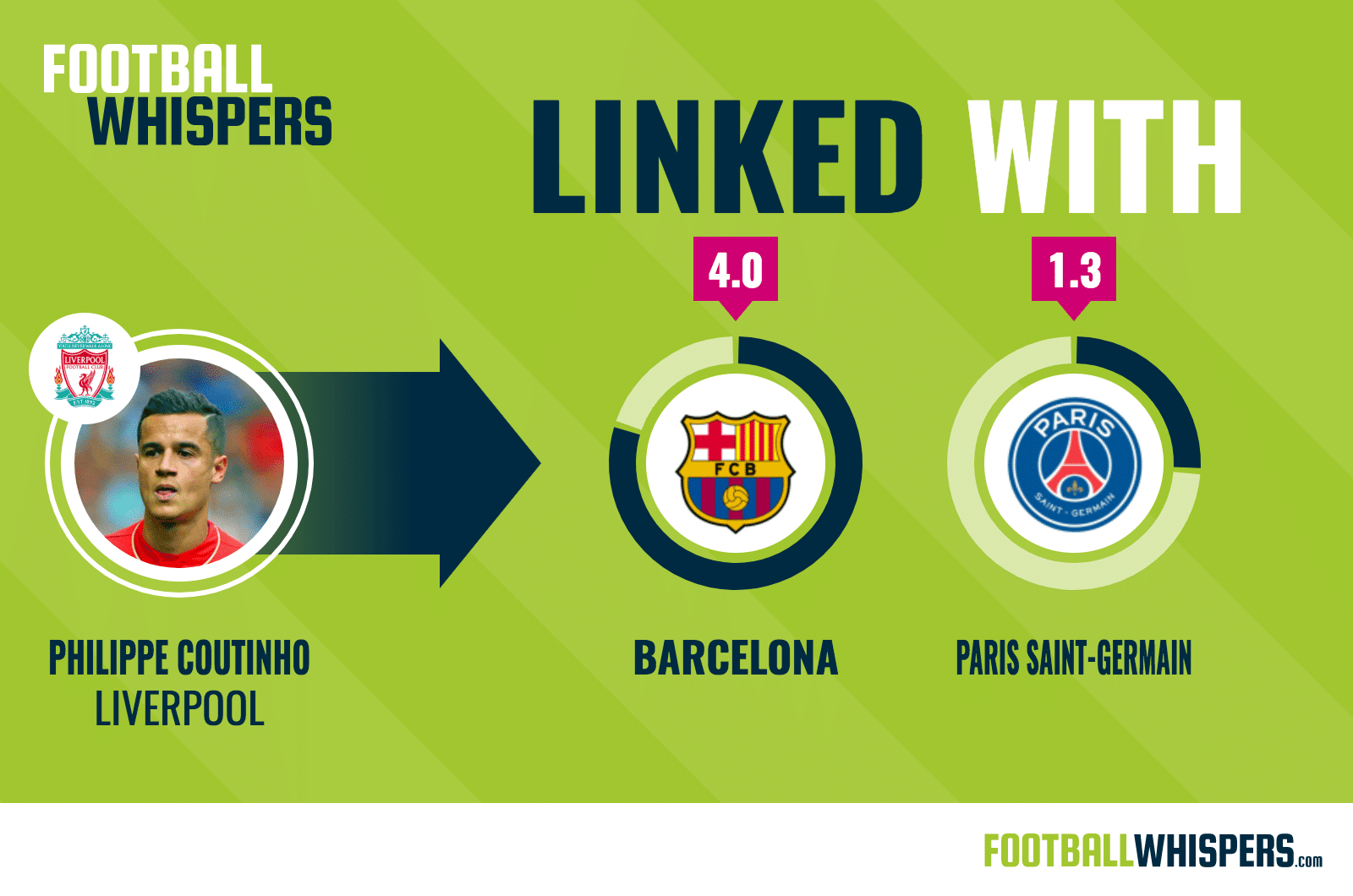 They may have held their ground with Fernando Torres, Luis Suárez and Raheem Sterling but the trio all eventually left the club.

The owners should be applauded for getting a combined £165million for players who wanted to leave – and the difference so far is Coutinho hasn't suggested he wants to part ways with the club  – but don't overlook the fact FSG still cashed in when an inviting offer was presented to them. And they agreed to put a release clause in Suárez's contract, let's not forget.

The Liverpool owners are first and foremost businessmen. If there's an offer on the table which would represent a potential tenfold increase in what they parted with to secure Coutinho, they're likely going to accept it.

The former Inter Milan player is no doubt a star for the club but inconsistency has plagued his time on Merseyside. The 25-year-old drifts between devastating and frustrating far too often for some fans and £80million for a player yet to have one standout full season would be too good to turn down.

Furthermore, there are question marks over his place in the starting XI next term. The addition of Mohamed Salah from AS Roma will likely mean he's not going to be deployed as a wide attacker, as he was last season.

The assumption is he'll be used in a more central role, similar to that he played in the final two matches of the Premier League campaign when he was at his magical best.

Klopp's decision to use him there, a role he played under Brendan Rodgers during the title challenge in 13/14, resulted in the Reds finishing the season in style with seven goals in two games. They had struggled to score frequently in the previous matches.

There's no guarantee Coutinho will be utilised there for long periods though. The German manager has been reluctant to deploy him centrally throughout his time at Anfield.

Maybe it was because Klopp had no viable alternatives in the wide role. Perhaps he felt Coutinho's presence was required in the final third as opposed to the middle third.

Or could it have been the former Borussia Dortmund boss just wasn't convinced he was physical enough to play in his midfield system regularly?

There's no clear answer but a handful of games in centre midfield in what's been the best part of two seasons doesn't mean Coutinho featuring there is a sure thing.

There could also be an assumption that Klopp will return to the 4-2-3-1 formation he was famed for in Germany and use the Brazilian playmaker as an attacking midfielder.

But with an abundance of midfielders at his disposal and the potential arrival of top target Naby Keïta, it would leave the Reds with the Guinean, Adam Lallana, Gini Wijnaldum, Emre Can, Marko Grujic, the returning Jordan Henderson and squad players Kevin Stewart and Lucas Leiva all vying for two spots.

Depth is good but there comes a point you have too many players and they quickly turn into unhappy ones. With the number of players Liverpool have in that position it's more than likely Klopp opts for a midfield three again next season.

So could Coutinho's departure be pivotal in the arrival of Keïta? The RB Leipzig man is a midfielder like no other. He's mastered the balance between attack and defence meaning he would be an instant upgrade on the many midfield units across Europe.

Not only can he play a number of positions for the club he can also play many different roles. Both Lallana and Wijnaldum's first-team places would be under threat if the 22-year-old arrived.

The Reds remain keen on the box-to-box midfielder despite the Bundesliga side reportedly slapping a £70million price-tag on his head. Is he worth such a fee?

Many people these days get hung up on transfer fees. If a club can afford the deal then the player is worth it. It’s that simple really. If his involvement in the first-team results in a number of title challenges and regular Champions League football then he's paid it back and then some.

For a club whose current transfer record stands at between £35-40million depending on who you believe, paying close to double that for a player is a big step. 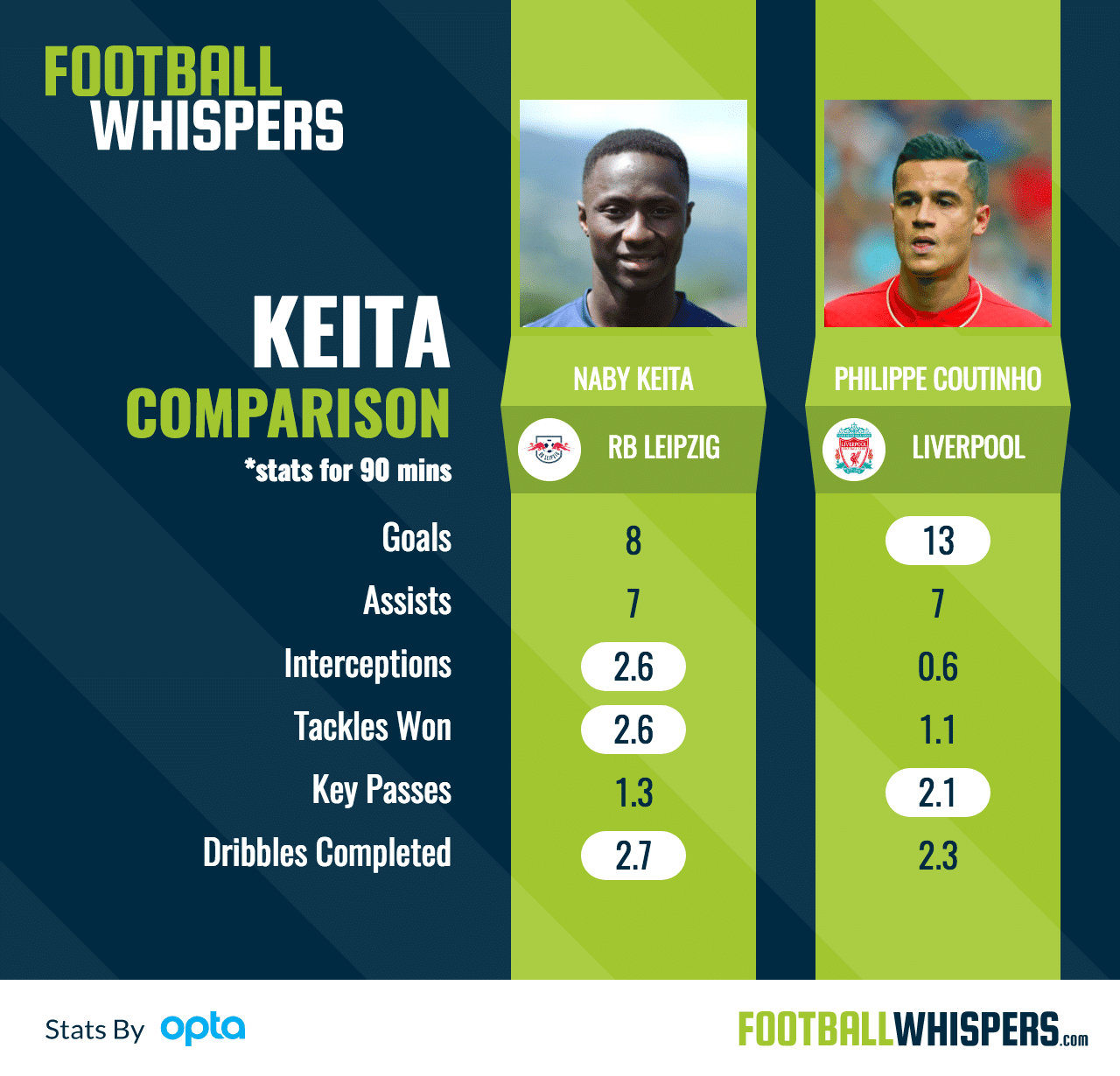 But could the Reds offset the expense of Keïta by parting with Coutinho?

The stats in the graphic above need context. Coutinho missed matches through injury and played the majority of the season in a forward role for a possession based side. Keïta was playing as part of a two-man midfield in a team looking to play on the counter wherever possible.

If Klopp did intend to use the Brazilian in midfield for the 2017/18 campaign then everything he offers – the incisive passes, the ability to beat a man and break the defensive lines and the goal threat – the RBL man can do, and then some.

On top of being able to replicate what Coutinho the centre-midfielder brings offensively, Keïta does the defensive side of things better than his Liverpool counterpart.

There is, of course, logic in balancing the books but a club with title aspirations shouldn't be selling off their star player, a good couple of years before his prime, to bring in upgrades.

Keïta should arrive but to supplement Coutinho, not in his place. As Liverpool fans know from previous experiences, it's never easy to replace an integral first-team player while looking to strengthen the squad in what's already a competitive league.