Despite the supposed gulf in quality between the Scottish Premiership and the English top flight, clubs north of the border have proved to be fertile breeding grounds for future Premier League talent.

From David Weir and Steven Naismith to Charlie Adam and James McCarthy, the path from Scotland’s top sides to English clubs is a well-trodden one.

Even this summer a whole host of transfers between sides in the two home nations have taken place, with Aidan Fitzpatrick’s move to Norwich City from Partick Thistle and Queens Park Rangers’ double swoop for Rangers’ Lee Wallace and Livington’s Liam Kelly perhaps the most notable.

The SPFL’s premium players continue to be linked with moves to England ahead of the transfer window closing in a week’s time – Kieran Tierney’s potential switch from Celtic to Arsenal has dominated the headlines throughout the summer.

But another full-back has emerged as one of the most sought after players in the final stages of the off-season. James Tavernier has reportedly caught the eye of Newcastle United, Aston Villa and Brighton, after an outstanding campaign for Rangers in 2018/19.

The 27-year-old recorded 17 goals and 17 assists for Steven Gerrard’s men in all competitions last season, helping his side to a first top-two finish in seven years. Such an output would be impressive for a striker or attacking midfielder but is a staggeringly good return for a right-back.

It is, therefore, no surprise a £10million transfer to a Premier League club has been mooted off the back of Tavernier’s best season to date. 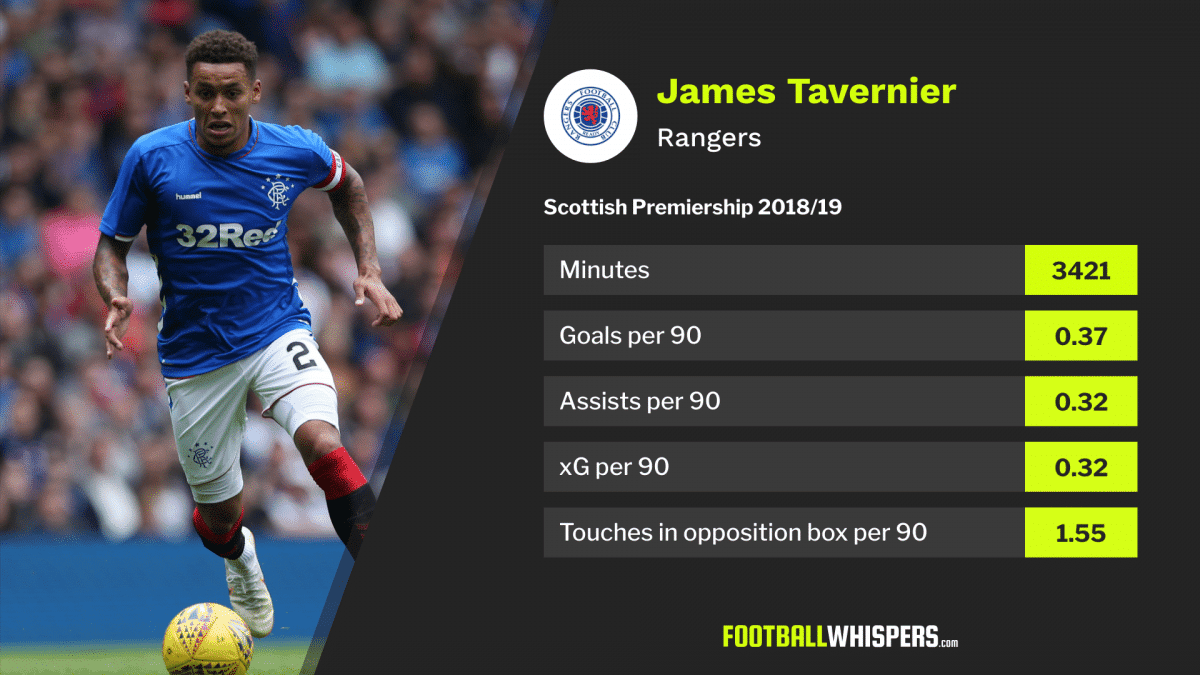 Despite the English-born defender improving on his attacking contributions in previous campaigns, 2018/19 was far from a fluke and the man from Bradford has been a thorn in the side of Scottish defences since arriving in Glasgow in 2015.

He burst onto the scene with 15 goals in all competitions during his debut season for the Gers, albeit in the Championship, and racked up eight goals and six assists in 2017/18.

They’re not just any old goals either. Tavernier has a record of scoring spectacular strikes, especially from dead ball situations, and won the 2015/16 SPFL Goal of the Season award for his sensational effort in Rangers’ 4-0 demolition of Peterhead.

So why is the former Newcastle player in such demand, besides his obvious goal record?

Despite being a late developer, Tavernier has hit the peak of his career at a time when offensive-minded full-backs are vital to the way that football is being played by so many teams in Europe’s top leagues.

Liverpool’s success last season demonstrated just how important it is to have defenders on both flanks who have pace, can dribble and can cross – three skills that the Rangers’ right-back possesses in abundance.

Former Queens Park and Dundee United star Andy Robertson filled one of those roles last season for Jürgen Klopp’s Reds, and teams are now clamouring to find the next bargain price star from Scotland who can be as successful in England as the Liverpool left-back.

This seems to have created the perfect storm for Tavernier, where the SPFL and his playing style are both in vogue, offering him a wonderful opportunity to return to the Premier League and have a second attempt at making it in one of the world’s best divisions.

The Scottish Championship and Scottish Challenge Cup winner will surely be itching to try his luck in England again, after his brother Marcus made his breakthrough into the Middlesbrough first-team setup last season.

It certainly feels like no less than the older Tavernier sibling deserves, having made such an impression during four years and 197 games in a Rangers shirt.

With an armoury of tricks and flicks, the finishing ability of a forward and a cool head when it comes to free kicks and penalties, Tavernier may just be the next attacking full-back to make a big impression on the Premier League in 2019/20.

Whether he ends up at former club Newcastle, Brighton, Aston Villa, or elsewhere, £10million could be an absolute bargain for one of the Scottish Premiership’s brightest stars.