Recently, rumours of James Rodríguez moving to Manchester United have gathered pace. Such speculation peaked last Saturday, when the potential transfer reached 3.8 on our index. And on Tuesday afternoon, Sky Sports stated that the Real Madrid star had been offered to the English side.

It has been suggested that Gareth Bale could make the exact same switch, though it is highly unlikely that the Spanish giants would sell two of their finest players to the same club, in the same window.

However, the Welsh attacker is reportedly open to a move to Chelsea, even if Manchester United are purported to be his preferred option.

With his place in the Real Madrid line-up under threat following Zinédine Zidane’s adoption of an altered midfield shape with Isco floating between the lines, a summer move to London could help him regain a regular starting berth. 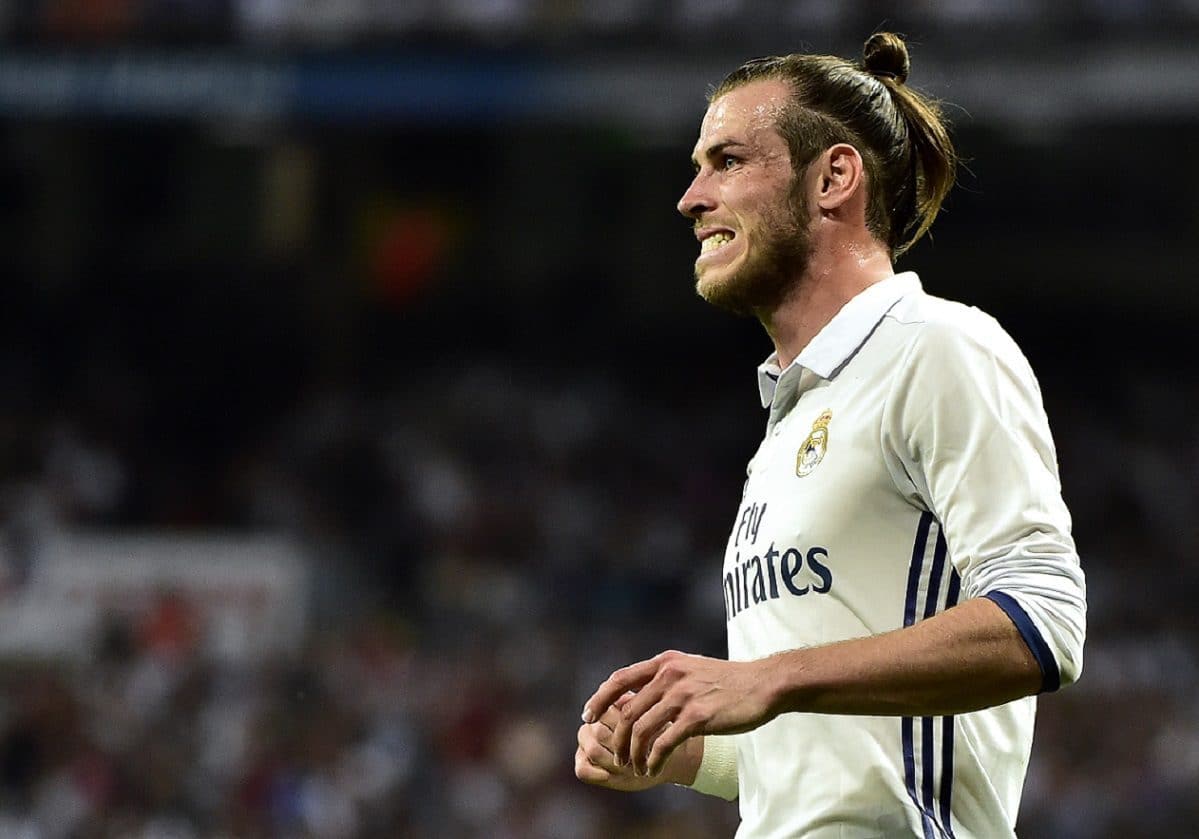 READ MORE: ISCO COULD FORCE BALE OUT OF REAL MADRID

The idea of Bale turning out at Stamford Bridge in the near future is one that would seem to dovetail well with the notion that Eden Hazard may be leaving for the Santiago Bernabéu.

The Belgian has been in phenomenal form throughout much of this season, scoring 15 goals and setting up five in Premier League action. However, he has been persistently linked with a move to Real Madrid.

If this rumour were to become reality, one of the inside-forward roles within Chelsea’s attacking set-up would be vacant.

Bale is a natural winger. He relishes hugging the touchline, using his pace and acceleration to break clear from one-on-one situations and attack from the outside in. However, Antonio Conte has eschewed the use of wingers in his debut Premier League campaign, opting instead for a 3-4-2-1 formation.

Within this shape, the width is generally provided by the wing-backs – Victor Moses on the right; Marcos Alonso on the left. Yet, while Bale first made his name as an attack-minded full-back with Southampton, undertaking such a functional role would not maximise his gifts.

Within Conte’s tactics, the inside-forward berths are perhaps the closest to Bale’s tendency.

Were he to assume the vacancy that could potentially appear if Hazard moves on, he would be required to fan out and take a deeper, wider position in the defensive phase, forming a midfield four in a temporary 5-4-1 shape.

Then, in the attacking phase, he would occupy one of the half-spaces, luring out opposition defenders and combining with his fellow attackers.

To perform the inside-forward role effectively, exceptional ball control and composure in tight spaces are necessities. Yet, in each of these aspects it could be argued that Bale isn’t quite as adept or productive as Hazard or Pedro. 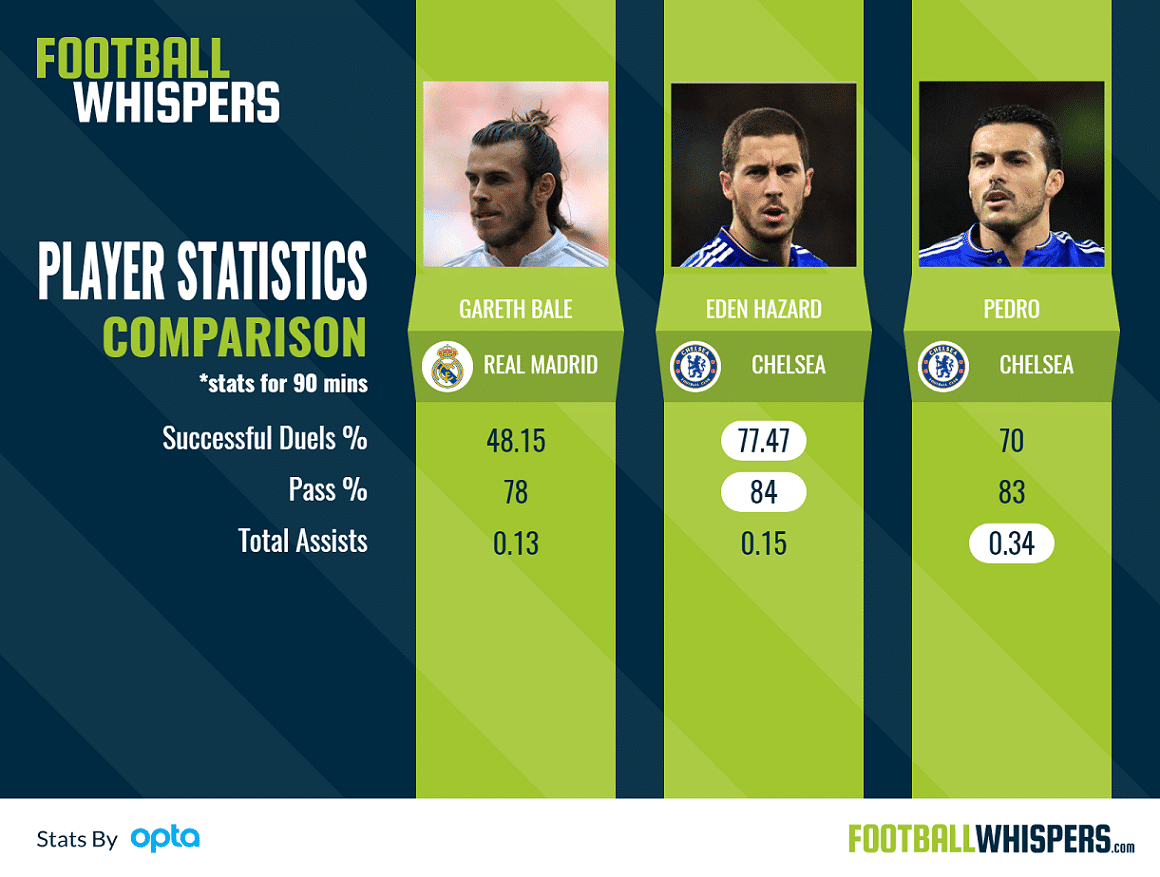 READ MORE: IS EDEN HAZARD AN UPGRADE ON GARETH BALE?

The 27-year-old might be better suited to a slightly more expansive role of greater freedom, in which his speed and skill could be utilised more frequently. All of this considered, the centre-forward berth could be his ideal starting place at Chelsea.

Initially, this may appear an even more drastic step away from his preferred wide role. But, upon closer inspection, Bale may have the right profile to succeed at centre-forward.

Diego Costa has thrived as a solo line-leader for Chelsea this season, with his aggressive running, directness and rugged strength causing problems for opposition defensive lines.

He has consistently dragged centre-backs out of position, created space for Hazard and Pedro, and progressed attacks single-handedly or through one-touch combinations with team-mates.

On the basis of the Spaniard’s displays this term, Conte ideally wants his centre-forward to possess good hold- and link-up abilities, as well as athleticism, physicality and a willingness to go it alone. Bale, while without the raw tenacity of Costa, ticks the key boxes.

In addition, the role would not be completely alien to the Welshman.

On occasion at international level, he has operated as a centre-forward within a rough 3-6-1 shape that is not entirely dissimilar to that used by Chelsea. Alternately, he has played in a freer, more central role than the one he has often fulfilled for Real Madrid.

Bale played as a centre-forward or a second striker for Wales last summer to great success, helping his country to the semi-finals of the 2016 European Championships in France.

With three goals to his name, he finished that tournament as the joint-second top scorer, three strikes behind the host nation’s Antoine Griezmann.

Playing in a similar position, within a similar system, at Chelsea would free him up from defensive duties and enable him to concentrate on leading the line, stretching opposition defences, making space for deeper team-mates and scoring goals.

The relationship between Costa and Conte has not always been a particularly positive one. Even now, long after the controversy that surrounded a potential January move to China, the striker is linked with Shangai Shenhua (the move has a rating of 2.0 on our index).

But, if this move were to take place, Bale could act as a sound successor atop the frontline.

Chelsea may well lose one or two of their most important players this summer, but the Welsh attacker is versatile and talented enough to potentially fill in more than one role within Conte’s 3-4-2-1 system.