Ross Barkley is staying at Everton until January at least.

The midfielder had been expected to depart Goodison Park after telling manager Ronald Koeman he wanted to leave.

He was believed to be at Chelsea having a medical on deadline day, when he pulled out of it, but the player himself denies that.

“Contrary to a number of reports in the press, I did not undertake a medical with any club at any point,” Barkley wrote on Twitter.

“I simply decided that due to my injury, it would be best to make a decision on my future and assess all my options in January when fully fit.”

That is at odds with what Everton’s majority shareholder Farhad Moshiri claims.

10 Best Deals Of The Transfer Window | FWTV by FootballWhispers

“Personal terms were agreed, but after the medical we heard from Paul Martin, Barkley’s agent, that he changed his mind.  “And he wanted to reconsider his position during the January window.

“That is the latest we have been advised.  “He is currently injured so technically he will be with us because he is under contract for another year.

“It is a big surprise but that is football.  “The No.10 position is very congested as we have [Gylfi] Sigurdsson, [Davy] Klaassen and [Wayne] Rooney.

“It is not easy to break into that now but he is a good player, he is a world-class player but he needs to play.”

Moshiri has a point with the No.10 role – there are already a number of options there at Everton, so although Barkley isn’t fit now, when he’s back from injury, does he have a chance of playing?

Barkley vs Everton No.10 options

We’ve had a look at the league statistics from last season for the quartet. 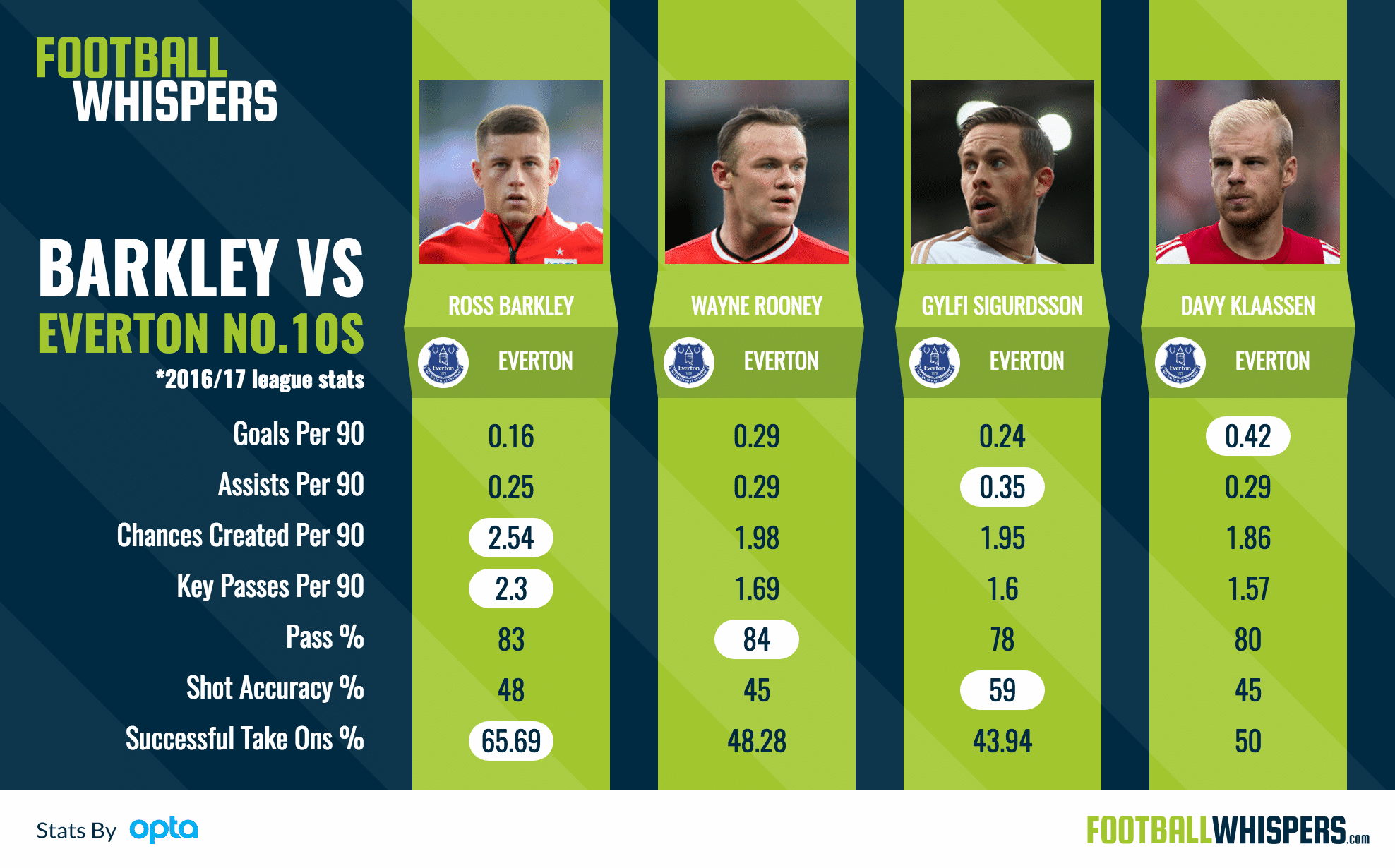 You have to take into mind that they were all at different teams than they currently are now though, apart from Barkley.

Sigurdsson was at Swansea, Rooney was at Manchester United and Klaassen was at Ajax, also in a different league.

In both cases, none of the other three made more than two per 90 minutes.

His passing accuracy was only one per cent behind Rooney too, who led the way with 84 per cent.

He did come bottom of the pile in terms of goals and assists per 90 minutes though, and was considerably behind Sigurdsson in terms of shot accuracy.

Whether or not he plays for Everton depends on his fitness, what Koeman wants from his team and whether Barkley wants a fresh start.

It feels like Everton have built for life without Barkley, but while he is still on their books, he isn’t a bad option to have.