Not the most exciting position in football, but thanks to the exploits of Dani Alves at Juventus, David Alaba at Bayern Munich and Real Madrid’s Marcelo, full-back is finally getting the respect it deserves.

In the Premier League, a good left- or right-back can be worth its weight in gold. As well as stopping the opposition, the modern full-back needs to be able to add to the attack, providing an extra option in the final third.

Liverpool and Chelsea struck gold, able to convert players into the role, and Tottenham Hotspur are basking in the glory of having two good options on both sides.

Manchester United, Manchester City and Arsenal will all be looking at potential signings in this area, with the Gunners especially linked with players for both sides of the pitch. The latest name to be mentioned is Lille right-back and long-time transfer target, Sébastien Corchia.

Who is Sébastien Corchia?

The 26-year-old is a former France Under-21 captain and since making his Ligue 1 debut for Le Mans in 2009, he has now played over 270 fixtures in the French leagues.

Unlike other transfer targets, like Monaco’s Djibril Sidibé, and current players Héctor Bellerín and Alex Oxlade-Chamberlain, the difference with Corchia is that he is a defence-first right-back. More than capable of pushing forward, throughout his career he has demonstrated a fantastic right-foot, even proficient from set-pieces, but he is first and foremost a defender.

Sidibé and Bellerín are superb going forward, but on more than one occasion, they have been caught out at the back, showing a lack of positional awareness at times.

After breaking through at Le Mans he made the jump to Sochaux in 2011 for under £2million. His proposed transfer to Lille originally backfired, with the club announcing it before the financial regulator had confirmed the green light. After being paraded holding the No.2 shirt by the northern club, he had to return to Les Lionceaux for the rest of the 2013/14 campaign.

Although he has played over 200 times at right-back, moving further forward is not outwith his remit, playing at right-midfield around 40 times and still finding a way to add goals and assists.

Bellerín is a target for Barcelona and City, and should he decide to move on from the Emirates, Arsenal’s need for an all-round full-back would go to the top of the list. Especially with Carl Jenkinson and Mathieu Debuchy also heavily linked with moves away from North London.

Contracted until 2018, this is the perfect summer for both Lille and interested clubs to do business, and the player himself has admitted that he could be persuaded to try his hand outside of his homeland.

“I won’t mention any names, but yes, I have heard about interest from English clubs, but to be honest I don’t know what will happen,” he told Goal.com. “The Premier League is, of course, an interesting league at a great level but so is Spain, Italy and Germany, like our own Ligue 1.

“A lot of French players have done well in England, and coming from the very physical Ligue 1, I think maybe it is not so difficult for French players to adapt to the style of the Premier League”

The last 24 months have been fairly turbulent for Les Dogues, but Corchia has still managed to come out with his head held high and his reputation continuing to grow.

Locked in a relegation struggle for several months, Lille have now made it up to mid-table and the future is looking a lot brighter. Legendary Argentine coach Marcelo Bielsa will take over in the summer and with money to spend, life at the Stade Lille Metropole is looking a much healthier prospect. 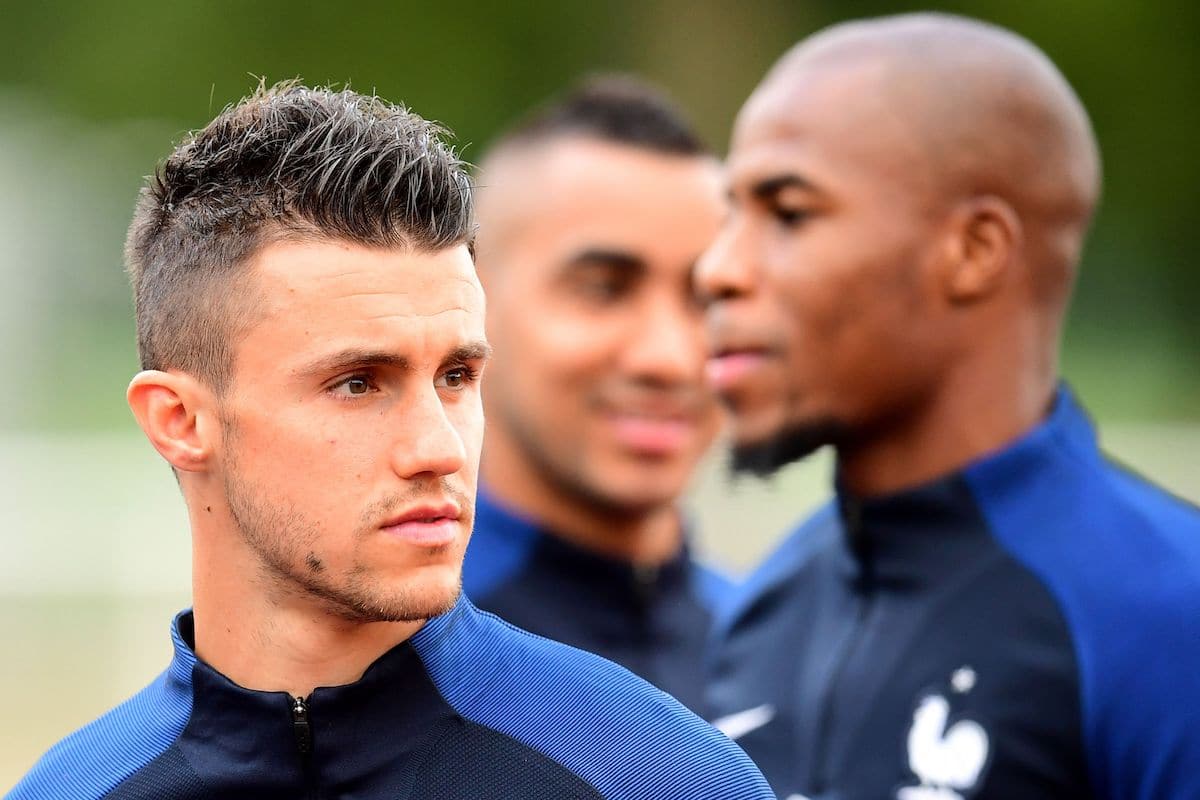 One thing that has alluded Corchia so far is a regular place in the full France team — his one cap coming in a friendly against the Ivory Coast — and it looks like regular Champions League football may be the only way he will achieve that.

“As this stage of my career, I really would like to be playing regularly in the European competitions. That is a fantastic challenge for all players to play the that level, and I believe, that it would improve my odds in the tough competitions for a starting place for France, which is my hope and ambition.”

That doesn’t mean that a departure from Lille is guaranteed, but Bielsa will need time to build the squad.

“I have one year left on my contract, and there are negotiations with Lille, but I don’t know how they will end,” he confessed to Goal. “Maybe the club want to sell me now.”

“I have never stated that I definitely want to leave the club, and the project of ‘the new Lille’ with a new owner and Marcelo Bielsa as the coach from this summer sounds very interesting indeed. So in my opinion everything is possible. Nothing is decided yet.”

In the past, Corchia was a £5million target for Paris Saint-Germain, but with added experience and the likes of Benjamin Mendy and Sidibé being sold for over £10million, Lille will be holding out for an eight-figure sum.

Would he upgrade the Arsenal defence? 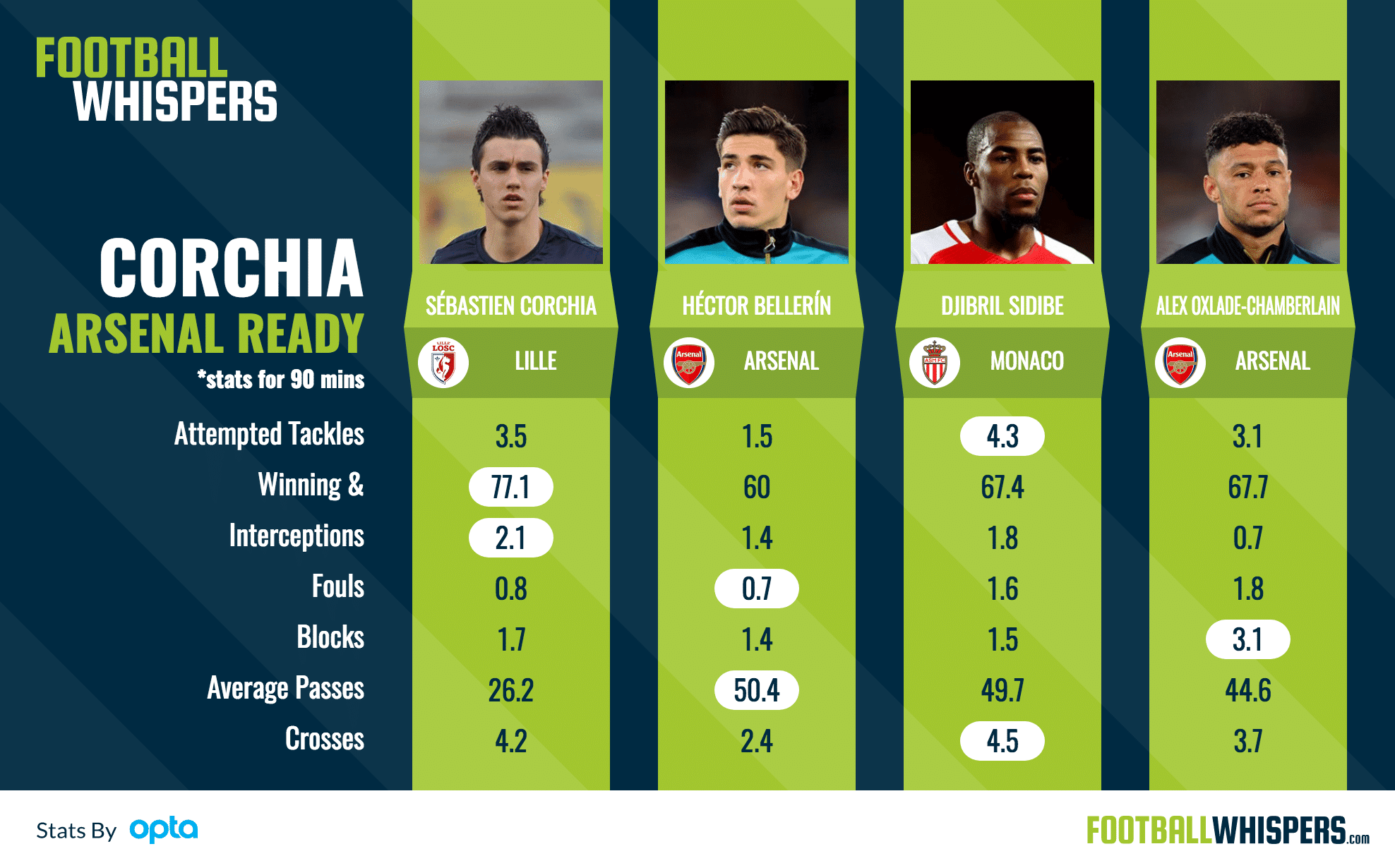 Although he’s not had the best campaign, it’s a surprise to see that Corchia makes more than double the amount of tackles as Bellerín, plus the Frenchman wins around 10 per cent more than the other players measured.

His positioning is quite often excellent, especially in a team where the width comes from the flanks and the full-backs are allowed to bomb forward. That’s where Sidibé caught the eye last season and he can’t match Corchia’s 2.1 interceptions.

The Spanish right-back just pips him in terms of conceding fewer fouls, but not by much. They are both more controlled than the Monaco man and Oxlade-Chamberlain in this area.

Lille have been poor this season, averaging just over one goal per game – 37 in 36 fixtures – so their chances at attacking have been limited, so it says so much about Corchia’s quality in the final third that he attempts 4.2 crosses per 90 compared to Bellerín at 2.4 when he makes around 50 per cent fewer passes.

When he gets wide, Corchia is looking for the early ball, hoping to spot the run of the striker and getting a cross into the danger area. Too often, Arsenal are guilty of dwelling on the ball — not the Lille right-back, when he sees an opportunity, he takes it.

This season, he has one goal and four assists. He’s created as many goals as Sidibé, without the free-flowing, league-leading attack to open up space for him.

Monaco have scored 61 more goals than Lille this season, someone who is almost camped in the opposition half should have contributed more in the way of chances for his team-mates.

“I know the stats, and I like them. I am a defender and I enjoy the physical part of football – and I go into every challenge to win it,” he continued in the interview. “I like the stats about winning my duels with the opponents, because that is an important part of being a defender.”

Not since Lee Dixon – maybe Oleg Luzhny – have Arsenal had a secure, defensive first full-back. Lauren, Emmanuel Eboué and Bacary Sagna were all better going forward. Corchia, in his ninth season as a first-team member, gives you the best of both worlds, but always makes sure his section of the pitch is covered first, before looking to get forward.

Linked with a move to the Emirates before he joined Lille, Corchia is now a more experienced, high-level full-back who is ready for the next step, Arsenal could provide him that chance and he would give them the kind of protection on the right that they’ve not had for over 10 years.