There's an old saying that familiarity breeds contempt. It's similar to the concept the grass is sometimes greener. Ultimately we all have the urge to try something new and exciting, something that stimulates us in a different way.

And that's perhaps why Gary Cahill was on the end of some harsh criticism from Chelsea supporters earlier this season. He is the old-hand in the Chelsea defence, the man supporters know all about. Mr Familiar.

Meanwhile, Antonio Rüdiger was signed in the summer from Roma while Andreas Christensen returned from a two-year loan spell in Germany with Borussia Monchengladbach. They were, in essence, shiny new toys for Antonio Conte to play with.

So when Chelsea started the season poorly, fans understandably became frustrated. They vented and directed their anger at the man who'd been there through the good and the bad; Cahill.

Did supporters have justification? Certainly, the England international was undoubtedly struggling for form but he was hardly alone. David Luiz was all over the place defensively in many games but was escaping the criticism Cahill received.

Yet Conte continued to play the now 31-year-old and he has slowly regained confidence. He performed well in the win over Manchester United and was impressive in the demolition of West Bromwich Albion.

And yet when Chelsea make the trip to Anfield this weekend to face Liverpool, Conte would be wise to drop Cahill to the substitutes' bench.

It wouldn't be any kind of punishment, just a simple decision based on what is best for the team, something which Conte has repeatedly stated is his only motivation when selecting players.

Cahill is the defender you want against West Brom and Manchester United, who have physical strikers who will fight for every ball and look to bully defenders. He is not, however, the man to take on Liverpool's quick and nimble attacking quartet.

When it all clicks the Reds are one of the most fearsome sides in Europe. They push forward with pace and guile, even the most organised of backlines would struggle to contain them.

It's why Chelsea will need to be at their best at Anfield, and why Rüdiger should be deployed on the left side of the Blues' back three instead of Cahill. The German isn't necessarily a better defender than the Chelsea skipper, but he is a better athlete.

And given Mohamed Salah should occupy the right flank for Liverpool, Rüdiger's pace and is likely to be vital for Chelsea. The Egyptian winger has come a long way since leaving Stamford Bridge, initially on loan, in February 2015.

José Mourinho felt Salah wasn't ready to shine in the Premier League, and perhaps he had a point. The 25-year-old was inconsistent during his time with the Blues, often making the wrong decision when in possession. Now he is decisive with the ball and is a match winner.

He makes far more intelligent runs, too. Perhaps that is down to the greater attacking licence Jürgen Klopp gives his players, but Salah now knows when is the right time to break behind a defence and when to drop short.

As the below taken from Liverpool's win with Burnley shows, when Liverpool's defenders have unchallenged possession, Salah is a threat.

He runs off Burnley centre-back Ben Mee, who has performed excellently this season but isn't the quickest defender, and expertly takes down the long ball forward.

Without a moment's hesitation he fires a shot past Burnley goalkeeper Nick Pope to get the Reds level.

It is that exact run that could harm Chelsea with Cahill on the left of the back three.

If Salah gets away from the England centre-back he doesn't have the recovery pace to rectify the situation. And given the Blues are not a team to press high, Liverpool's defenders are likely to have time to try to pick out the winger.

There is certainly an argument to be made that Cahill is positionally a better defender that Rüdiger as the German centre-back can be caught ball watching at times.

But he is likely to know the runs Salah makes better than any other defender in the Premier League, simply because he spent two seasons with the Liverpool star at Roma.

So if Salah dips in behind the Chelsea defence, then Rüdiger can follow. As the below still, taken from the Blues' defeat to Manchester City shows, the Chelsea No.2 has a turn of pace that can be vital. 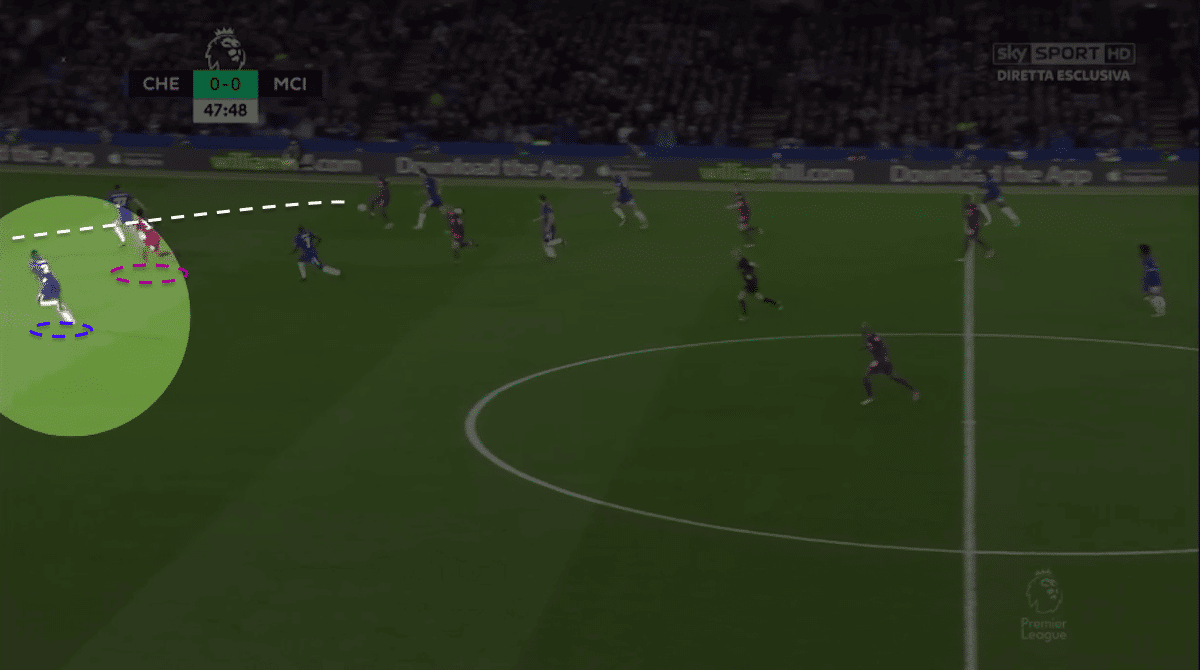 The ball is slipped behind Christensen for Gabriel Jesus. The Brazilian striker is quick and is undoubtedly favourite to collect the through ball and get a shot in on goal.

Instead, Rüdiger, this time playing on the right of the back three, demonstrates his acceleration to get back and make a clearance before the City striker can even collect the pass.

It's the type of scenario that could easily be played out at Anfield on Saturday. 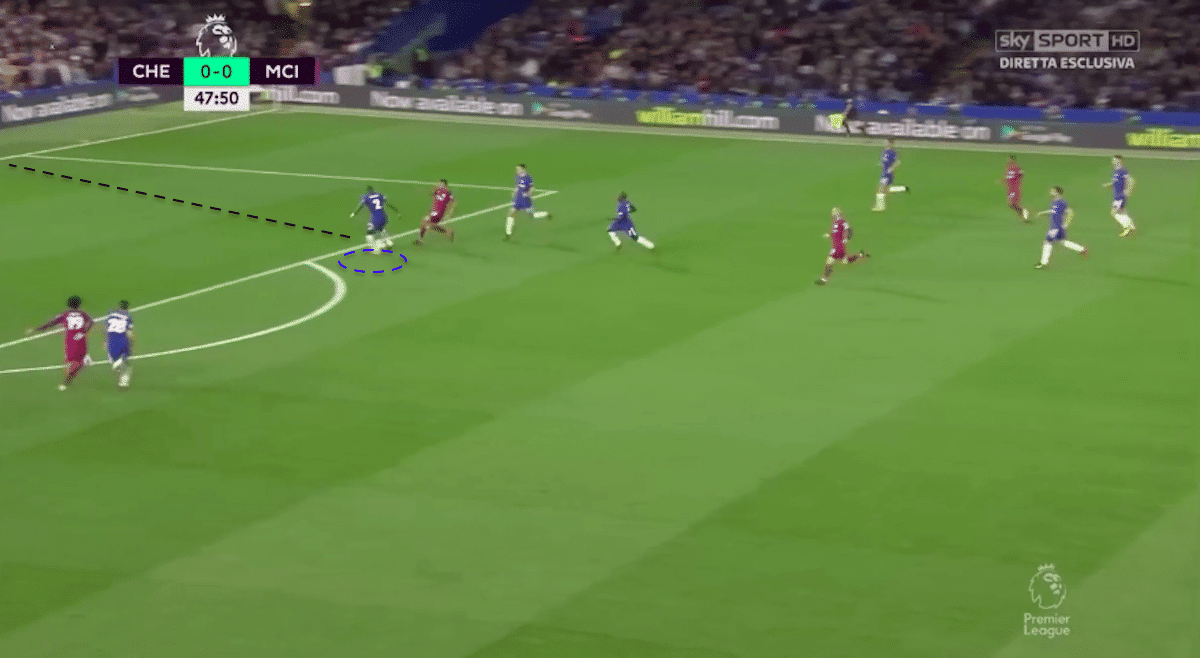 The statistics suggest, too, that Rüdiger and not Cahill is the man to help shackle Salah, who is the Premier League's top scorer this season having found the net nine times.

Interestingly, Rüdiger also has a far greater pass completion percentage than Cahill (88.5 to 84.6) which should help the Blues when trying to combat the intense Liverpool press.

Conte is a loyal man, however, and he may feel Cahill deserves the chance to again prove himself against one of the Premier League's most threatening attacks.

But he is also a man who says he always does what is best for his side, and leaving Cahill on the bench at Anfield may just be that.