“Concentration comes out of a combination of confidence and hunger,” the immortal words of golfing legend Arnold Palmer. On Tuesday night, Arsenal had neither the confidence to go to Goodison Park and beat Everton, and they certainly didn’t have the hunger to get the job done.

The second part is the most surprising. Arsene Wenger’s side are in one of the most exciting title battles in recent years. Locking horns with Chelsea, Liverpool, Manchester City and at a push Tottenham Hotspur. Yet, they went to Merseyside and looked as flat as Ronald Koeman’s garden back in Holland.

Mesut Ozil, poor throughout the night, had a good chance on the 54th minute when he flashed a shot over the bar, but until the last few minutes when Alex Iwobi was unlucky to see his shot superbly blocked off the line and a penalty shout on Alexis Sanchez, they were dreadfully poor in the final third.

Even the opening goal needed a deflection off Ashley Williams to beat Maarten Stekelenburg. The 34-year-old Dutchman didn’t make one save during the entire game. Everton bossed the match once they went behind, out-gunning the away side with 14 shots to Arsenal’s nine.

“Their weakness is if you go face-to-face with them, be aggressive, win your battles and run,” Koeman told the Official Everton website after the game. “Of course, you need a little bit of luck as well, and we had that [with two blocks off the line] in the last 20 seconds. But we deserved the win because we came back with great character.”

Arsenal’s attack was poor, there’s no getting round that, but usually in these situations, you look to the defence to pull you out of a hole. Keep a clean sheet, hold off for a draw, or protect their 1-0 lead. However, there was a massive failing across the board on Tuesday night.

It’s not about tactics, systems, it comes down to concentration. We are now getting into the busiest period in English football, the games come thick and fast, training sessions will be at a minimum, you need to be switched on at all times. If you are not, there is enough quality around the league to punish you.

Everton’s equaliser is a perfect example of the majority of Wenger’s team switching off just before half-time. From the first graphic below, you can see that Leighton Baines (yellow) has been left in acres of space, which initially is fine, you want your wide players tucking in. 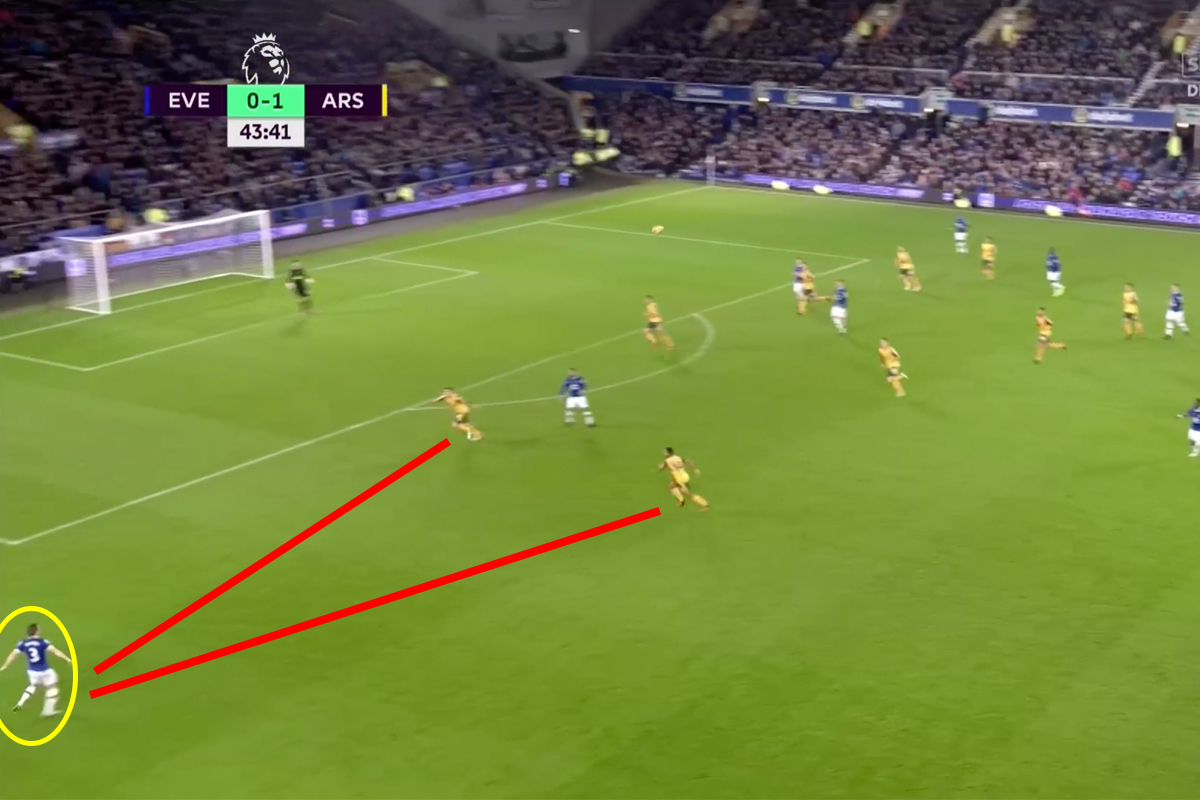 Theo Walcott (red), is caught a little on his heels, he tries to close the gap too quickly. Not a natural defender, he steams in all guns blazing and all too easily, Baines steps inside on to his right foot.

It looks like the defence has things under control, the back four are in a good position, ready for the cross, however, their initial positions may have been good, but no one actually takes any responsibility to pick up the danger. 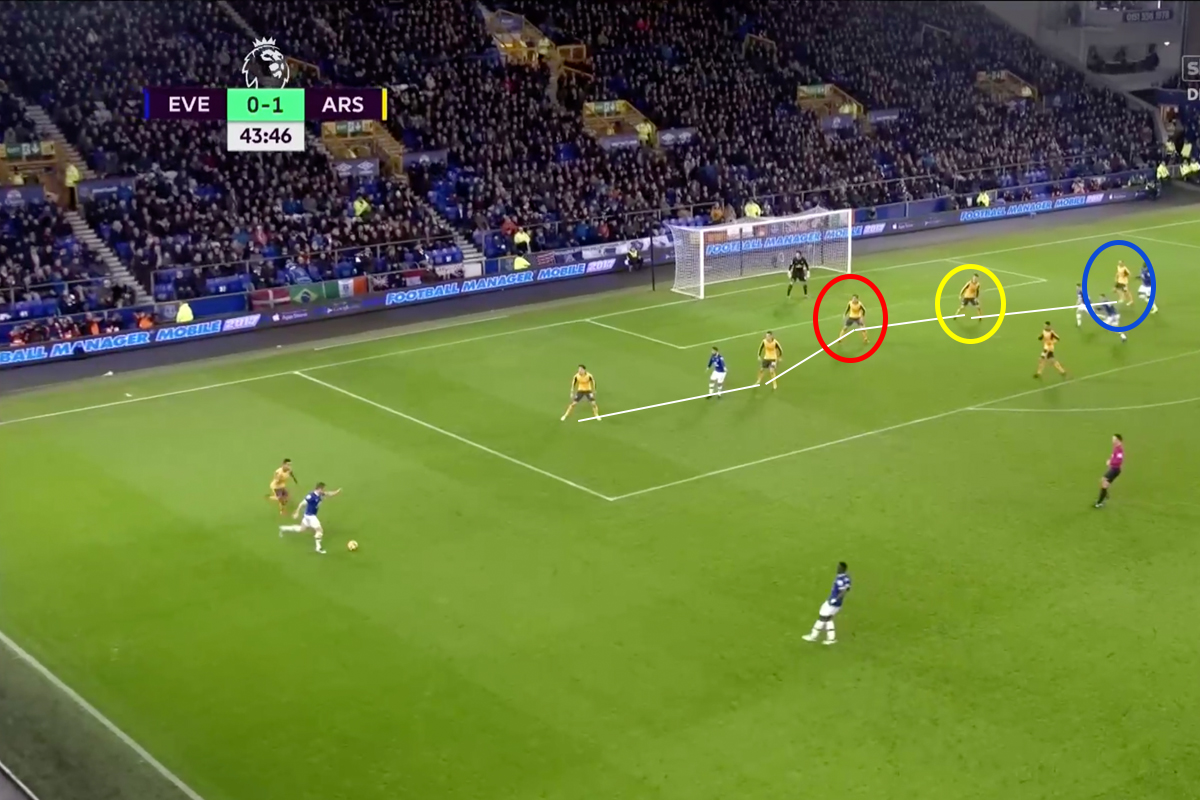 Nacho Monreal (blue) is marking Romelu Lukaku, but Gabriel (red), standing in for Shkodran Mustafi, does absolutely nothing. He doesn’t even turn his head around to see who's coming into the box. He is motionless. Laurent Koscielny (yellow) is left marking two attackers, he opts to pick up the run of James McCarthy and Seamus Coleman is left unmarked to score.

“I don’t think it is Gabriel’s fault on the corners,” Wenger told the Official Arsenal website when asked if they missed Mustafi. “Not on the first goal, the responsibility is somewhere else.”

The coach is never going to sell out his player, especially as he has to rely on him during the German’s absence. He can’t fully put the blame on the Brazilian either, due to the failings of a number of his team-mates, but there is definitely some blame to fall at his door.

Francis Coquelin, like Gabriel, is caught in no man’s land. He’s not marking anyone, he doesn’t look around him to assess the situation. He’s already thinking about half-time.

Things didn’t improve for the winning goal either. With no one on the posts, there should have been more than enough defenders to make sure every Everton player was picked up. Yet, Arsenal are zonal marking and there’s a complete mis-match in the penalty area. 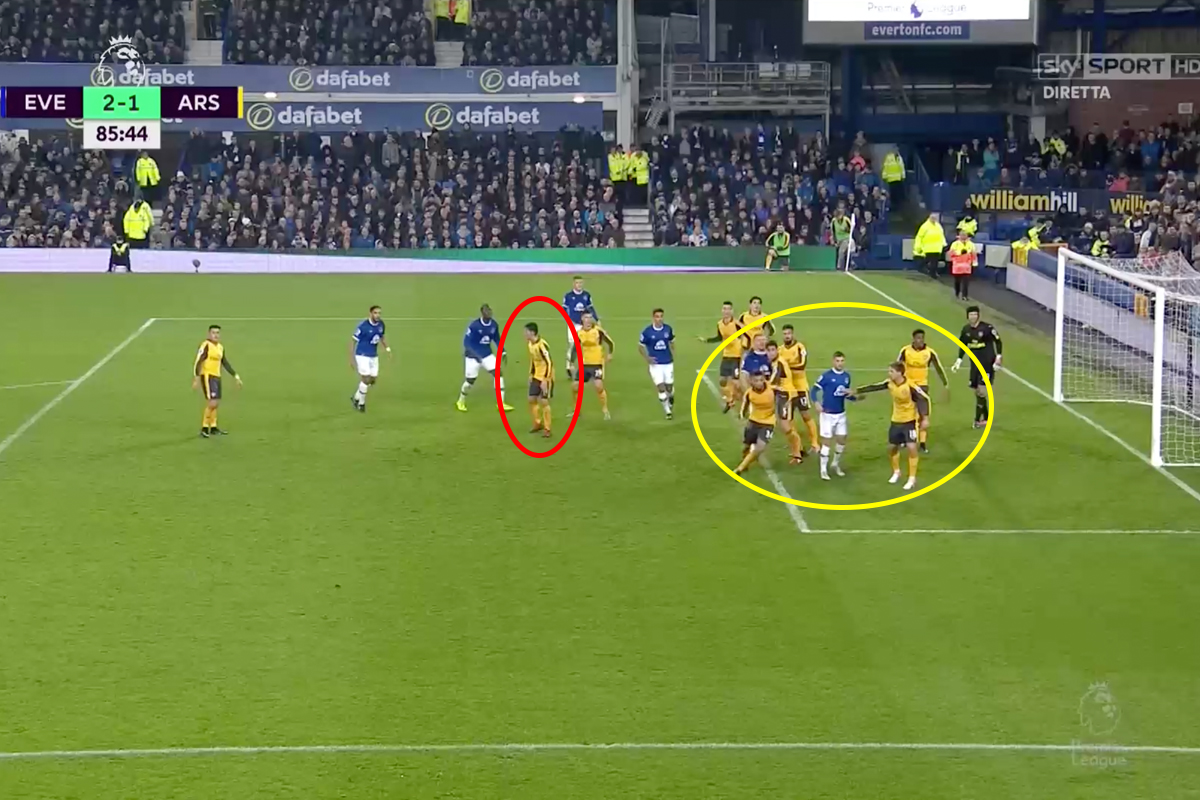 The two Everton players nearest the six-yard box are being monitored by five players. Ozil (red) is left watching Williams and any one of three attackers were left with the chance to get a run on the defence once Ross Barkley’s ball was played in.

You can argue all day about whether it should have been a corner or not, but if you defend it properly and clear the danger, there is no talking point. Williams is allowed to run on goal unchallenged, no one is there to put a block in, delay his approach. He is given a clear path towards the ball.

Ozil shouldn’t have been left there against the centre-back, however, when you watch the replays, as soon as the ball is played, the German international's head is looking up the pitch and he’s already walking away. That’s criminal at any level, never mind the Premier League.

“I think we have to live with the wrong decision and it doesn’t explain why we do not head the ball after you know,” Wenger continued. “But I am really disappointed because Clattenburg was in a really good position to see that they headed the ball on and it’s not the first time we are unlucky with this decision this season. Overall, I do not want to speak about the referee too much, it’s not my problem.”

Wenger has to look at his own defensive system first, as he said, if they defend the play well, it becomes a moot point. Clattenburg didn’t cost Arsenal the game, the Arsenal players did that all by themselves.

You are allowed a bad day at the office, football is such an organic game that sometimes things just don’t work out in the final third. Another day it will click better. However, what you do need is concentration, confidence and hunger. The Gunners lacked all three on Tuesday and it cost them points.

Things are only going to get tougher before the end of the year as the games begin to pile up. Concentration is the one area that Arsenal need to improve on if they are to stay in the title hunt.