The Saturday lunchtime game in the Premier League this weekend is an important one.

While Crystal Palace are all but safe – a 5-0 annihilation of Leicester City on Saturday effectively sealed their survival – Stoke City remain very much in the throes of the relegation dogfight.

Simply, it's a must-win game for Paul Lambert's Potters, a team who haven't won since January.

But, three points adrift of safety, it's a critical match in Stoke's bid for survival. Come Saturday afternoon at the bet365 Stadium, Lambert will be relying on the home fans giving the players a lift.

Zaha and Shaqiri the MVPs

He will also be relying on Xherdan Shaqiri, Stoke's pint-sized dynamo who is both the club's top-scorer and assists leader, with seven and six respectively.

In the away dugout, Roy Hodgson will bestow similarly heavy expectations on Wilfried Zaha as Palace aim to stretch their unbeaten sequence to five games.

Palace's strong finish to the campaign is thanks in no small part to Zaha. During the aforementioned unbeaten streak, Zaha has scored four goals and notched an assist. He has eight goals and three assists in total this term.

The 25-year-old is brimming with confidence and, having starred in the five-goal thumping of the Foxes, he will look to continue his purple patch by putting Stoke to the sword.

Zaha and Shaqiri are vastly different players. Whereas Zaha is renowned for his searing pace and trickery, Shaqiri is an unpredictable curator of spectacular moments, be it improbable Euro 2016 bicycle kicks or impeccably judged half-volleyed dinks over goalkeepers.

They're a couple of streaky, exciting footballers that possess temperaments which allow them to both sprinkle moments of magic over dull matches or go missing. For Stoke and Palace fans, it can be exhilarating and baffling in equal measure.

But they possess the creativity and guile around which the attacking style of their team is shaped. The Swiss ‘power cube,' as he's been called, is a more astute passer of the ball with 79 and 59 per cent accuracy in passing and long balls respectively compared to Zaha's 74 and 50 per cent. Zaha is also dispossessed more often than Shaqiri, 3.83 times per 90 to 1.66.

Marko Arnautović's departure, coupled with the signings of Eric Maxim Choupo-Moting and Jesé not working out as planned, increased the pressure on Shaqiri as Stoke's main source of inspiration.

They have had an awful season, but he has fulfilled his role, leading the team in chances created, assists, goals, shots and xG assisted. 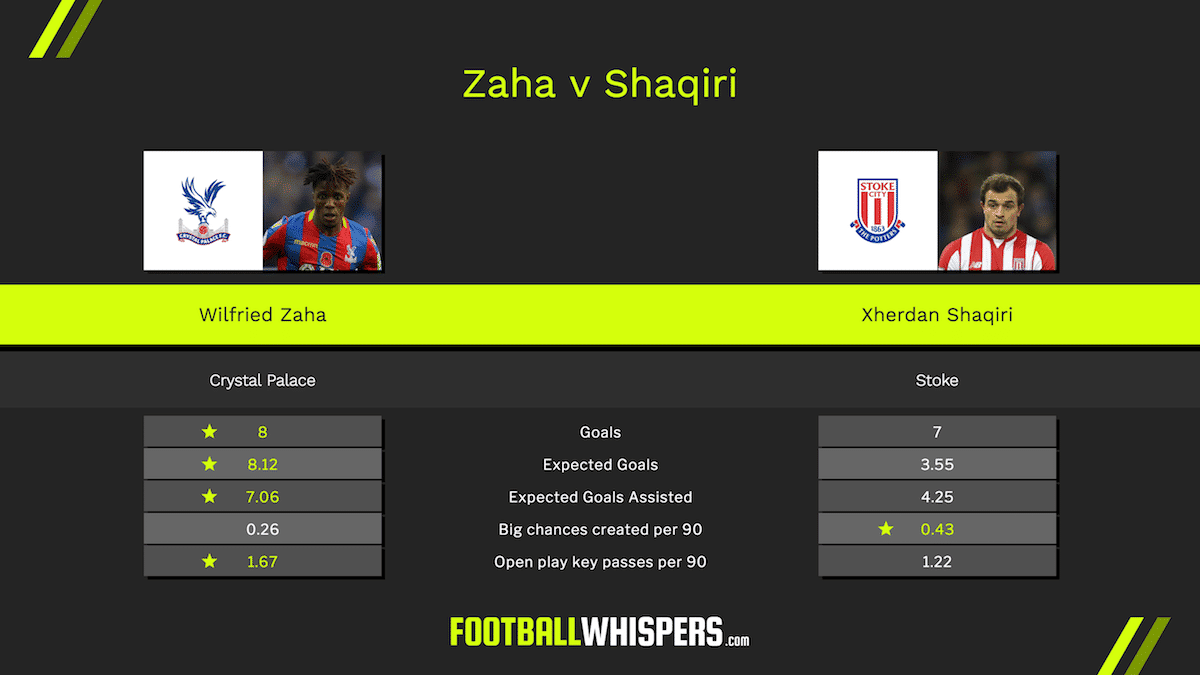 But Zaha has been similarly influential for Palace in the final third. Shaqiri may be a more cultured user of the ball, but Zaha's all guns blazing wizardry of the wing has been equally effective.

The former Manchester United winger averages 4.21 successful take-ons per 90, crushing Shaqiri's 1.09. He also has 7.28 touches in the opposition's penalty area per 90 to the Stoke playmaker's 1.63.

When it comes to expected goals, Zaha is the clear frontrunner. The Ivorian's xG is 8.12 compared to Shaqiri's 3.55, while he comfortably surpasses the former Bayern Munich star's xA and expected goal contribution (xG + xA).

As Stoke prepare to host Palace on Saturday, it's clear Shaqiri and Zaha are their side's standout performers. Of course, with Zaha and his team-mates playing with a certain freedom and swagger, it will be interesting to see how Shaqiri handles the pressure given the potential repercussions of a Stoke defeat.