Chelsea want a new left wing-back this summer, that much is clear.

It looked like Juventus’ Alex Sandro was their No.1 option, with a world-record fee for a defender being mooted.

If the Blues fail to land any of these options, they may end up looking elsewhere for a cheaper alternative.

And Antonio Conte’s side.

Who is Telles? A background

Now 24, he made professional debut in January 2011 at local club Juventude, before making a move to a bigger Brazilian side – Grêmio – in December 2012.

It was at Grêmio where he attracted admirers from Europe’s big leagues, but work permit issues limited his choices and he ended up moving to Galatasaray in January 2014, after playing 39 times and scoring once for the Porto Alegre-based side.

His move to the Turkish club cost €6million and he signed a deal to keep him there until 2018.

The interest from other sides in Europe continued and he was subject of Chelsea transfer rumours back in the summer of 2015, with various reports claiming the Blues were looking to replace Filipe Luis with him, but instead they plumped for Abdul Baba Rahman, whose career at Stamford Bridge never really took off.

Instead, after 60 appearances and two goals for Galatasaray, he left for Inter Milan on a one-year loan with the option to make it permanent in August 2015, a move saw him working once again with Roberto Mancini, who had previously coached him at the Turkish side.

The Italian boss left Inter the following summer, and so did Telles, after 22 appearances.

He didn’t return to Turkey though, and was sold to Porto for €6.5million on a contract that ran until 2021.

The full-back is definitely in the Brazilian mould and likes to go forward, perhaps making him ideal for a wing-back role.

He is arguably better going forwards than he is defending, and possesses great pace and flair – he provided 10 assists for Porto last season.

A longing for Chelsea

There is no doubt that Telles would want a move to Chelsea, even if he’s only been at Porto for one season.

“For now, we have nothing,” he told Sport Witness.

“Not from Chelsea. Neither me nor the player received any contact, from any English club. But it can happen.

“When he went to Galatasaray, we had an offer from Chelsea for Alex.

“But at the time, we had already confirmed a pre-contract with Galatasaray, and we could not go back.

“But there was information exchange, last year too.

“And I believe that maybe one day he will play for Chelsea.

“I don’t know if it’s going to be this season or the next but I feel like one day he can play for Chelsea.” 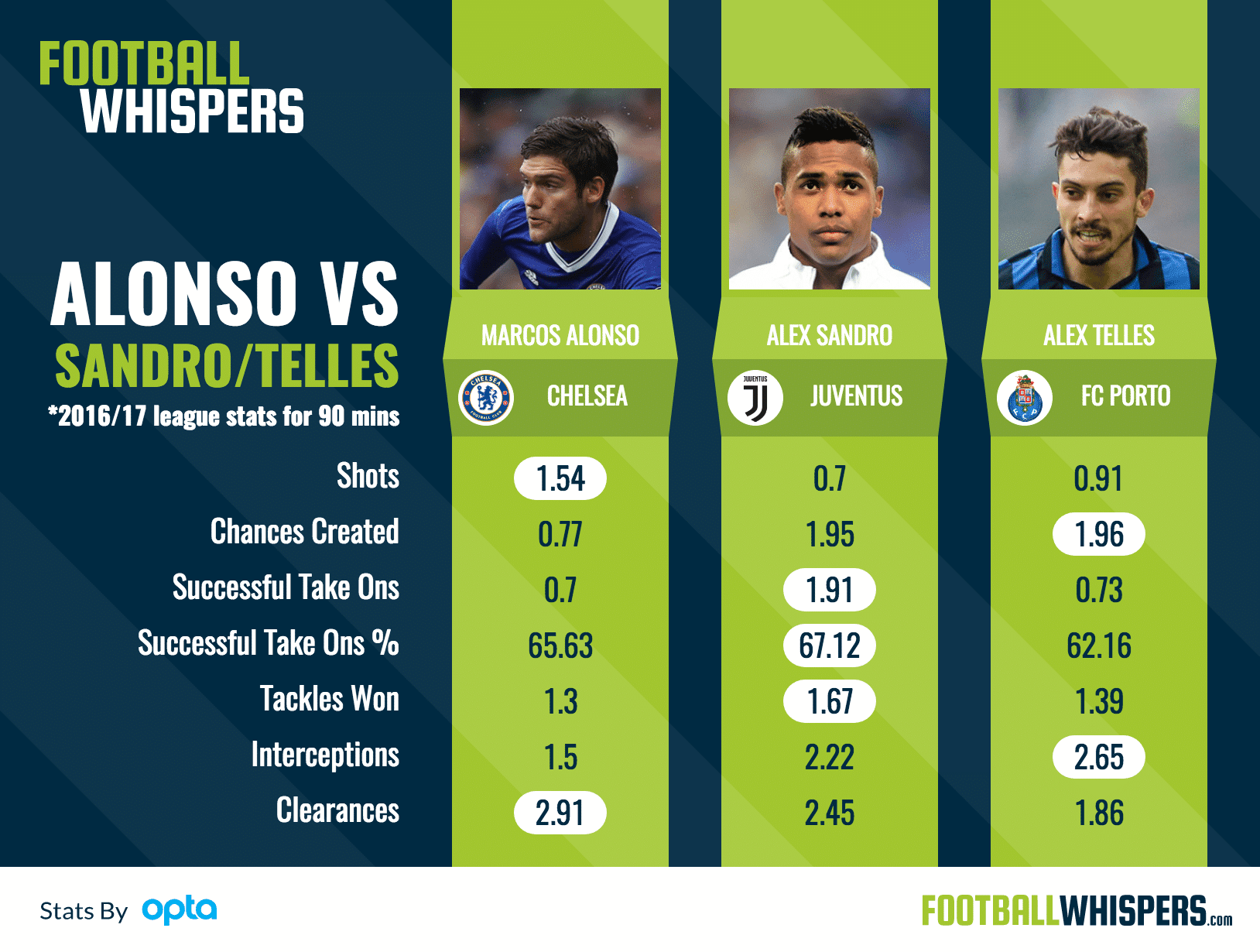 But if Chelsea do sign Telles, how does he compare to Sandro, or even current first-choice left wing-back Marcos Alonso?

We’ve taken a look at their statistics from the 2016/17 league season – of course they have all played in completely different leagues, with Alonso playing in the Premier League, Sandro in Serie A and Telles in Portugal’s Primeira Liga.

It perhaps is no surprise that Telles picked up 10 assists for Porto last season, considering per 90 minutes, he averages 1.96 chances created.

That is pretty much the same as Sandro (1.95), but they both completely outdo Chelsea’s Alonso, who trails them considerably with just 0.77.

In terms of take ons, it is Juventus’ Sandro who is the man you’d want in your team.

Alonso averages completion in 65.63 per cent of his take ons, while Telles is at 62.16, so there was not too much difference between them last season.

Defensively, they all make the most in different categories.

The Porto left-back is much more likely to make an interception, averaging 2.65, with Sandro on 2.22 and Alonso on 1.5.

What’s more, the Spaniard’s height – 1.88 metres – was a key factor for the Blues last season, with the goal he scored against Arsenal being proof of that.

Telles and Sandro are both 1.81 metres tall, which does perhaps give Alonso the advantage in terms of aerial battles.

But last season’s statistics do show show that Sandro is quite possibly a step above the other two, and showing why he would command such a high fee, with the likes of £60million being mooted in the press.

Telles has a release clause of €40million (£35million), but that is still a lot of money for a Plan B.

If Sandro were to arrive, he would undoubtedly be the first choice at left wing-back, whereas there is no guarantee Telles would displace Alonso, especially given how good the former Fiorentina man has been at the start of this season.