It was no secret that Newcastle United were chasing a striker throughout January. Nicolai Jørgensen looked like he’d be the man to come in, with the Magpies heavily linked with the Dane throughout the end of the transfer window.

Indeed, it was only his current club Feyenoord that stopped a deal going through according to his agent Mikkel Nissen.

“I can confirm that Newcastle specifically wanted to have him and did a lot to make it successful,” Nissen told Danish newspaper Ekstra Bladet.

“There were also other Premier League clubs in play but Newcastle was the most daring. But Feyenoord were against it.”

With the move for the £20million-rated 27-year-old off, they turned to Leicester City striker Islam Slimani, who was also a West Ham United transfer target on deadline day.

Despite the 29-year-old Algerian joining the Foxes for a club-record £29million in August 2016, he has started just two Premier League games for them this season and needed to move on.

“Slimani is a player with Premier League experience,” said Newcastle boss Rafael Benítez after his arrival.

“He is a player who can fight with defenders, challenge and score goals. Hopefully he can give us some experience and some different characteristics to the strikers we have at the moment.”

Indeed, his sizeable frame and ability to operate as a target man are traits Benítez didn’t have in Dwight Gayle while Joselu, who is the other option at St James’ Park, has that frame but isn’t good enough.

They duo have struggled in the Premier League this season, netting just seven goals between them.

They did have someone else in that profile in Aleksandar Mitrović, but Benítez clearly didn’t fancy him or, more precisely, his temperament and allowed him to leave for Fulham on loan.

Before Joselu arrived in the summer, Benítez made it clear he wanted a forward as he was not convinced by either Gayle or Mitrović after winning the Championship title.

“If you see the squad, it’s obvious that we need a striker. We needed to bring some players in some positions to have competition,” he said.

“Dwight was doing really well last year. But it’s another level and we have to see if he can replicate something similar in the Premier League. We need competition in each position.

“Not just because they will be better, but we need bodies. You have to be sure that you have enough quality to keep the level.”

Yet he knew money was tight. “It’s very simple. If you’re asking me which players you want, I can tell you four or five players in the top sides,” he added.

“We cannot sign these players. Trying to be realistic, sometimes you go to the market and you have a target.”

That’s why Joselu arrived for just £5million – £10million less than Middlesbrough paid for Britt Assombalonga in the Championship.

It’s no surprise that he’s hardly set the world alight when they paid so little. That’s why Slimani has come in. But how does he compare to Gayle and Joselu? 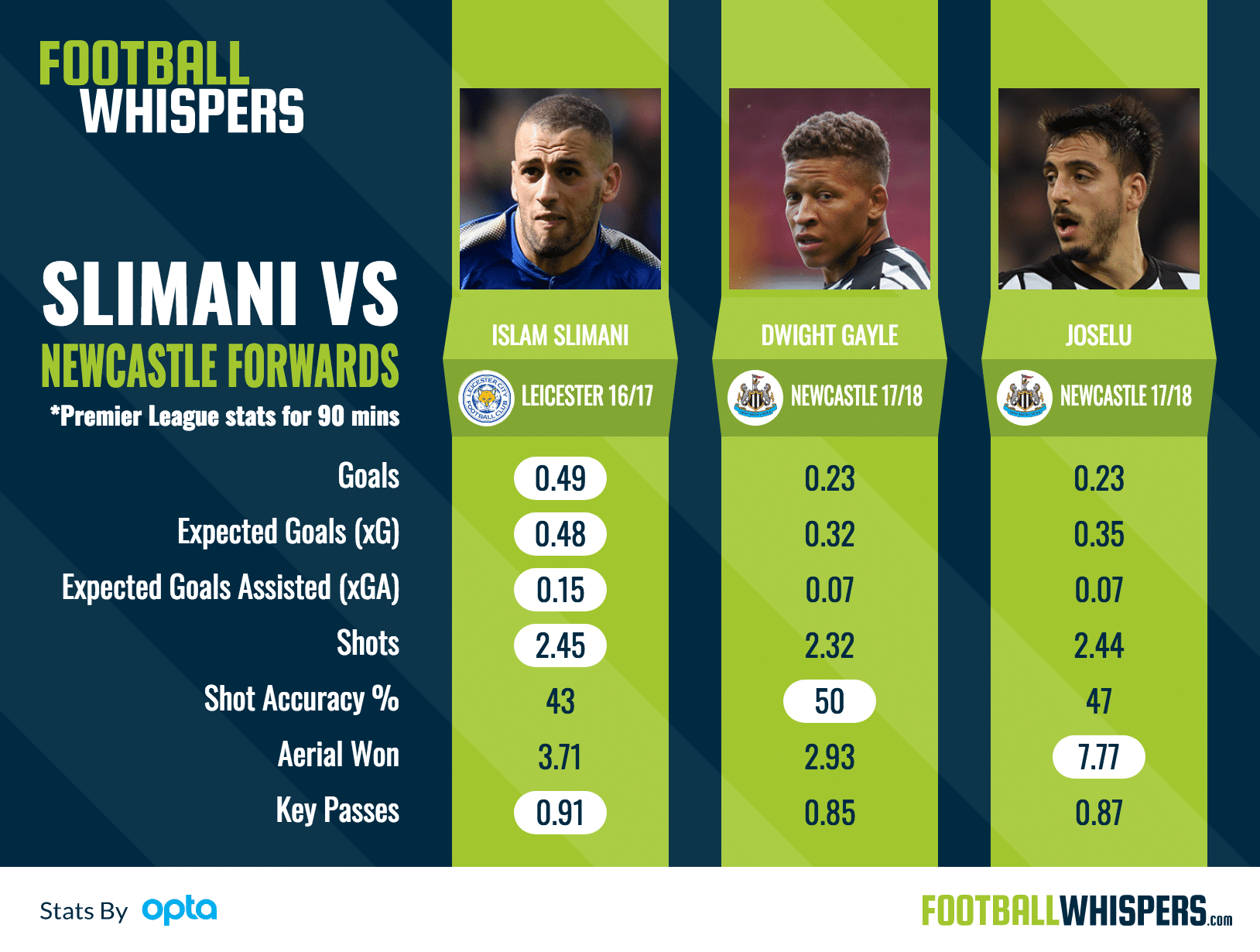 In the graphic above, we’ve compared him to the duo using his stats from 2016/17 due as his lack of games this season don't make for a relevant or fair comparison.

Those numbers suggest he gets into areas to score and creates more chances for others than the other two, and that's crucial when the Magpies are struggling in front of goal.

The one measure where Joselu gets the better of Slimani is in the air, though, with the Algerian winning considerably fewer aerial duels than the Spaniard. But his goal threat more than makes up for that.

The big worry for Newcastle fans will be whether he can get fit and ready after just 241 minutes of Premier League action this season.

But his record of 0.49 goals per game last season is double that of the Newcastle duo's this term. If he can replicate that form and get match fit, the Algerian can be the man to fire the Magpies to Premier League safety.