The Gunners, once again, appear extremely unlikely to attain a top-four finish in the Premier League, while the fallen Milanese giants were tipped to regain their Serie A standing this term after record summer investment, but a turbulent campaign sees them seventh currently.

The major difference between the two sides at present, however, is that Milan are trending upwards under new coach Gennaro Gattuso, while Arsenal are stuck in a rut.

In order to progress to the last 16 and hold out hope of qualifying for next season's Champions League via Europe's secondary club competition, Arsène Wenger must galvanise his best players in the way Gattuso has managed to do since taking charge at the San Siro in late-November. That means helping Mesut Özil thrive.

The Milan fixture will pit Özil against Hakan Çalhanoğlu, a player likened to the Arsenal man as he rose to prominence in Germany before signing for the Rossoneri last summer.

The balance of the tie could well swing in the direction of the side whose German-born playmaker is able to make the biggest impact in the final third. 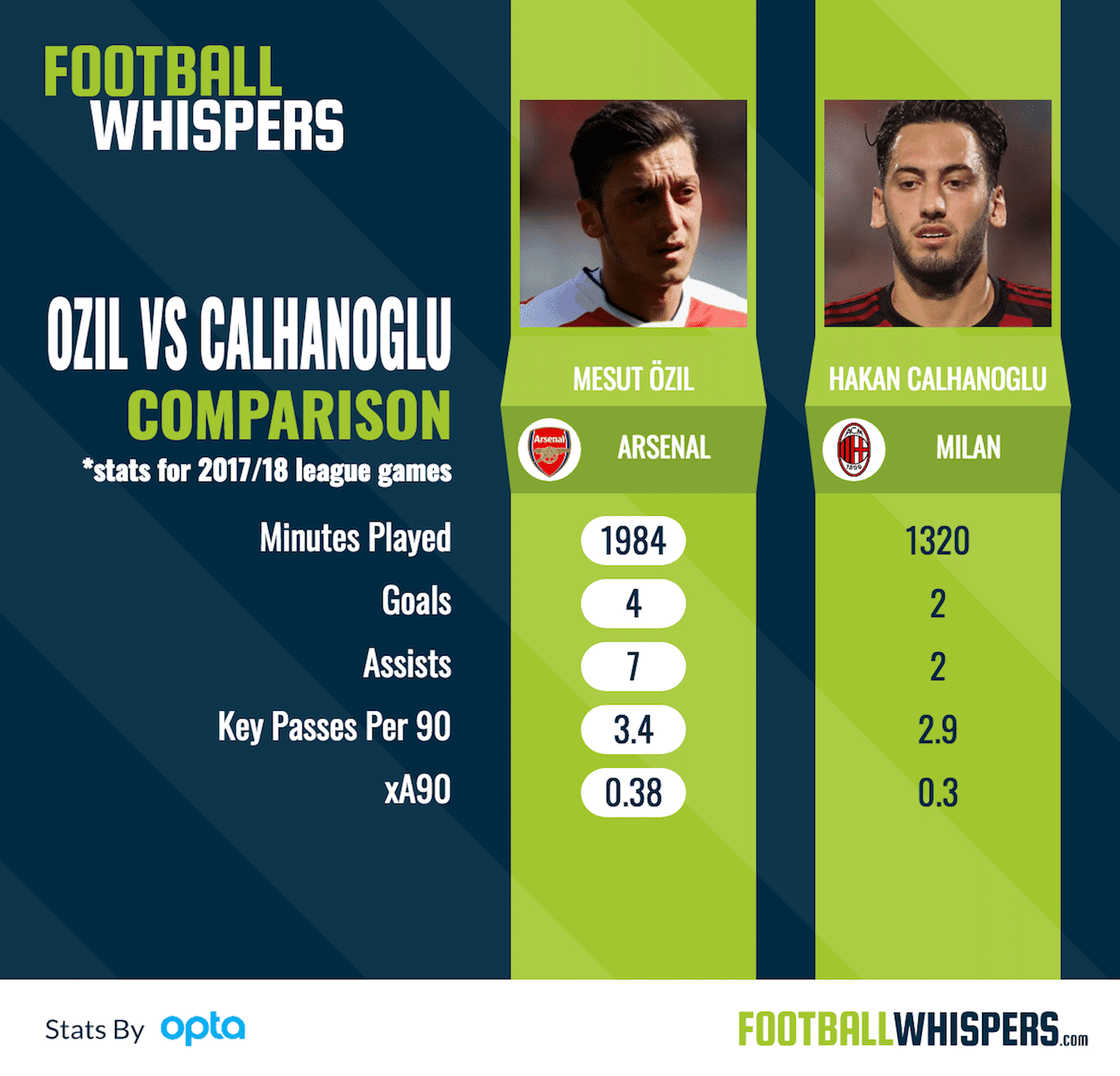 Like Özil, Çalhanoğlu is comfortable playing centrally as a No.10 or in a wide station from which he looks to come inside and provide a link between midfield and attack. And, as such, comparing the pair's key performance statistics for the season so far is instructive.

As the above graphic shows, despite both players featuring in a desperately inconsistent team this term, Özil has proven more productive.

The Gunners' No.11 betters Çalhanoğlu when it comes to goals, assists, key passes per 90 and expected assists per 90 (xA90).

Even though Arsenal have underperformed in 2017/18, and Özil himself has not been spared his share of criticism, the 29-year-old remains a reliable creative force, able to carve open defences even when he may not appear to be playing particularly well.

Çalhanoğlu, on the other hand, has struggled to find such a level of consistency this term, taking time to adapt to his new surroundings, while previous Milan coach Vincenzo Montella seemed unable to find a position and system in which to best utilise the former Bayer Leverkusen man.

But since Gattuso's arrival, Milan have settled upon a 4-3-3 shape with Çalhanoğlu on the left of the front three, and the ex-Hamburg youngster has improved. And although his average of 2.9 key passes per 90 and 0.3 xA90 falls short of Özil's numbers, the 24-year-old is the Italian side's highest performer in both categories.

At 29 and a veteran of two World Cups, Özil is five years Çalhanoğlu's senior and vastly more experienced. While the Milan man is still working towards fulfilling the potential shown in his early career, the German international is at the peak of his powers.

Arsenal will need Özil to prove his superiority if they are to overcome Milan and keep their fading season alive.