Joe Gomez has made a storming start to the 2018/19 Premier League season. The former Charlton Athletic youngster has been a key cog in Liverpool’s new-look defensive set-up alongside Virgil van Dijk and ahead of summer signing Alisson Becker.

He’s expected to be named in Gareth Southgate’s England squad for the upcoming matches against Switzerland and the USA. A call-up would be just rewards for his fine start to life at Anfield as a centre-back.

It will complete what has been quite the turnaround for the 21-year-old.

An ankle injury he sustained in March while playing for the Three Lions derailed his season. He returned too soon for the Reds and played through the pain against West Bromwich Albion and Stoke City, for the good of the team, before he was forced to miss the Champions League final and the World Cup after needing surgery to help rectify the ankle problem.

He headed into the new season in contention to start for Jürgen Klopp's side with Dejan Lovren given an extended holiday after his World Cup exploits with Croatia. The versatile centre-back was up against Joël Matip, Ragnar Klavan and Nat Phillips for a place beside Van Dijk and he got something of a lucky break when the former Schalke man picked up a muscle injury during the International Champions Cup.

He grabbed the opportunity with both hands and forced Klavan to watch from the sidelines as he struck up an encouraging partnership beside the Dutch powerhouse. He played his way into Klopp's starting XI for the season opener against West Ham United.

Gomez did more than enough. Not only did he get the start, his performances forced the experienced Estonian international to seek pastures new and he's now playing in Italy with Cagliari.

Buoyed by the news of an injury to Lovren, the Liverpool No.12 knew it was his opportunity to make the centre-back role his own if he continued to impress. He's gone from strength to strength as part of the first-choice defensive pairing, with the Reds yet to concede a goal in the Premier League.

His latest outing, a 1-0 win over Brighton & Hove Albion to lift the Merseysiders to top spot in the Premier League, resulted in Klopp heaping praise on the youngster.

“He has been very good and today was a big test,” said Klopp. “Obviously Brighton thought ‘let's pick Joe Gomez for the long ball challenge with Murray' and Joe did really well.

“I don't think he made one foul. He won maybe 70-80 per cent of those duels and Murray had one or two foul situations, and from my point of view (to give) a third or fourth one would not have been a mistake either. Joe did really well. He is a good footballer. I like how his confidence is growing as well. His speed is good, and there are a lot of nice things for us.”

However, despite not putting a foot wrong in his appearances so far, his role in the starting XI is far from assured.

The Liverpool boss rates Lovren highly and is often vocal in his support of the ex-Southampton man. Speaking prior to the World Cup final, Klopp praised his centre-back: “People very often judge other people pretty early. Since I came in, maybe Dejan made three or four mistakes, two of them in the Tottenham game, but it's for sure not 15 or 20,” he told Liverpool's website.

“90 per cent of the time he played outstanding, 95 per cent absolutely OK, and five per cent probably he was not at his best. But you will find these problems for pretty much all the players in the world.”

The 29-year-old is expected to return to the first-team fold after the international break. But should the World Cup runner-up reclaim his place in the starting XI straight away, or should it be it Gomez's to lose? Here, we take a look at what both of the players bring to the Liverpool team. 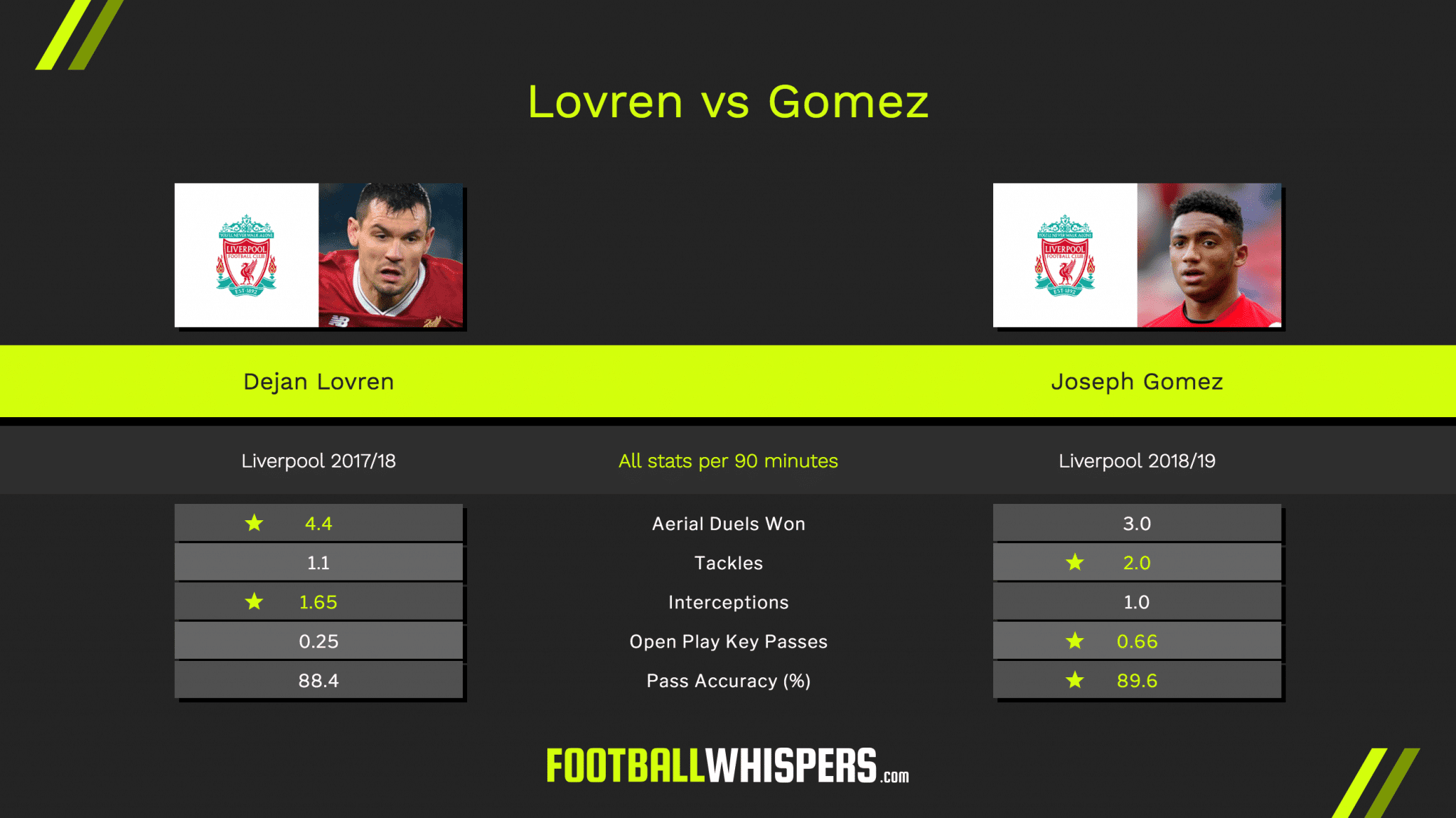 Now, before reading too much into these stats it's worth noting that Gomez's numbers are over a three-game period this season – a small sample size – while Lovren's are taken from the 29 appearances he made during the 2017/18 Premier League campaign.

Furthermore, the level of opposition has to be taken into account. The Reds are yet to play any of the top six teams, with Crystal Palace, a team that finished 11th last term, being the best team they've faced so far.

Having said that, there's an argument to be made to suggest Gomez has outshone £75million winter signing Van Dijk in all three of the matches, and that's no easy feat.

Gomez may be winning fewer headers on a per-90-minute basis but his aerial duel win rate percentage is similar to Lovren's, and he's playing beside a dominant Van Dijk. Both right sided centre-backs are aggressors and both play on the front foot, the fact both come in with over 2.5 interceptions and tackles per 90 minutes is no surprise.

An interesting stat, however, is the open-play key passes one. Liverpool's defenders often see a lot of the ball and are tasked with starting attacks. Whereas Van Dijk looks for the long diagonal passes, his centre-back partner is the one to carry the ball into the midfield and pick out incisive passes.

Lovren, though he has an 88.4 per cent pass success rate, isn't the most probing player when in possession. Gomez, on the other hand, has already showcased his ability on the ball in the opening three matches, breaking the lines with perfectly weighted passes into the feet of the attacking trio.

His open-play key passes stat is more than double that of Lovren's. Again, it's worth taking into account the quality of the opposition faced and their style of play. Nevertheless, it's an impressive stat.

The Croatia international may have impressed at the end of last season but Gomez has caught the eye in his absence and with both players similar in profile it doesn't make sense to drop the three-cap England international without just cause. He could make himself at home alongside Van Dijk for the foreseeable future.