Jimmy Floyd Hasselbaink to Eidur Gudjohnsen, Stamford Bridge has been the stage on which these marksmen have fired the Blues to title triumphs and cup successes, helping to alleviate the disappointment of Mateja Kezman and Andriy Shevchenko.

When Diego Costa departs which, according to recent reports, could very well be this summer, where will he rank among Chelsea’s finest goalscorers in the Premier League era? The stormy Brazilian-born Spain striker has enjoyed three richly productive seasons spearheading Chelsea’s attack, firing the Blues to two league titles, an FA Cup and a League Cup, but will he be remembered as fondly as Drogba and Zola?

We’re going to operate on the idea that Drogba was Chelsea’s greatest striker before Costa, so let’s take a look at if Costa has managed to knock the Ivorian off his perch.

Fastest off the mark

One of the most important points to consider is how seamlessly Costa adapted to life in England following his arrival from Atletico Madrid in 2014.

Costa exploded onto the scene with seven goals in his first four games for Chelsea, including a stunning hat-trick against Swansea and a double in a thrilling 6-3 win over Everton, immediately laying a marker of the quality finishing fans – and opposition defences – could expect.

In fact, while Costa has had his troubles with form, fitness and suspensions, he’s been largely consistent in terms of delivering goals, scoring 52 in 87 appearances – an enviable record. While 12 goals in his second season was a considerable step down, he’s been revitalised – like much of Chelsea’s squad – under Antonio Conte.

With two games left in his season, Costa is sitting on 21 goals – equalling his first season’s tally – and in April became the fastest Chelsea player ever to reach 50 Premier League goals, requiring just 85 games to do so.

Comparing that to Hasselbaink’s 94 and Drogba’s 106 really puts Costa’s achievements in context. The regularity with which Costa has found the net catapults him above his predecessors and it’s difficult to see his 0.59 goals per game ratio being surpassed in the near future.

A scorer of important goals

Like all great strikers, Costa scores important goals at pivotal points in the season, goals that have directly contributed to Chelsea’s success. For instance, his goals this season have been worth 15 points alone, more than any other player in the division. His worth is unquestionable, but that is nothing new at Chelsea.

Drogba established himself as a sensational ‘big-game player,’ and plundered some of the most-important strikes in Chelsea’s recent history. Drogba, like Costa, loved the grandest stage, which explains his remarkable record in cup finals.

The fearsome Ivorian came up with an extra-time winner against Manchester United in the 2007 FA Cup final, which stopped Sir Alex Ferguson’s side from winning the double that season. Two years later, in another FA Cup final, Drogba’s equaliser against Everton inspired a Chelsea comeback, before lifting the Blues to back-to-back cup successes with his free-kick against Portsmouth in 2010. Drogba then scored his fourth goal in as many FA Cup finals against Liverpool in 2012.

On top of that, Drogba’s finishing proved crucial in during Chelsea’s triumphant Champions League campaign in 2012. He scored in the last-16 against Napoli, the semi-final to edge Barcelona, while his 87th-minute header against Bayern Munich in the final brought the game into extra-time. When it went to a penalty shootout, Drogba dispatched the decisive spot-kick on Chelsea’s greatest-ever night.

Yes, while Costa may not have been given as many opportunities in games like that, simply nobody can rival Drogba as the king of the big moments.

Breaking down the repertoires of finishing

Strikers like to give themselves every opportunity of scoring. If they’re fleet-footed, a lot of their goals may come via counter-attacks, while they’re a totemic presence, like Tore André Flo, they’ll excel in heading department. Being a dead-ball specialist also helps.

Drogba scored 17 Premier League headers for Chelsea during his nine seasons at Stamford Bridge, while Costa has scored five in just about three seasons. On that basis, hypothetically speaking if Costa were to have a nine-year Chelsea career he would score 15 headers, meaning there isn’t much to separate the two strikers in terms of aerial prowess. While Costa may be more associated with his barrelling runs, he has still proven adept with his head.

Drogba certainly had free-kicks in his weaponry and scored six goals from them in the league, while Costa has never scored one. On top of that, Drogba would appear to be more clinical under pressure. According to the Premier League’s official website, Drogba only ever missed 13 of what they call ‘big chances,’ while Costa has already missed 27. 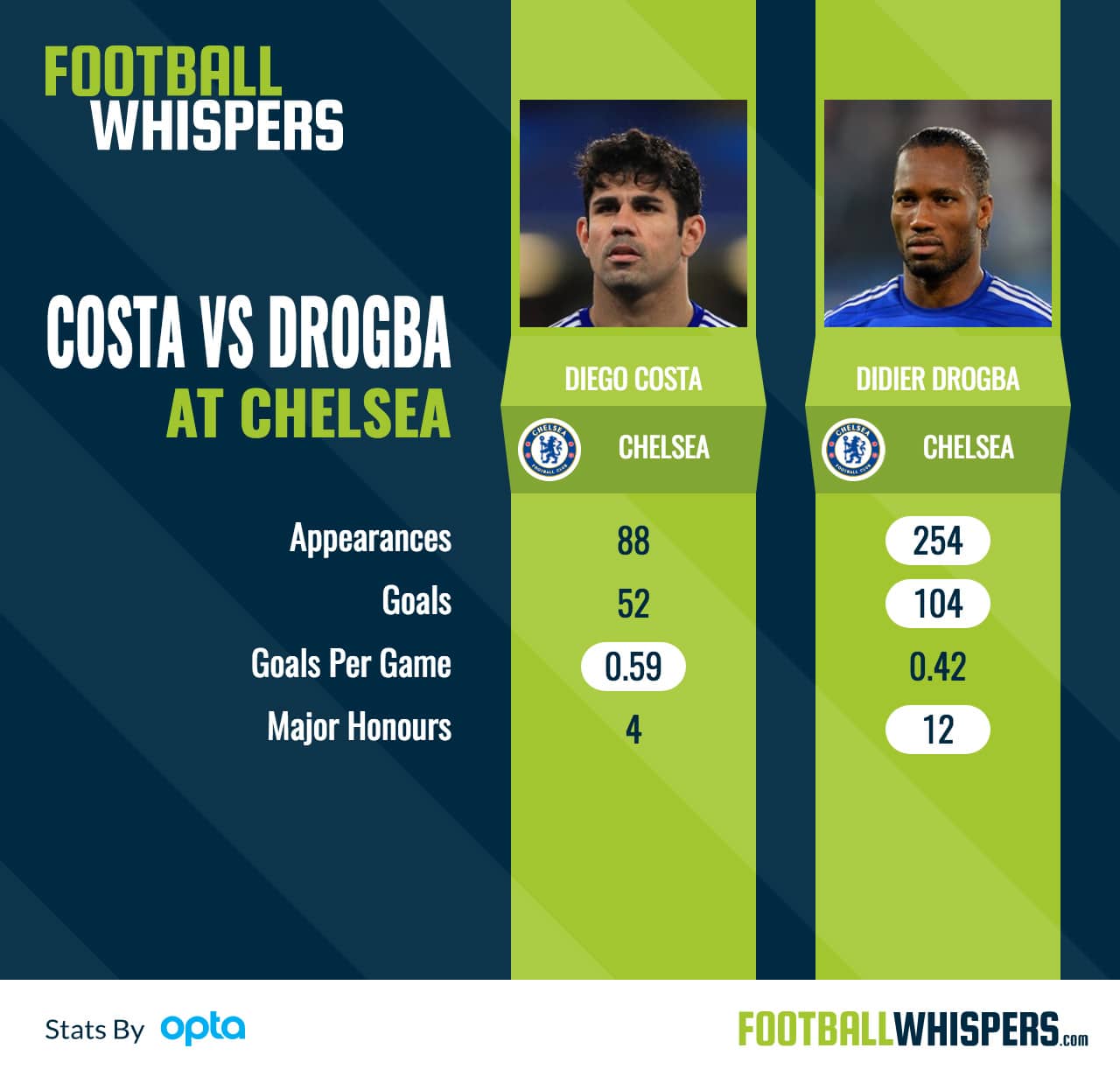 Zola, Hasselbaink and Gudjohnsen will always be remembered fondly by Chelsea supporters, but there can be argument that Drogba and Costa’s scoring exploits have transcended their popularity to make them the club’s two greatest strikers since the rebranding of English football.

Of course, while someone like Zola will always be universally-loved, Costa and Drogba have both endured difficult spells which have fractured their relationships with teammates, managers and the supporters.

Drogba had a slow start to his Chelsea career, scoring just 22 times in his first two seasons. Then, at the end of a stellar 2007/08 season, Drogba became the pantomime villain when he was sent off in the Champions League final for slapping Nemanja Vidic, perceived as a microcosm of the striker’s form at that stage: devastating and baffling in equal measure.

Had Drogba still been on the pitch, he perhaps would have scored the spot-kick John Terry missed. A year later, Drogba’s reaction to Chelsea being dumped out of the Champions League by Barcelona drew widespread criticism, with many branding him as a petulant, sore loser.
Everyone and their grandmother knows Costa is a firebrand, and that has often worked against his image. The striker has been involved in countless confrontations with opposing players and, while the majority of them have been kept within the spirit of passion, his ugly side has reared its head at times, like his scuffle with Arsenal’s Gabriel Paulista back in 2015. However, despite a reputation that clearly precedes him, Costa has never been sent off for Chelsea in the Premier League (but has been banned retrospectively twice).

Perhaps what sets Drogba and Costa apart, though, is their relentless desire to succeed with Chelsea. To say that Costa does not want to achieve the same level of success is ludicrous, but he looks set to leave for China when he’s only 28 – and still has much more to offer.

That differs enormously from Drogba, whose immense character was always such an impressive facet of his personality. Following the disappointment of the Champions League exit in the 2008/09 season and the fact that he ended that campaign with only 14 goals (his lowest at that stage), many speculated that Drogba would leave. Instead, he fought back to score 37 in 44 appearances next season as the Blues won a league and cup double, with Drogba the devastating focal point in attack.

If Costa leaves in the summer, he will be turning his back on such an exciting Chelsea project under Conte, one which has the potential to extend their Premier League reign and even conquer Europe. Drogba moved to China when it was clear his race in England was run; Costa’s wouldn’t make nearly as much sense.

If Costa leaves to join Tianjin Quanjian in the summer, his work at Chelsea will always be lauded, but it won’t seem complete. Yes, Drogba may have returned for a single season in 2014 to little effect, but his first spell had a sense of finality when he lifted the Champions League to bow out after eight years of faithful service. His exploits earned him four Premier League medals, two Golden Boots and two berths in the PFA Team of the Year, and it’s difficult to understand why Costa wouldn’t want to match such achievements.

At the moment, Drogba stands taller than Costa in Chelsea’s pantheon of Premier League great but, should the Spain international stay and continue to be Conte’s goal-provider-in-chief for another season, the argument could be much closer this time next year.