Before Kylian Mbappé and Ousmane Dembélé, there was Kingsley Coman.

A Paris Saint-Germain academy graduate, the fleet-footed flyer made headlines when it was revealed he'd chosen to run down his contract in the French capital and move to Juventus ahead of the 2014/15 season. It was a move not too dissimilar to that of Paul Pogba’s two years earlier.

For those who had watched Coman closely, this was considered a coup for the Turin giants. He had it all. Explosively quick with the ball sticking to his feet no matter where he was on the pitch, he could beat opponents on both the outside and the inside and, perhaps most importantly, he was a serious goal threat.

He was still very raw and this was evident with just how wasteful he could be in possession. But the ability was there, it just needed to be harnessed properly.

Coman was used sporadically during his first campaign in Serie A and made 14 appearances in total. Not content with this, the Frenchman pushed for another move, this time to Bayern Munich on an initial loan.

Playing under Pep Guardiola was evidently a selling point. In Bavaria, Coman looked right at home. The youngster was being used from the start and he was delivering in the form of goals.

As the season progressed, his influence on the team increased. In March 2016, he grabbed three assists in a single match. In the very same week, he came off the bench to in a Champions League game against parent club Juventus. He proceeded to score and assist as Bayern claimed a 6-4 aggregate victory.

Unsurprisingly, the German club made his move permanent and paid €21million.

During the 2017/18 campaign, he revealed former boss Guardiola understood him. He told France Football: “I was perhaps in a position that suited me a bit better [under Guardiola]. I had fewer injuries too. I played more on the wing, and the coach asked me to take people on. That's what I do best, it's the essence of my game.

“This season [under Ancelotti], it's a bit different, but a good player must be able to adapt to instructions and respect the choices of his coach.”

If reports are to be believed, Guardiola wants to be reunited with the Frenchman, with Manchester City in the market for a Leroy Sané replacement. The German winger is a transfer target for Bayern, plans which would see him bench Coman. 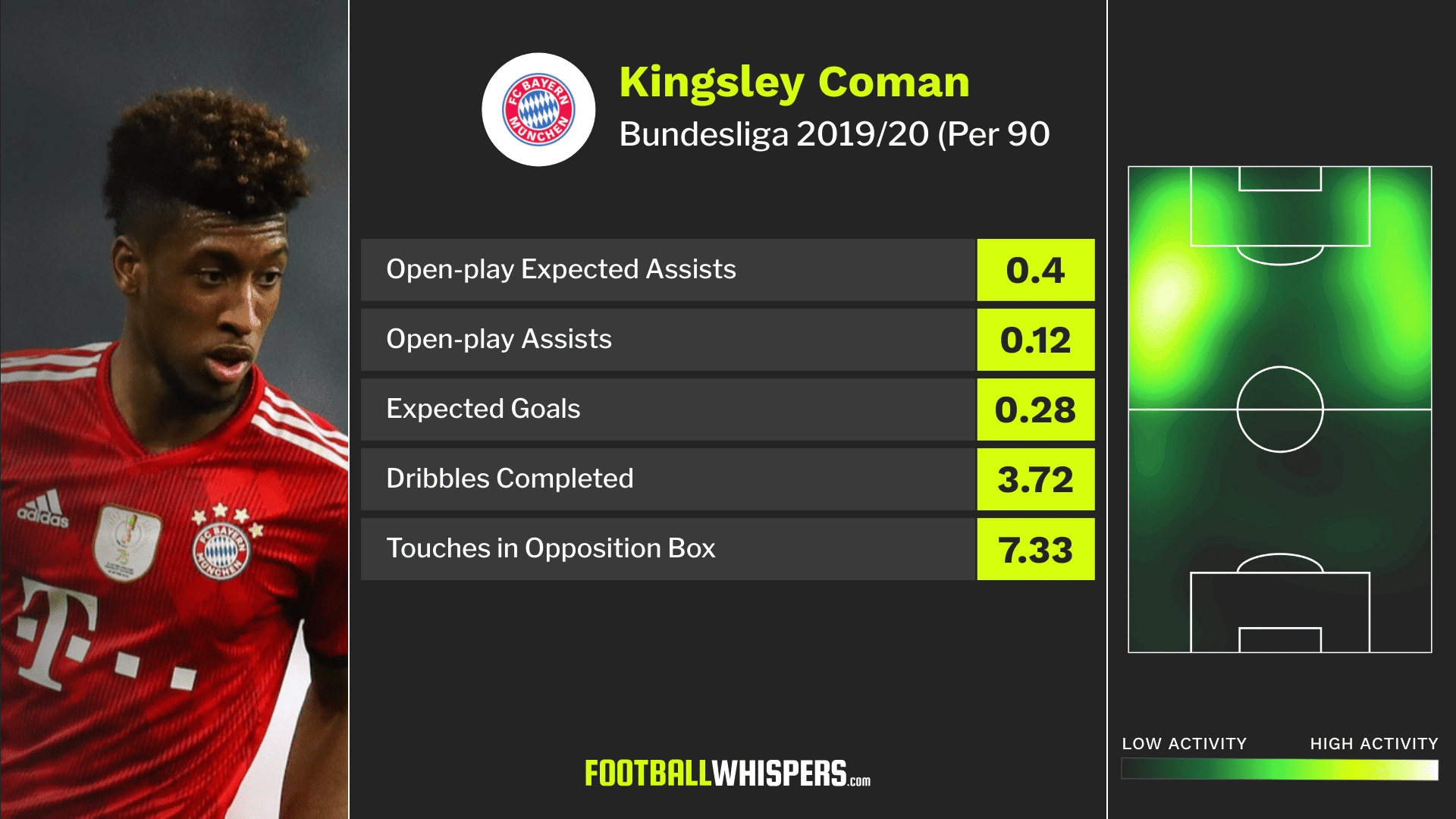 The two do share similarities but the one big difference is the fact Sané is a traditional winger who sticks to the byline on his stronger side while Coman prefers the left side so he’s able to cut in on his right foot.

Finding a like for like replacement for the former Schalke man would’ve been near impossible with old-school wingers now nearing extinction. It’s wise on City’s part to diversify.

The 23-year-old is a goal threat, too, with an expected goals average of close to 0.30 – exactly what Sané managed last term. Coman attempts more dribbles and completes a higher percentage of them, and this while playing in a side currently underperforming in the eyes of many.

Under Guardiola, Coman could be truly sensational. He could deliver on his early career potential and finally rival Mbappé and Dembélé for the crown of France’s greatest entertainer, just as many had expected when the trio emerged one season after the other.