Top free betting tips and odds for Stuttgart vs Cologne

Stuttgart focuses on adding critical three points when they welcome Cologne in the final game of Bundesliga 2021-22.  The Billy Goats dropped three points in the last game playing at home.

Cologne has been going through successive wins recently and won four of the last five matches. On the other hand, Stuttgart are out of form and are yet to win in the previous seven attempts. The Reds are also without a win from the last three home duels while the Billy Goats will be confident over the consecutive two away victories. The last two H2Hs also ended in the favour of Cologne and we don’t see any change in the final result of this game.

Goals at both ends of Mercedes Benz Arena

Despite not having the consistency of scoring, Stuttgart succeeded to score in six of the last seven home attempts, securing zero clean sheets in that duration. On the contrary, Cologne failed to score in the previous attempt but they held a sequence of scoring in consecutive four games before that. None of the last three H2Hs concluded with BTTS outcomes but based on the current stats, we predict the change of trend in this game.

Stuttgart vs Cologne: Check out the best odds and the latest stats

Stuttgart vs Cologne: Check out the team lineups

The Swabians ended their third of the last four games in a draw in the last game, clipping the title winner Bayern Munich to a 2-2 score. But Stuttgart could manage only six wins in the season so far and stay in the relegation zone at sixteenth place. The team manager Pellegrino Matarazzo will have seven players out of the game due to injury issues.

The Billy Goats broke their streak of four wins and lost in the last game against Wolfsburg. A victory could help them enter the top six as Cologne are currently standing at the seventh position with 52 points. Sebastian Andersson is still out of the selection due to coronavirus.

Questions About Stuttgart vs Cologne 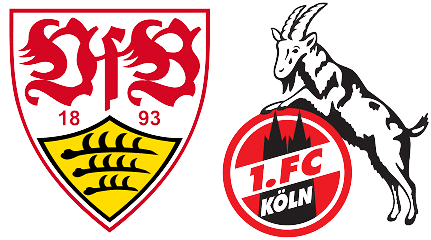 Where is the game being televised? beIN Sport Max (Fra), Sky Bundesliga, Viaplay.