For the third week in a row, Cologne registered a 1-1 draw. Steffen Baumgart will be pleased with the result as they have come against teams that were competing for UEFA European competitions. The expectations will be higher as they host struggling Greuther Furth at the Rhein Energie Stadion on October 1.

Here are our predictions for Cologne vs Greuther Furth.

Greuther Furth's 1-1 draw with Arminia Bielefeld following their 5-1 demolishing by Stuttgart was supposed to usher them to higher realms. It has not gone according to the plan as the Cloverleaves have lost three matches in succession. That tally is set to increase as they travel to the Rhine Energie Stadion to take on Cologne. The Billy Goats are unbeaten in four fixtures and have a positive history against them, remaining unbeaten against them in seven meetings.

The last two meetings between Cologne and Greuther Furth saw the Billy Goats score eight goals without a reply. Another high scoring affair is expected as the Cloverleaves have conceded 16 goals this season, while Cologne has allowed half of this tally but have impressed with ten strikes to their name. The mixture of poor defence on either end of the pitch should provide us with goals as the two outfits face-off for bragging rights.

In the last five meetings between Cologne and Greuther Furth, the latter has only scored one. We are predicting that tally to increase this Friday night. This has more to do with the Billy Goats porous defence than their rivals scoring ability. Cologne has conceded in each of their competitive outings this season and that will be the case as Greuther arrives at the Rhine Energie Stadion.

Cologne vs Greuther Furth: Check out the best odds and the latest stats

Holstein Keil's loss of form allowed Cologne to hold their Bundesliga status. With just one defeat in the six top-flight outings, the Billy Goats are making the most of their second chance. However, a succession of 1-1 draws has left many wondering if their start to the new campaign was a false dawn. They can relieve pressure and silence naysayers with a positive result against Greuther Furth.

The Cloverleaves are winless in the current campaign, crashing out of the DFB Pokal at the first time of asking and struggling in their Bundesliga outings. They have lost all but one of their competitive engagements and enter this fixture on the back of three successive defeats. Odds are against them as Cologne thrashed them 4-0 in their most recent couple of meetings.

Questions About Cologne vs Greuther Furth 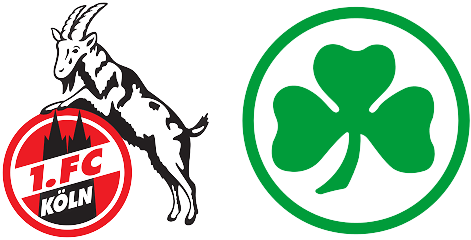 Where is the game being played? Rhine Energie Stadion.