One of the more interesting matchups in the upcoming EFL Cup round scheduled for Tuesday, August 23rd is the Colchester vs Brentford duel. Here is our preview of this game followed by some free betting tips.

If you need assistance to determine what is the right bet for Colchester vs Brentford, check our top betting picks for this game:

Brentford to Win at Half Time and Full Time

So, the two teams are not miles away just in terms of quality, but Brentford is actually in better form as well. With that in mind, we expect a commanding performance and a win for the guests after they take the lead in first half.

With an average of 4.33 goals per game after the first three rounds in Premier League, Brentford has the highest average of all teams in the league right now.

Meanwhile, Colchester averaged 2.60 goals per game in League Two so far and that only makes us more confident in our next prediction, which is over 2.5 total goals.

Before you decide on a bet for this game, let's take a closer look at both teams first:

After the first five rounds at the start of the new League Two season, Colchester is sitting in the eighteenth place with just four points. Clearly, that's far from a great start for which their fans were hoping for, but it's not that far from the actual expectations from this team. On the bright side, Colchester reached this stage in EFL Cup by eliminating the favoured Ipswich in the last round.

When it comes to team news, Colchester's captain Tommy Smith remains out with a foot injury. The team will also be without Emyr Huws.

Minutes separated Brentford from getting a point over the weekend against Fulham, but Mitrovic scored a late goal to deny them. Still, Brentford started the new season in Premier League with one win, one draw, and one loss, which is currently enough to put them in the eighth place in the standings.

Meanwhile, the team is without injured Ethan Pinnock, Sergi Canos, and Kristoffer Ajer.

The top odds, stats, and more for Colchester vs Brentford

If you wish to bet on the best Colchester vs Brentford odds, check our list of odds taken from the main UK bookmakers: 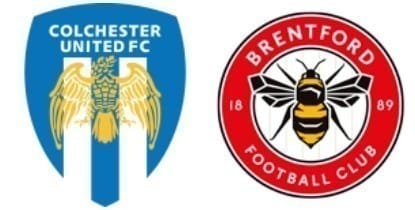