One wonders what Nathaniel Clyne was thinking on Thursday night. There was Callum Wilson, once of non-league obscurity, pointing to a bright England future alongside Jadon Sancho.

As has been well-documented, Wilson's rise into the England ranks has come after great suffering. His time in the Premier League with Bournemouth has been ravaged by injury, two separate instances of rupturing his anterior cruciate ligament spelling almost 500 days in rehabilitation.

But Wilson is a shining example of how desire can trump injury setbacks, of which there have been a few for Clyne. Three years on from sealing a dream move to Anfield from Southampton, and with 14 England caps to his name, the right-back finds himself at a crossroads, wondering if he can elbow his way back into the frame for both club and country.

Still five months out from his 28th birthday, the former Crystal Palace defender is now Jürgen Klopp's third-choice right-back. Trent Alexander-Arnold has cemented his place under the German while Joe Gomez, primarily Virgil van Dijk‘s partner at the heart of defence, can deputise when the 20-year-old isn't starting (like against Manchester City in October).

It's been a rough road back for Clyne. Signed by Brendan Rodgers in the summer of 2015, he was virtually ever-present during Klopp's first 18 months in charge.

Then, after having appeared in all but one of Liverpool's Premier League games during the 2016/17 season, disaster struck. A back injury last summer eventually required corrective surgery, ruling him out for eight months.

He played 90 minutes in April's scoreless Merseyside derby, benefitting from Klopp picking his team with the Reds' quarter-final second leg against Manchester City in mind.

But it didn't pave the way for a route back into Klopp's plans. There was tentative talk about a move away in the summer but Clyne's focus never strayed from challenging Alexander-Arnold for both Liverpool and England's right-back spot.

The youngster's goal for England in the friendly win over the United States may have been a lifelong dream come true, but sections of Liverpool's fanbase believe he may benefit from a spell out of Klopp's line-up. Alexander-Arnold temporarily lost his place after a difficult night away to Napoli and was hooked off at half-time in the defeat to Red Star Belgrade.

He grabbed an assist in the 2-0 win over Fulham, but with ten games between now and the end of December, Klopp may want to rest the young England star and make full use of his squad during the hectic Christmas schedule. 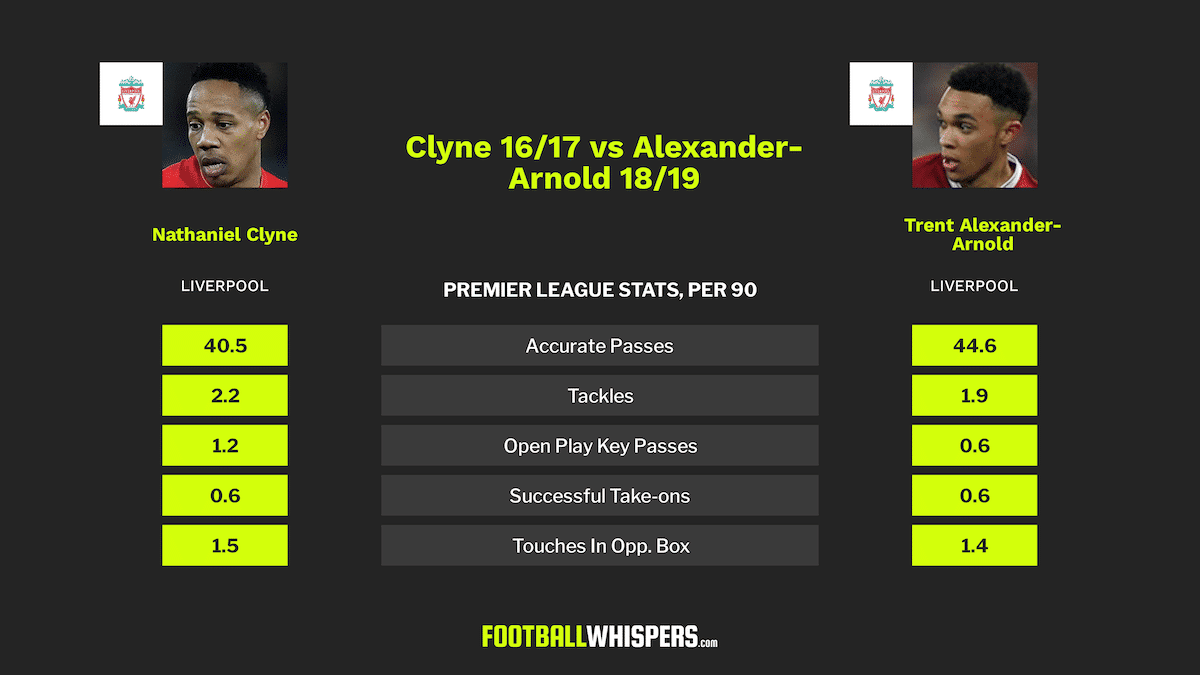 If Alexander-Arnold does have a weakness, it's defending. Last season, Roma targeted him at the Stadio Olimpico with diagonal balls over his shoulder and into space. While the full-back possesses excellent pace, his positioning has, on occasion, been exposed, most notably against Marcus Rashford when Liverpool lost to Manchester United in March.

There can be no doubting Alexander-Arnold's attitude, though. He rose to the pressure of a World Cup impressively and has continued to work hard under Klopp.

However, managing minutes at his tender age is important and, with Clyne knocking on the door and fresh after just 62 minutes of EFL Cup action under his belt this term, it may be time for the German to make full use of his squad and offer his more seasoned right-back a chance to stake his claim once more.