Cluj and Young Boys faced one another in the Europa League last season. Now a potential Champions League spot is on the line. Who will grab it? Find out with our Cluj vs Young Boys match preview with free tips, predictions and odds mentioned along the way.

Cluj vs Young Boys: Our picks

A tight match where the teams can't be separated

Both Cluj and Young Boys are unbeaten across their last five matches, which means neither will be approaching the tie with any doubts what they're capable of. Cluj have won five on the spin but the if you're rewind a further give then there have been two draws and a defeat. Young Boys are also in good form with two wins and three draws in five; they've only lost one in 10 too. It makes their form very similar. If you look back to the Europa League games last season then you'll see that this fixture – Cluj vs Youngs Boys – ended all square.

Just because we've made the prediction of this match ending in a draw it doesn't mean it will be a drab affair. Cluj have seen three of their last five matches go beyond the 2.5 mark with a total of 14 goals hitting the net in that period; that's a match average of 2.8. Young Boys have a very similar record in their last five. Again, three of their previous five have ended with a minimum of three goals in them. As for the average, that's 3.2 per game with a total goal haul of 16.

As you would perhaps expect, these two sides don't have an extended history of playing against each other; that's only happened three times – last year (twice) and once in 2013. Both teams have scored in every game played as yet. More recent form on both sides support the ‘BTTS yes' prediction too. Cluj have seen three of their past five games end with both teams on the scoresheet. That is also true of Young Boys. The latest results and h2h record lean towards both teams finding the net and the odds are reasonable too.

Check out the key stats ahead of Cluj vs Young Boys

Cluj arrive in this game as the home side and in good form having won five out of five matches. It will mean they'll be confident of grabbing a first leg lead to avenge last years Europa League loss. If they are to grab a win then Andrei Burca will be a key figure at the back whilst Rúnar Már Sigurjónsson is the man to watch going forwards; the Icelandic midfielder already has two goals and two assists from four qualifiers.

Young Boys won't be a pushover though and are in good form themselves having lost just once in 10 games. They also know they have what it takes to beat Cluj; they drew in Romania in last years second tier European competition before beating them at the Wankdorf Stadium. The key player that will need to perform for them to get a positive result is Jordan Siebatcheu, who has three goals in his last three outings. His role is particularly important with Jean-Pierre Nsame a long term absentee. 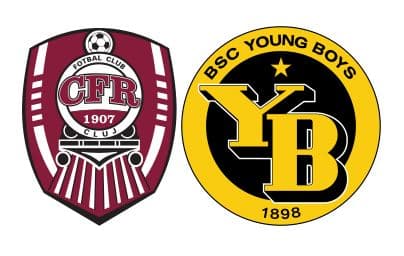