When it seems there is no end to the spending power of Premier League clubs it’s hard to imagine anybody even raising an eyebrow at the kind of money Sunderland paid Newcastle for Len Shackleton; but that’s just what happened when the ‘Clown Prince' joined the Mackems for a record fee on February 4th 1948.

He never won a trophy in his career, yet Len Shackleton remains one of the most well-remembered figures of his era. Often referred to as the ‘Clown Prince’, due to his theatrics and a genuine desire to play to the crowd, his ability can never be questioned, but his nonchalant outlook on life wasn’t appreciated by all in the game and often came at a cost.

With incredible ball control and a breathtaking body swerve ‘Shack', as he was known, could hit a ball and it would stay hit, despite having legs that often resembled pipe-cleaners. Displaying all the skills of a traditional inside forward of the time – dribbling, heading and passing – one of his team mates once said of him: “Once in possession the ball becomes his slave.”

Always one to have a trick up his sleeve he even perfected the art of putting back-spin on the ball so that it would roll towards an opponent only to stop and then return to him, causing great frustration for the opponent and hilarity among his team mates. It also wasn't unusual to see him back-heeling penalty kicks into the goal.

But his antics didn’t always go down well with his opponents or his team mates for that matter. He would rarely do his bit without the ball, and he was often accused of being unsportsmanlike as he mocked opposition full-backs by playing one-twos with the corner flag and sitting on the ball when opponents couldn't dispossess him.

On one occasion, in the dying minutes of a game his side were winning against Arsenal, he took the ball into The Gunners' penalty area before putting his foot on it, slicking back his hair and waiting for defenders to come and challenge him.

Born Leonard Francis Shackleton, in Bradford, on the 3rd of May 1922, Shackleton was a gifted and talented individual from a young age and, like many other promising youngsters of his time, he took the traditional pre-war route of joining a local club until he reached the legal age to sign a professional contract.

Despite being a Yorkshire lad he joined Arsenal in 1938, after their manager George Allison heard of his talents while playing as an amateur. There were initial fears about his size as players in those days tended to be ranked on their physique rather than ability; but Shackleton was never to find out what the future would hold at Highbury.

Initially thrilled to be chosen by Arsenal, his delight was short lived when he was told that he would never make the grade due to his slender build. He was released by the club close to the outbreak of the war and returned to his native Yorkshire to join second division Bradford Park Avenue as league football temporarily ground to a halt.

Despite the somewhat chaotic nature of wartime football, Shackleton soon made a name for himself at his new club, with those who played with or against him remarking that his ability was far greater than his peers despite his physical stature. 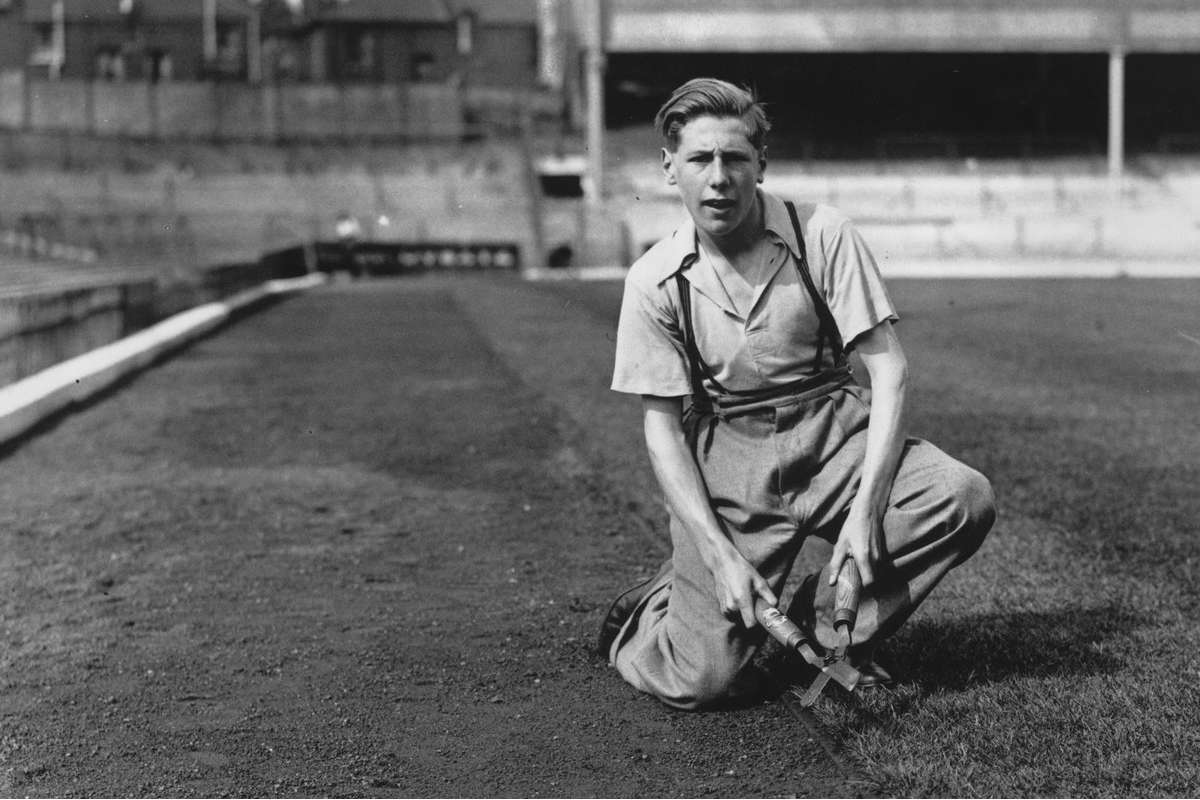 As well as working on a production line assembling aircraft radios in his second job, which so many players had during the war, Shackleton still smashed in goals for fun during his wartime spell at Bradford PA in a series of friendly matches and exhibition games.

He turned professional at the club shortly before Christmas 1940 and was given a signing-on fee of £10, which the club had to pay in installments as they were so hard-up. By the time football eventually resumed, Shackleton was becoming a much sought-after prospect.

Despite interest from First Division sides like Sunderland and Sheffield United, somewhat surprisingly he eventually signed for Newcastle in October 1946, basically becasue they were the only club willing to offer the £13,000 asking price that Bradford had slapped on him; making him the second most expensive player in the country.

He enjoyed an eventful 18 months on Tyneside if not the most successful, but things couldn’t have got off to a better start for Shackleton at Newcastle as he banged in an incredible double-hat trick as his new side thrashed Newport United 13-0 with three of his goals coming within the space of just over two minutes. The result is still a joint record score for a league game to this day.

His arrival added to a devastating forward line, which already included Jackie Milburn, Roy Bentley, Charlie Wayman and Tommy Pearson. They scored a incredible 95 league goals in the 1946–47 season, but their inability to defend, and the fact that they shipped 62 goals and suffered 13 defeats, meant they would only finish 5th. And hopes of winning the FA Cup were ended in the semi finals when they were thrashed 4–0 by Charlton Athletic.

Things weren’t all as they seemed, though, and despite his on-field performances Shackleton’s style soon began to grate with those in charge of the club. The situation was only made worse when he went on strike after the club apparently didn't give him the house he claimed that he was promised in his contract.

Eventually Shackleton got his way and the house that he claimed the club had promised him,  but the damage had been done and his actions meant there was now no going back.

That Christmas, Shackleton courted controversy  once again when he and goalkeeper Jack Fairbrother refused to join the club’s scouting party for their upcoming opponents Charlton Athletic, who they faced in the Third Round of the FA Cup. He subsequently handed in a transfer request, which he was eventually granted, having scored an impressive 26 games in just 57 games for Newcastle.

Shackleton had fallen in love with the people of Newcastle during his time at the club and the Geordie public worshipped him back in return, but there was little love lost when it came to the player and the club.

“The fans are so brilliant at Newcastle that I feel guilty when I call them names,” he later said. “But I'm not calling the fans names, I'm calling the club names. I've no bias against Newcastle — I don't care who beats them!” 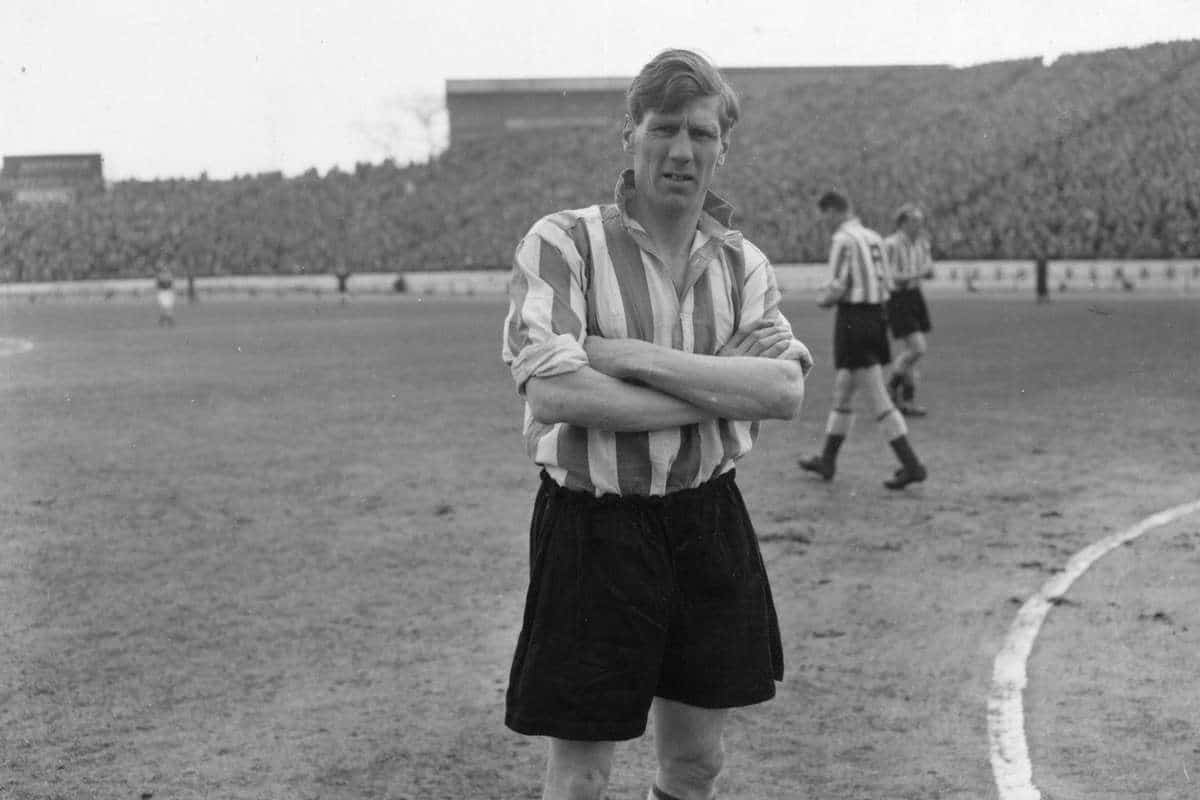 Shackleton was not short of admirers and once it was clear he wanted to leave Newcastle something of a bidding war broke out. Sunderland and Bolton Wanderers were the clear favourites and he would eventually choose Sunderland. The move would cost the Wearsiders an eye-watering £20,050, that was £50 more than the previous record which was paid by Notts County for Chelsea’s Tommy Lawton.

Shackleton was just one of a number of big name players brought in by the club for an incredible £250,000 during the post-war era, a spending-spree which, ultimately earned Sunderland the nickname of the ‘Bank of England' club.

Others followed, including Ivor Broadis for £18,000 before the club smashed the world transfer record again when they paid £30,000 for Trevor Ford a year later. But by the time he arrived, Shackleton was already something of a character at the club — and a Sunderland hero in the making.

Unfortunately for the Wear-siders the signings spectacularly failed to deliver, though, and despite the club’s financial outlay, immediate success never materialised. On Shackleton's Sunderland debut his new side were thrashed 5-1 by Derby County  finished just four points above the relegation places that season.

The following year they managed a much improved third place finish, which would prove the closest the club would get to the title whilst Shack was there, only a crunch end of season game against Manchester City being the difference as they missed out on the title by a whisker.

The lack of silverware meant questions were soon being asked and it wasn’t long before fingers were being pointed in Shackleton’s direction. Even record signing Trevor Ford left the club because he couldn't get along with the prodigious forward, later writing in his autobiography: “Where did Shackleton's antics get us? Precisely nowhere.” Shackleton was incredibly dropped to the reserves for his unpredictable behaviour even though he was the club's top scorer.

He did eventually return to the first XI, simply because his natural ability meant that it was impossible for him to be left out, and made his comeback in a game against his old club Arsenal as he once again dominated proceedings against a club he had never forgiven for letting him go as a youngster.

Like all mavericks Shackleton was seen as more of a hindrance than a help to his side and it was easier to cut him loose, rather than  trying to accommodate him into the team, and it was no different when it came to the national side.

Shackleton only received five England call-ups, and after his third appearance for his country in 1949 and would be in the international wilderness for another five years before his next cap, while 17 players were called up in that time. One England selector famously told a journalist: “We play at Wembley, not the London Palladium.”

Walter Winterbottom, England boss at the time, repeatedly tried to tame his antics, though commented in later years that although his tricks were great for the crowd, he often ignored a more simple and effective instructions.

Put simply, Shackleton played for himself, and not the team. And somewhat predictably in his final appearance for England Shack scored a wonderful goal in a 3–1 win over the then World Champions West Germany — but that was to be the last time he ever wore the famous three lions.

The end of his career was sad as it was forgettable. Fighting against relegation and plagued by an ankle injury, the Sunderland fans became tired of Shackleton’s antics and he was even booed and heckled during his final season. Despite that, he is still consideredas a legend in the North East and in 2011 he was voted into the ‘Sunderland Solid Gold XI'.

A career in journalism after his playing days had come to an end gave him the perfect platform to voice his opinions on everything from the establishment to his thoughts on fellow professional right up until his death in 2000.

In his 1956 autobiography, ‘The Clown Prince of Soccer', he even dedicated a whole chapter to those in charge of the game entitled ‘The Average Director's Knowledge of Football'. In true Shackleton style it consisted of one blank page.