There was a time, not so long ago, when Tom Cleverley was Roy Hodgson's go-to man for England. But this month marks four years since the now-Watford midfielder represented his country against Germany.

In a quirk of fate, Gareth Southgate's Three Lions hosted die Mannschaft at Wembley on Friday evening in preparation for next summer's World Cup in Russia.

Already without Alex Oxlade-Chamberlain, Adam Lallana, Ross Barkley and Nathaniel Chalobah through a combination of injury and lack of form, Southgate was not helped by Jordan Henderson, Dele Alli, Harry Winks and Fabian Delph pulling out.

There was, however, no room for Cleverley who has flourished since rejoining Watford permanently over the summer following an equally encouraging loan spell during the second half of last season.

The 28-year-old's omission all but ends his hopes of ever earning an England recall. If he can't get in a squad which contains the wholly uninspiring Livermore then clearly Southgate has decided international football is beyond the Hornets midfielder.

But is that right?

Cleverley's decline has been well publicised. Once part of a crop of young homegrown stars at Manchester United, he was a regular in Sir Alex Ferguson's last Old Trafford side and part of Stuart Pearce's Team GB squad for the London Olympic Games in 2012.

But he fell out of favour at United under David Moyes and was loaned to Aston Villa before a disastrous free transfer to Everton failed to reignite his ailing career.

For outsiders, Cleverley's January switch to Watford would have looked like the last throw of the Premier League dice for a player destined to slide into the Championship.

But back at the club where he shone on loan during the 2009/10 season while a promising teenager, Cleverley has rediscovered his best form. And yet he's ignored by Southgate at a time when the England coach is scraping the barrel for central midfield options.

There is no arguing that Cleverley would not get into a full-strength Three Lions squad. Whatever their shortcomings, Henderson, Dier, Barkley, Delph and Lallana all represent better options. Even Jack Wilshere, who was omitted on the basis he does not start enough for Arsenal, would have a better claim on the basis of his talent alone.

But friendlies against Germany and Brazil represent the perfect chance to see if Cleverley still has something to offer on the international scene without it being at the expense of anyone else. After all, those who have pulled out clearly feel they do not need to attend this meet-up to be assured of a place on the plane to Russia next summer.

Furthermore, what has Livermore done to justify his inclusion? Cork has shone in a Burnley side who are punching well above their weight while Dier, who captained England against Germany on Friday night, is one for the future as much as now. The same applies to Loftus-Cheek who has been earmarked as a special talent for some time.

Statistically speaking it's hard to make a case for Cleverley being left out in favour of the Baggies midfielder. 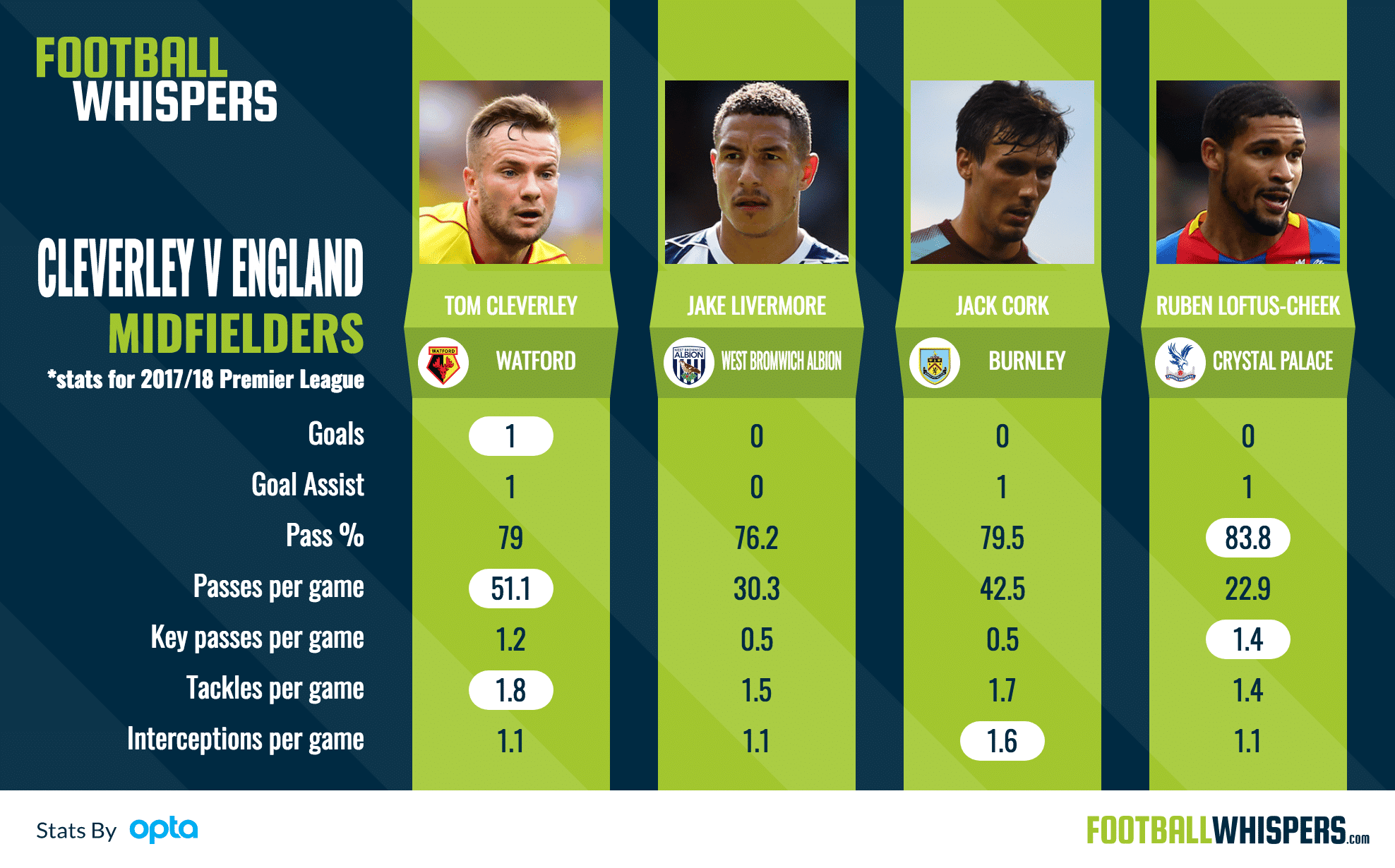 Excluding Dier, who is by some distance the best central midfielder in the latest England squad, the Watford man comes out on top for passes per game (51.1) and tackles per game (1.8).

It is hard to penalise Loftus-Cheek for his numbers in those metrics as the Palace loanee is playing in a side who are struggling at the foot of the table so see less of the ball – the Eagles' average possession per game is 46.5 per cent to Watford's 49.8 – and he is there to create rather than destroy.

But Cleverley's proficiency across a variety of measures underlines his value. He is not simply someone who sits and breaks up play and he can also contribute in the final third. He was superb for the Hornets in the opening weeks of the season at No.10 before Chalobah's injury, following his England call-up, saw him relocated to a deeper role.

And no, Cleverley isn't the only player who can count himself hard done by.

Dale Stephens has impressed for Brighton & Hove Albion since promotion while Newcastle United fans will be scratching their heads at Jonjo Shelvey's continued exile too.

Southgate has pulled no punches with this England squad. When asked about Wilshere's exclusion he simply stated players could not expect to be called upon if they weren't playing for their club. He has also shown, by handing Loftus-Cheek, Joe Gomez and Tammy Abraham their first call-ups, that he won't lean on the same old tired names regardless of form.

To some, Cleverley might represent just that; the washed-up product of a bygone era. But that could not be further from the truth and he deserved the chance to prove it.