Leicester City’s brief time in the Premier League has been characterised by high drama: there’s been a ‘Great Escape’, a title win, and even a Champions League run. This season, though, has been low-key compared to the previous three, yet has still presented an interesting situation all the same with the change of manager from Craig Shakespeare to Claude Puel.

Puel’s appointment was seen as underwhelming after a season at Southampton that looks a lot less tepid in hindsight, but Shakespeare’s appointment last year wasn’t exactly popular at the time either, coming off the back of the title-winning Claudio Ranieri being sacked.

Ranieri, though, was managing a team whose underlying production – as well as general league position – was on the slide in 2016/17. Shakespeare tangibly improved the team, with a change in their expected goal difference of +0.41 per game.

Puel’s expected goals difference is actually similar to Shakespeare’s tenure when taken as a whole, but look at it over time and it tells a different story. Fixture scheduling could be partly to blame, but after an initial dip, underlying performances have been steadily rising for some time now. 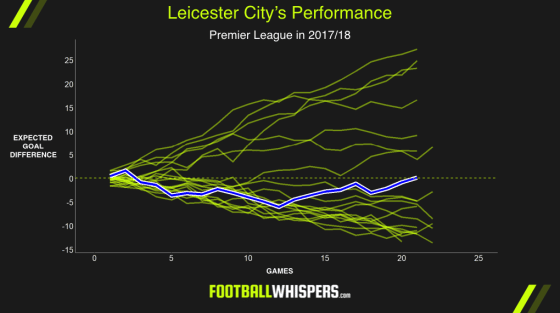 It’s striking, considering Puel’s previous placement at Southampton, that he, Shakespeare and Ranieri’s sides have all adhered to the same broad ‘Leicester City style'.

Under each manager, Leicester have been a side who take a high amount of shots from counter-attacks, defined as shots from possessions that come within 15 seconds of a team gaining the ball in their own half. 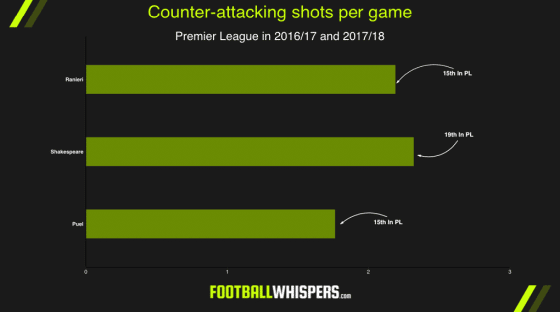 Shakespeare honed in on that direct play compared to the few months Ranieri had in charge during 2016/17, but given that Puel played a much more possession-based style at Southampton last season, it may be surprising to see his numbers here have hardly changed from Shakespeare’s.

Elsewhere, however,  the Frenchman has indeed changed things.

Under Ranieri and Shakespeare respectively, Leicester averaged 5.20 and 4.86 possession sequences with ten or more passes per game, both being among the lowest frequencies in the league during their time in charge. Puel’s Foxes have been doing this 8.86 times per game. That increase of about four whole lengthy sequences is the fourth largest increase for a team between these two periods.

So while the current iteration of Leicester still create chances from quick, attacking transitions, they also choose to – or possibly have a better understanding of when to choose to – keep the ball more frequently.

This control of possession may be a part of why Puel’s Leicester concede fewer counter-attacking shots than his two immediate predecessors. 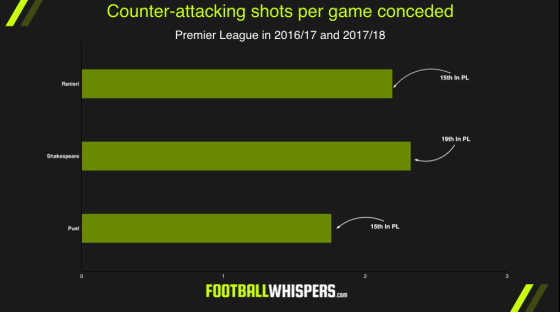 It’s worth mentioning here why this is a big deal. As Leicester themselves showed to great effect in 2015/16, taking advantage of counter-attacks to catch opponents unexpectedly tends to yield better chances.

While Shakespeare made Leicester more direct compared to Ranieri’s post-title team, they were also slightly more susceptible to counters themselves, as the above graph shows.

We can measure the ‘width’ of a counter-attack by taking the furthest left and furthest right point of the move, and Shakespeare’s side had more of a tendency to counter-attack across just one third of the width of the pitch than Ranieri’s or Puel’s. 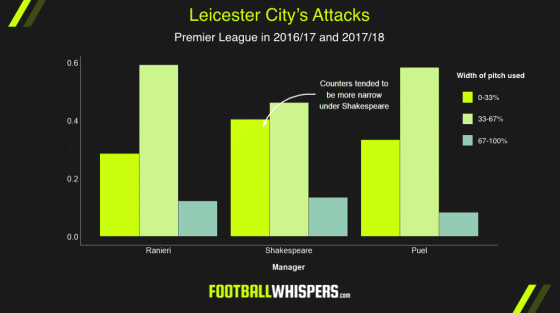 This tallies with what watching Shakespeare and then Puel’s Leicester has been like this season, the Frenchman adding much more of an evenly spread and defined structure to the team in possession.

Under Puel, the side has more often moved to a more orthodox 4-5-1 rather than the 4-4-1-1 which Leicester played in their title-winning season. The 4-5-1 lends itself more easily to horizontal interplay between the attacking players while on the move than Shakespeare’s version of the 4-4-1-1, as well as recycling the ball to retain possession, which we saw earlier with the 10-plus pass sequences stats.

Leicester have evolved, then, under each new manager who’s taken the helm in the past two seasons while still broadly keeping true to their counter-attacking base.

Puel has started to build on the foundations that his predecessors established, adding an extra dimension to their play. If he can keep expanding on this, with the added help of a summer’s worth of preparation and transfers, then Leicester should be primed to keep improving under his stewardship.