West Ham United aren’t a club that tend to shy away from the transfer market. This season the club has signed 19 players for both the first team and the reserve set-up, while 14 men have departed the London club.

Yet football tends to only look forward and if reports are to be believed, David Moyes and his backroom staff are interested in adding to their growing portfolio of players with the addition of Sporting Lisbon midfielder Rodrigo Battaglia.

So is this central midfielder the talented breakthrough that the Hammers so desperately need or will he be another dud to add to the growing, expensive pile of players Moyes still finds himself sifting through to this day?

Who is Roberto Battaglia?

Battaglia is a 26-year old midfielder from the town of Morón, situated on the outskirts of Buenos Aires. Despite earning eight caps for his country at U21 level, Battaglia has yet to earn a spot in Argentina’s senior national team.

The combative central midfielder won his break at Argentinian Primera Division side Huracán, where he played for just three years before grabbing the attention of Racing Club. He then moved to Portugal to join Sporting Braga.

However, Battaglia’s initial spell in Portugal didn’t go according to plan. After three years at the the club, the central midfielder had made just 22 league appearances and spent much of his time at lower Portuguese sides like Moreirense and Chaves, as well as a brief spell back in Argentina at Rosario Central.

It wasn’t until last summer, when the Argentinian midfielder joined Sporting, that his career really began to take off. At the heart of Jorge Jesus’ midfield Battaglia has helped his side challenge for this season’s title and along the way earned the intrigue of not only West Ham but also Inter, Roma and Napoli.

There isn’t much nuance to Battaglia’s approach to football. While some central midfielders may pride themselves on their passing or ability to create goals, Battaglia is undoubtedly a midfield enforcer intent on stopping opposing plays and winning the ball back.

The 26-year old currently averages 5.27 defensive duels per 90 minutes, suggesting that much of his time on the pitch is spent obstructing opposing players.

This breaks down to 4.4 aerial duels per match – of which he wins 58% on average – as well as 0.87 interceptions. Although neither of these metrics in isolation are particularly eye-catching they do suggest a player with a number of defensive strings to his bow.

Although some fans may value such an attribute as a positive – especially when considered through the prism of passion – there’s no denying that Battaglia’s style of play often leads to fouls.

In fact, when it comes to fouls across the league he current sits twelfth with 3.09 per 90 minutes in the Primeira Liga. Although it is worth noting that he has only picked up three yellow cards and not a single red in the league this season. That suggests his tactical fouling very rarely jeopardises his team’s chances of competing in games. 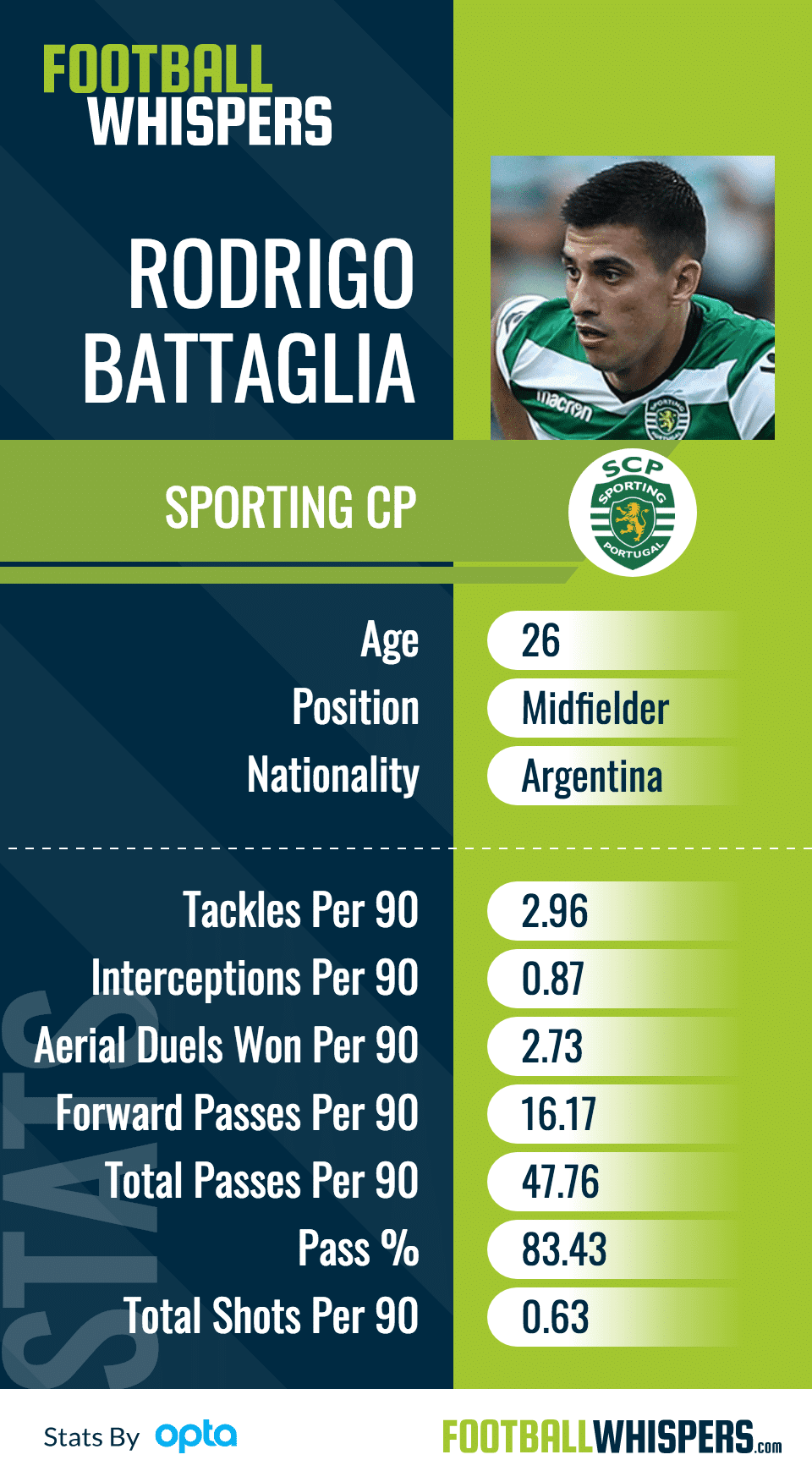 Despite his relatively unknown reputation within English football, Battaglia’s performances this season for Sporting have reportedly attracted a growing list of potential bidders, which naturally pushes his price up.

Similarly, the central midfielder currently has a contract with the Portuguese side until 2022 and is employed by a club that have become masters of squeezing the very best deals out of foreign clubs when they come sniffing around for new talents.

Last summer Sporting sold central midfielder Adrien Silva to João Mário went to Inter the year before for £36million. Although both of these players were far more established when they left the club there’s no doubt that Jesus and his backroom staff would only accept a very generous offer. Somewhere around £15-20million would probably work.

Although West Ham do have established central midfielders, such as Mark Noble, as well as defensively-minded players in the centre of the park like Cheikhou Kouyaté there’s no denying that the current system simply isn’t working.

Sure, much of the abhorrent defensive record can be put down to the defensive line, but a large chunk of responsibility lies with the cover West Ham’s midfield simply aren’t offering.

At the moment it looks as though the Hammers could use all the help in midfield that they can get and in Battaglia they’d certainly find a defensive player who knows how to frustrate opponents. Which would make him a valuable addition.