Liverpool have had many fine teams down the years, and many memorable seasons, but their 1987/88 league winning side produced 10 months of superb football that opponents simply couldn’t cope with thanks to an embarrassment of talent in pretty much every position.

They amassed 90 points that season, scoring 87 goals in the process. They only failed to score in four league games and in nine matches they hit the net four times, twice putting five past their punch-drunk opposition. They lifted the league championship trophy with four games of the season still left to play; but in all honesty they pretty much had it won by Christmas.

Throughout much of the 1970s and ‘80s Liverpool continued to produce teams that dominated at home and abroad and for many “Kopites” of that era, there was little chance of the game being played any better or in any more of a fulfilling way; or so they thought.

Much of Liverpool’s success had been built on continuity and consistency: Bill Shankly, who had retired in 1974, passed the baton on to Bob Paisley who, in turn, transferred power to Joe Fagan. These were all bana fide Liverpool men and very much products of the much lorded Anfield boot room.

So when Joe Fagan resigned from his post following the tragic senes at Heysel in May 1985, the club went for a younger man who was, nevertheless, steeped in the culture of the club, the Kop and the ethos as a whole.; a certain number 7 who had graced the anfield turf in the '70s and '80s – Kenny Dalglish.

Dalglish’s reign at Anfield couldn’t have got off to a better start, winning the league and FA Cup double at the expense of their nearest rivals in his first season as the seamless transition looked to have been an utter success; but there was no hiding the fact that he had inherited a team that was in transition.

This was an extremely talented bunch of players but a group which was ageing fast and was in need of something of an overhaul. Something that was highlighted in Dalglish’s second season when Liverpool ended the 1986/87 season empty handed, having had their league crown wrestled from their grasp by near-neighbours Everton.

Much of Liverpool’s glory had been built on the goals of Dalglish and Ian Rush, who formed one of the most lethal partnerships in football. Rush scored 139 goals in 224 appearances between 1980 and 1987; but his move to Juventus meant Liverpool would now have to look for another prolific scorer to fill his goal-scoring boots.

That man would be Oxford United’s striker, and Rush look-a-like, John Aldridge who signed for the Reds for £750,000 in the summer of 1987; but the spending spree didn’t stop there. In June, they lured the most talented player in the British game at the time, John Barnes to Anfield for £900,000 from Watford. A month later, Dalglish broke the British transfer record when he paid Newcastle united £1.9m for Peter Beardsley.

Not content with the mouth-watering prospect of having Peter Beardsley, John Aldridge and John Barnes in their forward line there was yet more to come in the form of midfielder Ray Houghton, who was also signed from Oxford in October 1987 for a mere £ 825,000. Nobody knew it at the time, but Dalglish had put together the best quartet in Merseyside since the Beatles. 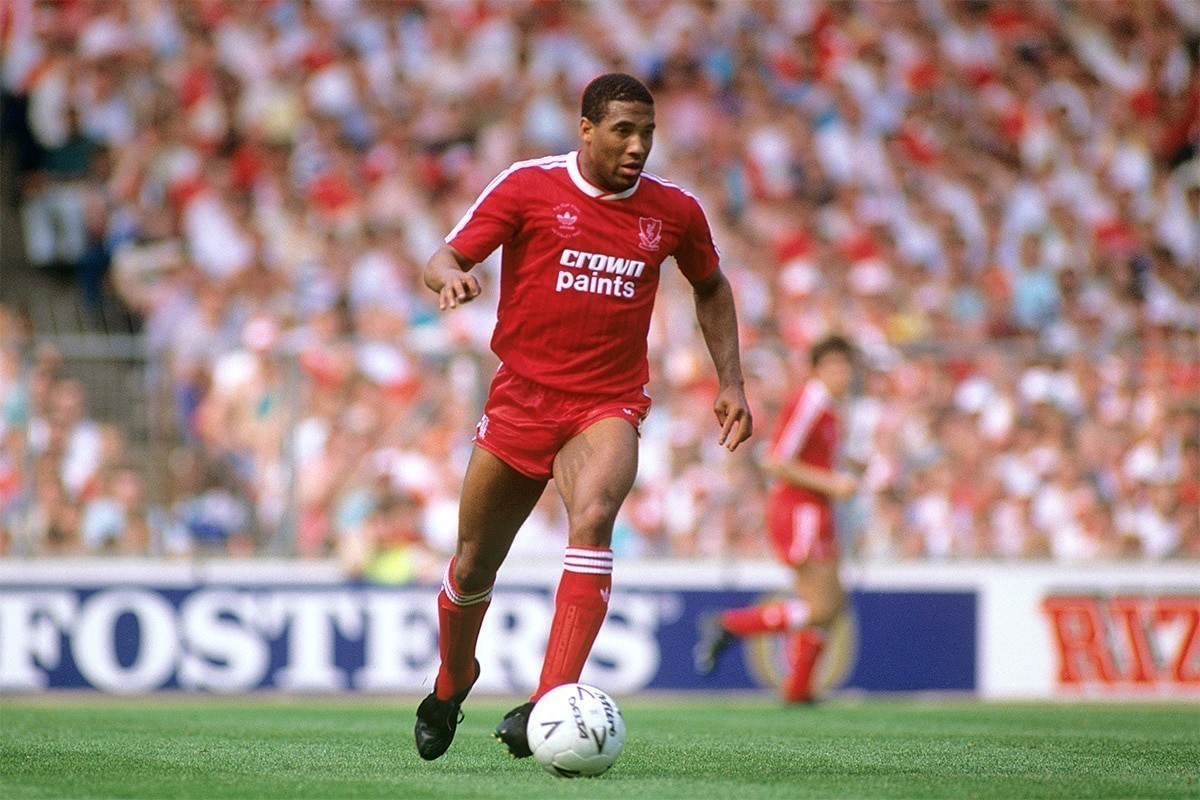 Liverpool fans couldn’t wait to see how their new recruits would gel with the existing squad members as they attempted to win back, not only supremacy from their rivals across Stanley Park, but the league championship title they felt should be theirs. However, a bizarre series of events meant they would have to.

A collapsed Victorian sewer underneath the Kop meant the Reds wouldn’t play at home until mid-September, with the side’s first three games of the season all being on the road. So it was Highbury where Liverpool’s newly assembled team took to the field as the country got its first glimpse of just what they had to offer on a blazing hot day. They weren’t disappointed as Barnes, Beardsley, Aldridge et al hit the ground running to earn an impressive 2-1 opening day win over Arsenal.

By the time they returned to Anfield for their first home game of the season, Dalglish’s men were still unbeaten, having won two from three, not to mention scoring seven times in the process. For their return to the Colosseum Oxford United would play the part of the Christians as they were soundly beaten thanks to goals from John Aldridge and John Barnes, on their home debuts.

The new additions fitted regulars such as Alan Hansen, Gary Gillespie, Steve Nicol, Ronnie Whelan and Steve McMahon like a glove to produce breath-taking football on a weekly basis.

“We had a great mix of players,” Dalglish told the Liverpool Echo some years later. “It was unusual for Liverpool to have two or three new players coming in straight into the first-team from the start of the season. Normally people went into the reserves and had to work their way in. For those new lads to settle so quickly was a great credit to them.”

As well as being tight at the back and solid in midfield Liverpool were also scoring goals for fun, putting teams to the sword on a regular basis; whether it was in front of an adoring Kop or away from home it didn’t seem to matter once the “Red Machine” was in full flow.

They scored four goals in a game on four consecutive games, winning  4-1 at Newcastle thanks to a Steve Nicol hat-trick, 4-0 versus Derby, this time courtesy of an Aldridge hat-trick, 4-0 against Portsmouth and 4-0 at home to QPR as Barnes’s skill and Beardsley’s trickery was just too much for their opponents. John Aldridge had also set a club record of scoring in 10 consecutive league matches at the start of that season and would eventually go on to net 29 times in total.

Another 4-0 win, this time over Barnes’ old club Watford on November 24 at Anfield, saw the Reds secure their place at the top of the First Division table, where they would remain for the rest of the season –  they still hadn't lost and it was almost Christmas.

As the season moved into the business end Liverpool showed no sign of relenting, rolling over opponents with almost effortless ease and the usually tricky Christmas and New Year period, which sees fixtures come thick and fast, posed no problems for them either as they won all six of their league games from December 19th and the end of January.

By mid-March Liverpool hadn't been defeated in 29 games and had advanced to the FA Cup semi-final having swept aside Stoke, Aston Villa, Everton and Manchester City along the way, meaning an unprecedented “double, double” of League and FA Cup seemed to be nothing short of a formality having achieved the feat three years earlier during Dalglish's first season at the helm.

As the derby fixture against Everton at Goodison Park rolled round on March 20th Liverpool looked set to beat Leeds United's record of 29 games unbeaten at the start of the season and match that of Burnley, who went on a 30-game unbroken streak back in the 1920s. But Wayne Clarke’s goal in a 1-0 win for Everton would prevent the Reds from making history; though it appeared to do little in terms of preventing their seemingly unstoppable march towards the title.

Two weeks after that defeat Liverpool would lose again, this time to Nottingham Forest, but it would matter not. Their nearest challengers, Manchester United, were still some 10 points adrift and never looked like making up ground, partly due to inconsistent form, but mostly due to the fact that Liverpool simply didn’t give them the opportunity. 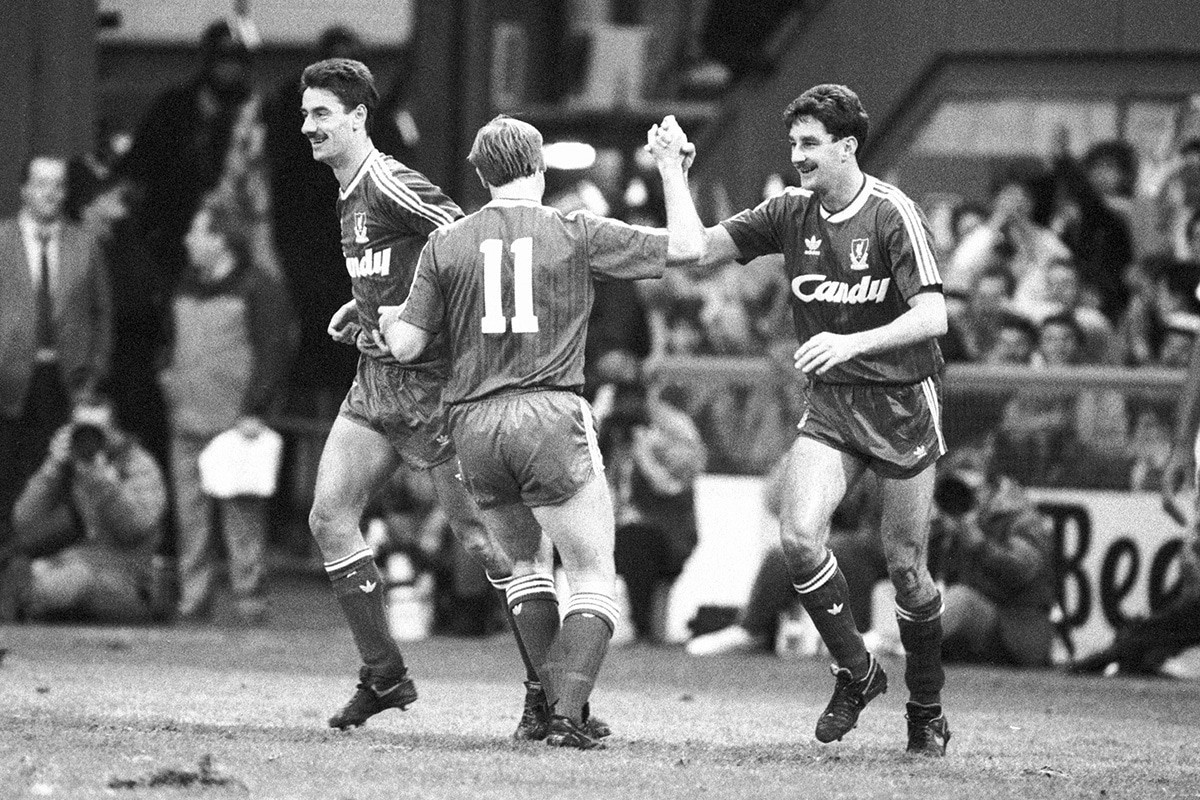 Perhaps the greatest display of Liverpool’s dominance was displayed when they faced Nottingham Forest at Anfield on April 13th. Not only did they get revenge for only their second defeat of the season a few weeks previously, but the game was also something of a microcosm of the season as a whole. Liverpool encapsulated their domination and class in 90 minutes of breathtakingly brilliant football.

Liverpool ran-out 5-0 winners and to be honest it could have been ten. They created chances at will as Barnes and Beardsley ran the Forest defence ragged. The Reds attacked relentlessly from the first whistle and the crowd were soon in on the act as it became apparent that something special was going to happen that night.

The wave of attacks came thick and fast and the Forest players looked like they were in a daze from the opening minutes. Even Tom Finney, one of the greatest players of all time, declared “I think that was one of the finest exhibitions of football I’ve seen the whole time I’ve played and watched the game. You couldn’t see it bettered anywhere, not even in Brazil,”

Victory over Tottenham Hotspur on April 23 confirmed what everyone had known from those early months back in the autumn, Liverpool were the best side in the land by a mile and rightly crowned champions. They had won the league by nine points and but for a determined effort from Manchester United in Alex Ferguson’s first season in charge, it could easily have been more.

The only disappointment for Dalglish and his men during the 1987/88 season was that they failed to go on and complete the First Division and FA Cup double for the second time in three seasons. Incredibly they were humbled by a plucky Wimbledon side in the final at Wembley in one of the tournament’s biggest upsets in its long history.

However, despite this obvious set-back, that Liverpool side will always be remembered for the sheer quality – the magic of Barnes and Beardsley, the potency of Aldridge, the nimbleness of Nicol, along with the contributions of Houghton and McMahon.

Of course, no one will ever know just how that team would have fared in Europe, but for those who turned up each week to see them play there is little doubt they could have been looked upon in the same light as Real Madrid’s great side of the early 1960s or Ajax’s European Cup Treble winners of the 1970s.

“From August of that year I’d been watching something I’d never seen before,” says football journalist Brian Reade, who spent much of that time watching Liverpool. “Something quite extra-ordinary, quite sublime, poetry in motion and the most beautiful football a Liverpool team had ever played. Beauty I’m still waiting to be surpassed.”

Liverpool fans who had grown up in the 1970s and early 1980s probably thought they had seen it all when it came to the achievements of their footballing heroes but the emergence of Barnes, Beardsley, Aldridge, McMahon, Houghton and the Class of ‘88 would certainly make them think again.