Manchester City asserted their superiority over Manchester United as the champions ran out 3-1 winners in the derby at the Etihad Stadium.

Goals from David Silva, Sergio Agüero and Ilkay Gündoğan sealed three points to take Pep Guardiola's side back to the Premier League's summit, two points ahead of Liverpool.

After Silva and Agüero established a commanding lead, United were offered a lifeline when Ederson tripped Romelu Lukaku, allowing Anthony Martial to continue his goalscoring form from the spot.

But City held on before constructing a masterful passing move, culminating in Gündoğan firing home to reclaim the derby day bragging rights after United's stunning comeback win at the Etihad in April.

No Pogba, no party

United were hit with an injury blow prior to kick-off with confirmation that Paul Pogba was not fit enough to make the squad.

The Frenchman, at times frustrating, is easily Mourinho's most accomplished midfielder in possession – and United certainly missed his vision and range of passing.

That is not to say that Pogba alone would have greatly influenced the pattern of the game. Even with the World Cup winner, City would have controlled possession and dictated the tempo.

However, on those occasions when United were able to get their foot on the ball, Pogba's absence was telling.

Considering his immense natural ability, Pogba can be enigmatic. However, as evidenced with two goals against City in April, he possesses a significant threat from midfield – and a mobility sorely lacking in a trio of Nemanja Matić, Ander Herrera and Marouane Fellaini.

Fernandinho as crucial as ever

Much has been made of Fernandinho's mastery of the dark arts and while the Brazilian certainly displayed his cynical edge with a couple of ‘tactical' fouls on United players, the 33-year-old was simply outstanding.

Flanked by the guile and craft of Silvas David and Bernardo, Fernandinho offered City balance, steel and tactical discipline in midfield.

Signed in 2013, he has been such a pivotal cog in the City machine under Manuel Pellegrini and Guardiola, a significant influence in the title wins of 2014 and 2018.

It's worth remembering that, before United swooped for him, City had targeted Fred, Fernandinho's successor in the Shakhtar Donetsk midfield, as a potential long-term replacement.

While United fans are still trying to work out what Fred offers that warranted a £50million outlay, City fans are flirting more with trepidation, trepidation that comes with knowing how difficult it will be to fill the Fernandinho-shaped hole in midfield in the future.

He may turn 34 in May but, for now, Fernandinho continues to play with tremendous energy. As joyous as it is to watch Silva with the ball at his feet or to awe at Raheem Sterling's blistering change of pace, Fernandinho remains as important as ever to Guardiola's masterpiece.

Mourinho has had success in the past when deploying Ander Herrera as a dedicated man-marker on an opposing side's most influential player, famously using the Spaniard to keep tabs on Chelsea's Eden Hazard.

From the outset it seemed as though the 29-year-old's job at the Etihad was to do likewise to David Silva.

Of course, that was always going to be easier said than done.

It took Silva a mere four minutes to lose his marker and cut United open, finding Sterling with an incisive through-ball in behind Chris Smalling. 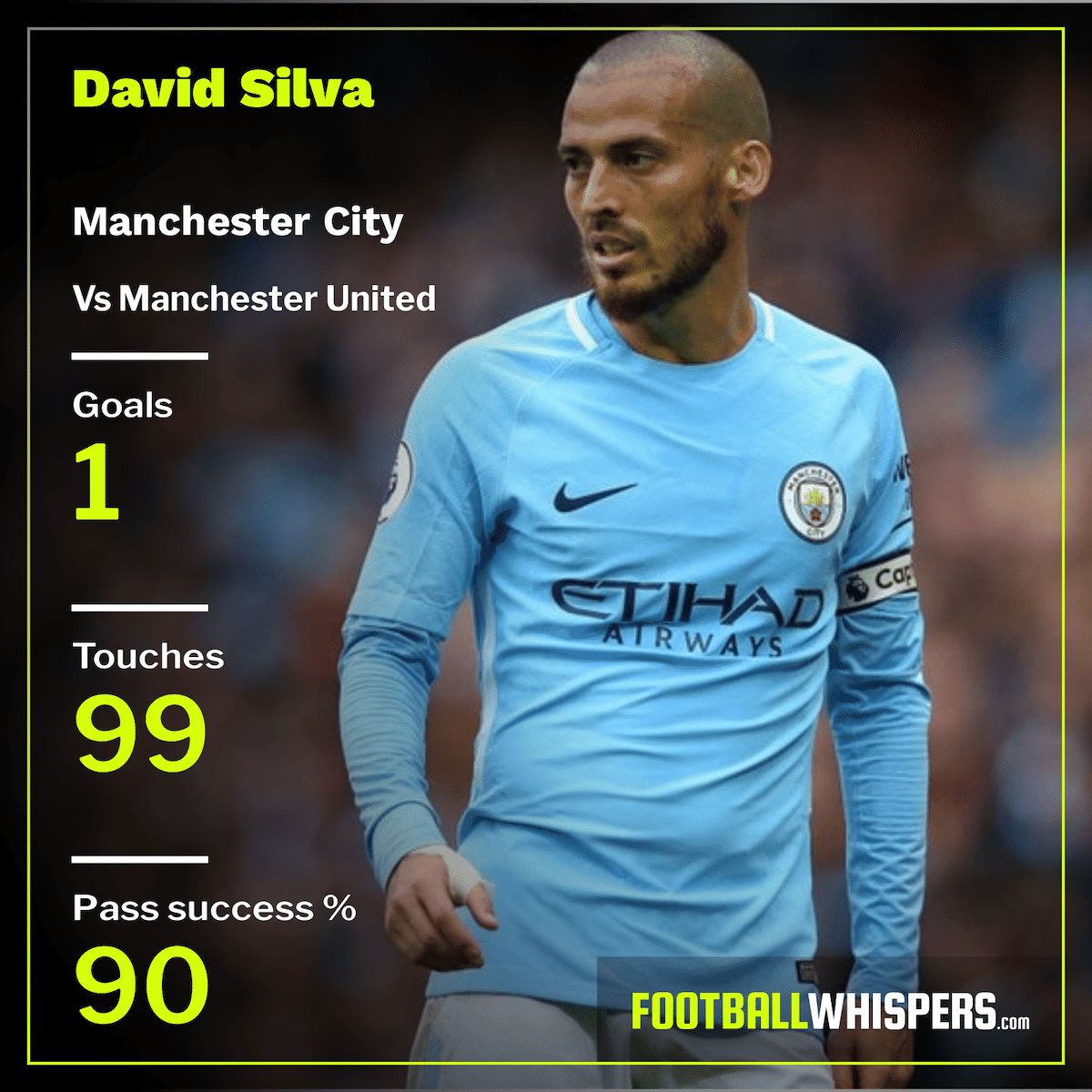 And that, unfortunately from a United perspective, set the tone. Silva was imperious, floating about with freedom and purpose, linking with Sterling, Agüero and his namesake Bernardo at will.

The 32-year-old grabbed the opener after 12 minutes, once again finding space to kill Bernardo's cut-back with his first touch and fire past David de Gea with his second.

It's difficult to hold it against Herrera. Trying to track Silva when he's in the mood is a hopeless task.

Ederson shows his best and worst

One of the most obvious orders of business last summer for Guardiola was buying a goalkeeper. The Claudio Bravo experiment had failed and Willy Caballero left for Chelsea.

But it was important for Guardiola to buy not just a good goalkeeper, but the right one. In Ederson, the club found the perfect man. Although the 25-year-old cost £40million from Benfica, the Brazilian has shown it to be money well-spent over the last 15 months.

Against United, his distribution was, once again, on-point, particularly when he found Leroy Sané with a pitch-length heat-seeker. Wonderfully adept with the ball at his feet, Ederson offers much more than crisp, 10-yard passes to his defenders.

With City 2-0 and coasting, Ederson's rush of the blood to the head offered United hope and made the final 30 minutes more uncomfortable than Guardiola would have liked.

Lingard still not right after injury

Jesse Lingard's World Cup adventures with England came at a cost. He arrived for United's pre-season carrying an injury, which has limited him to five Premier League starts so far this season.

The 25-year-old is clearly still trying to recapture his confidence after that setback. He was wholly ineffective in the 3-0 defeat to Tottenham Hotspur in August and failed to make much of an impact in starts against Watford and Wolves, too.

He was the first man to be replaced against Juventus midweek and it was the same story here; his afternoon brought to an end after an anonymous 57 minutes, replaced by Lukaku (who subsequently won a penalty with his first involvement).

At his best, Lingard is a breath of fresh air in the United attack but managed just 28 touches and 18 passes against City. At 25, he still has plenty of time to rekindle his United career, but there can be no denying that he seems a little lost at the moment.