Manchester City begin another Champions League campaign, looking to improve on last season’s effort when they were knocked out by Monaco in the round of 16.

In the previous season, under the management of Manuel Pellegrini, they had reached the semi-finals of the competition for the first time in their history, and were only knocked out by a fairly lucky solitary goal scored when Gareth Bale’s cross deflected off Fernando and into the net.

Pep Guardiola will be looking to put his own stamp on the club’s European Cup history and having spent over £200million on transfers this summer he should now have the tools to do so.

Though the Eredivisie isn’t as strong as the Premier League, last season’s champions come into the game in high spirits and full of confidence. Meanwhile, Guardiola’s side approach the fixture on the back of a win against Liverpool which was easier than it should have been, after their opposition went down to ten men early in the game.

Prior to that unique game, City had struggled to create a fully functioning unit and hadn’t convinced in their three previous Premier League games, but Feyenoord may give them another chance to come together, just as Sadio Mané did by reducing their opposition to ten men on Saturday.

Feyenoord play a similar 4-3-3 formation to the one regularly used by Liverpool and often used by City. The difference being that the second midfielder, Tonny Vilhena, is more likely to sit with the deepest player, Karim El Ahmadi, than he is to bomb on and join the more attacking of the three, Jens Toornstra.

Vilhena plays the deeper role, which is similar to the one City’s Kevin De Bruyne plays when he drifts back to support Fernandinho during the build up. But the Dutch side end up with a version of 4-3-3 which is close to a 4-2-3-1 thanks to the No 10's tendency to support the defence more than the attack.

This is perhaps for the best, as Giovanni van Bronckhorst’s side also like to play with a high defensive line, and this is where they could play into City’s hands if Vilhena abandons his position of support for El Ahmadi (No 8). 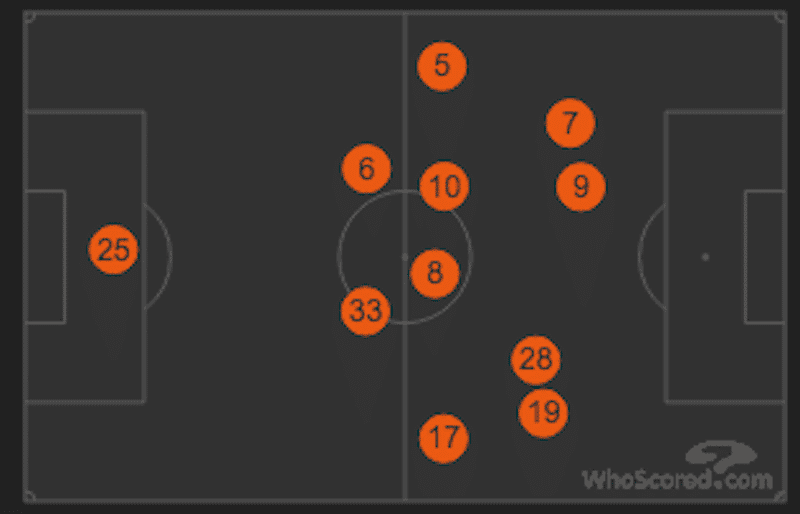 The above image shows the high line from their 5-0 win at home to Willem II. If they play like this in Europe then they could pose a threat to the City back line, but it's likely that they'll eventually be dominated by their opposition's willingness to try to do the same, but with better players.

The pace of Leroy Sané, who's likely to start this Champions League fixture, could pose a threat to such a system, and the winger showed against Liverpool how dangerous he can be if given space.

There’s no doubt that, the Super Cup aside, City are Feyenoord’s first big test of the season. They also face PSV Eindhoven the weekend after, so their fairly leisurely start to the campaign is about to come to an abrupt end.

As is always the case with teams who are supposed to dominate most teams in their domestic league, but can perhaps struggle on the European stage, they can change their tactics for one off games in Europe.

But Van Bronckhorst doesn’t seem like the type of manager who will abandon his core principles, even though there may be a slight tweak to the system as they look to stifle City’s array of attacking stars.

They may try to do this by keeping possession at the back, as their opposition also like to do, but a danger will arise if Guardiola’s side spring a high press.

The Feyenoord players who’ve seen the most of the ball so far this season are Brazilian centre-back Kevin Diks, with 69; and defensive midfielder El Ahmadi with 62 passes per game.

This shows they will build play from the back and will often favour the right side. 45% of their attacks have come down this flank, and sees right winger Steven Berghuis lead their goal scoring charts with four in four games.

On the other wing, Jean-Paul Boëtius can benefit from any switches of play, and has found himself in ample space to create things in attack, resulting in 2.5 key passes per game on average. He, along with right sided attacking midfielder Toornstra, who averages 2.8 key passes per game, are the creative hub of the side while Boëtius also stretches the play.

Two of the four goals Feyenoord have conceded this season have come from the penalty spot. Guardiola said in his press conference after the Liverpool victory that football is all about what happens in the boxes.

“Football is boxes. Every manager has ideas the way they play, but the boxes make the difference,” he said.

During the key moments in a game City have the players to be clinical when it counts, as Sergio Agüero showed with his goal against Liverpool, even prior to the sending off.

If Guardiola's side can encourage Feyenoord to play with a high line, then win the ball back before breaking beyond it, then there could be plenty of action, in one box at least. The retreating defenders will be desperate, and you wouldn't bet against another penalty being conceded by them in this game.

The Spaniard could be tempted to rotate his side, giving some of the players who haven't featured much this season a chance to shine while also resting some players ahead of a busy schedule. Though Ederson will want to play, he's likely to be left out after his collision with Mané, and Vincent Kompany is still suffering with a calf injury.

A slightly rotated City lineup, taking into account the injuries, would still be strong and could look something like this. 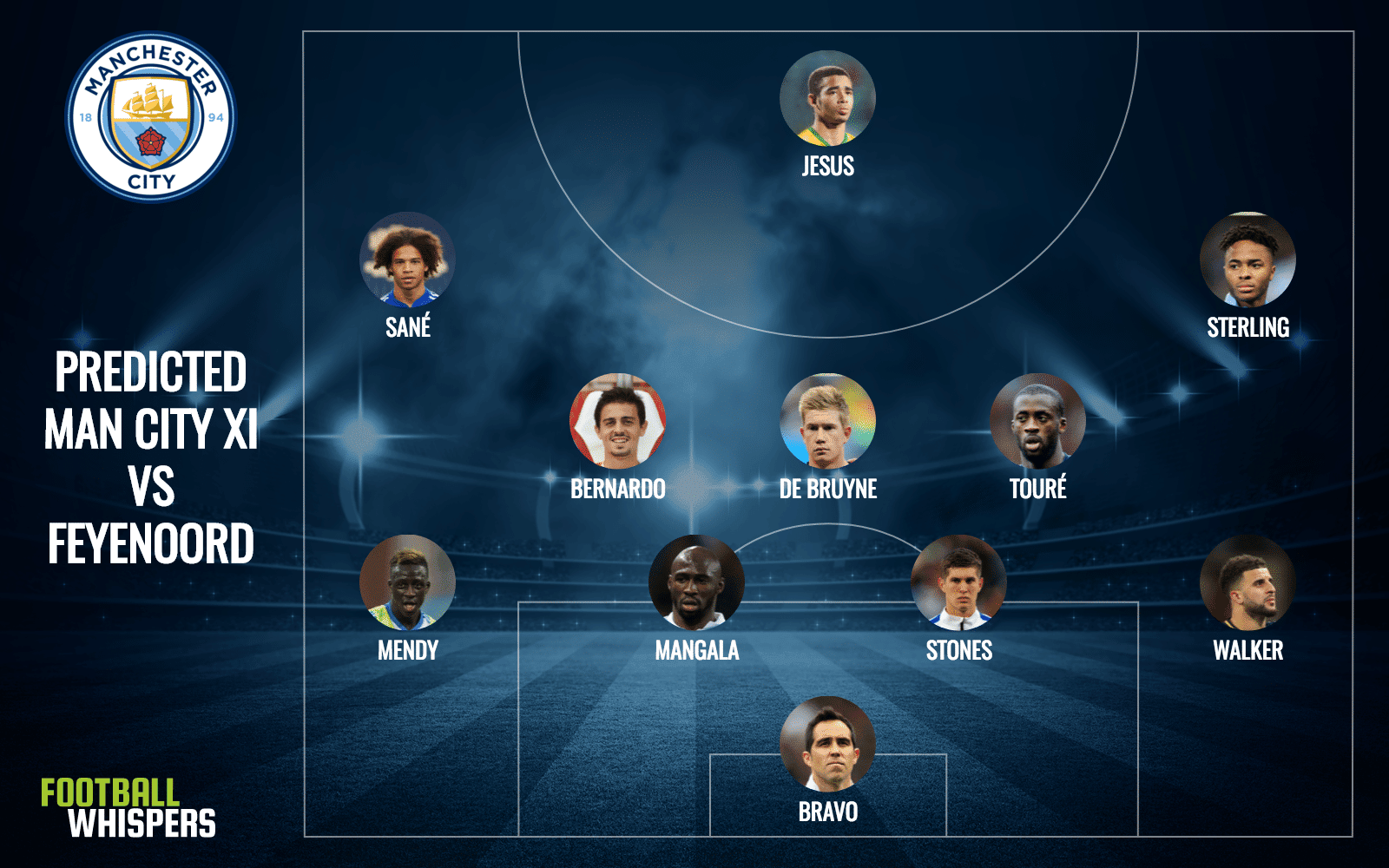 Use our predicted lineups feature at the top of the page to pick and share the side you would pick if you were Guardiola on Wednesday.

Our unique algorithm has predicted the starting XI it believes is most likely to start, but you can also give it a go yourself.

Just click ‘create your own’ and pick the players you would choose, and you can also see their stats per 90 minutes once you’ve picked them.

When you’re happy with your team, press confirm and you’ll be able to share it wth your friends via social media.