Celtic headed into the summer transfer window with a void to fill. A top centre-back was needed following Dedryck Boyata’s departure to Hertha Berlin and Filip Benković’s loan spell coming to an end.

The centre-back market is currently in a flux of transition. Defenders went from being undervalued to overvalued in the blink of an eye with prices almost doubling. It meant, in theory at least, the Bhoys would have a difficult job finding a player of the requisite quality within their price range.

But in Christopher Jullien Celtic appear to have done just that; the 26-year-old has moved to Parkhead in a deal reportedly worth a little over £6million.

It’s a move away from what the Scottish Premiership champions tend to do in the market, with the Hoops usually going for younger players with potential resale value down the line.

Jullien is a readymade first-team star who can make an immediate impact. And there’s still potential for the Bhoys to make a huge profit on him down the line.

But just how good is the centre-back? Here, we take a look at what Celtic fans can expect from the France under-20 international.

At Toulouse Jullien formed a dominant partnership alongside Issa Diop but it was the younger of the two who really caught the eye, more so because of his age. Diop could do everything Jullien could but he was younger, so more clubs showed an interest.

While that could be viewed as a negative, it's also the reason Celtic appear to have snared him for £14million less than West Ham paid to sign Diop. The Bhoys, as highlighted in the graphic below, are still getting an aerially dominant centre-back who is composed in possession. They're worth their weight in gold. 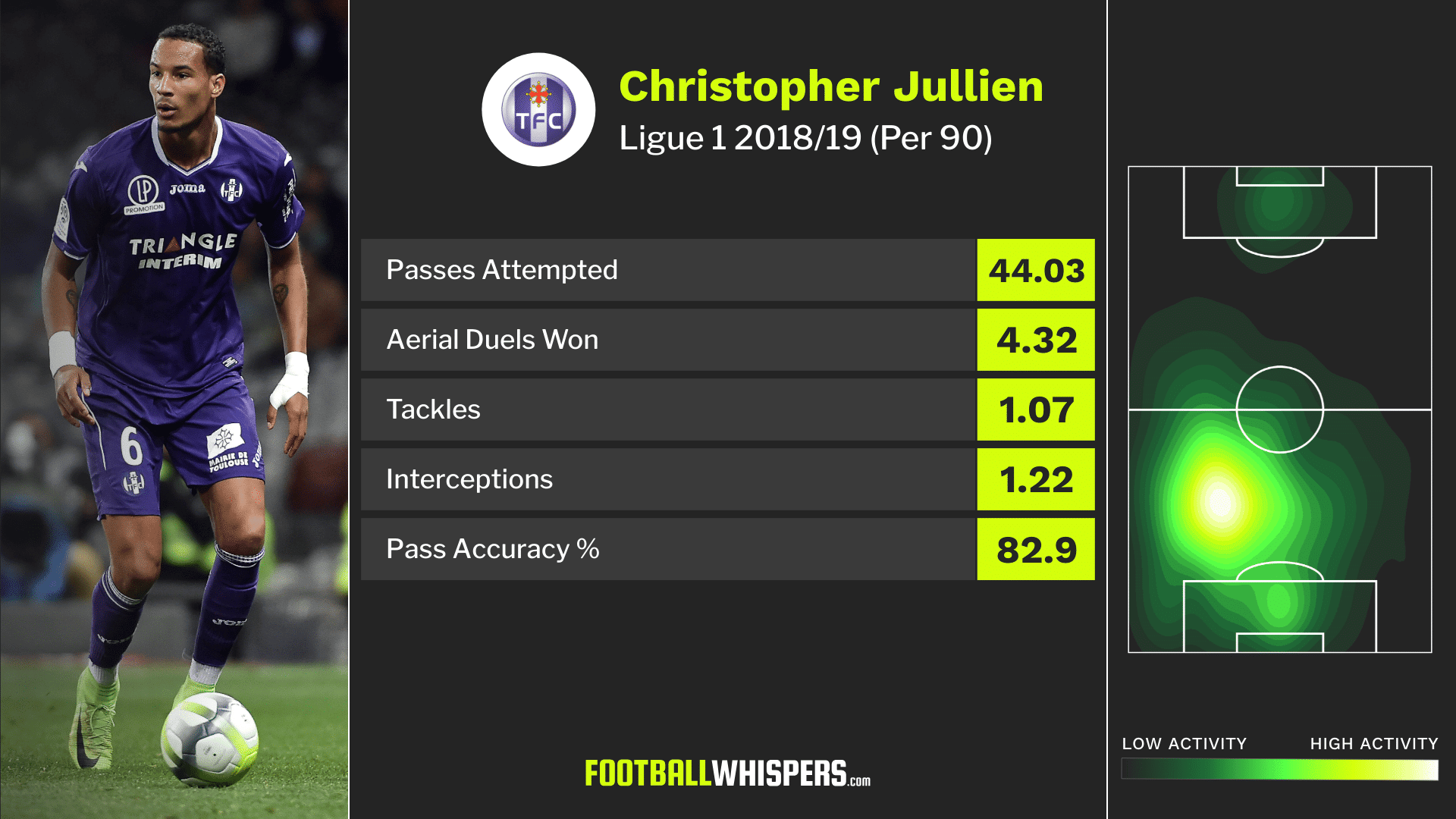 He ranked in the top three in France for aerial duels won by defenders last season and only five players made more headed clearances on a per 90 basis. He's the aggressor in the air that every team needs.

He also attempted 44 passes per 90 and completed just shy of 83 per cent of them. His completion rate is more impressive when considered he played 44 per cent of his passes forward.

Jullien hit incisive, progressive balls into those ahead of him with great regularity and unnerving accuracy. He also completed over half of his long passes and this is one of the 26-year-old's selling points.

He can almost act as a quarterback in the defensive third, pinging passes diagonally into the channels. He's a natural at it and if he picks the right moment he can turn defence into attack in an instant.

Picked out some good and bad points in this video. He’ll flourish in the SPFL, might get caught out on the break in the Champions League. pic.twitter.com/AfZ2XztuoK

Last season, Jullien won possession back over two times in the middle third per 90. It highlights his willingness to step higher up the pitch and shows he's comfortable playing in a high line. He's proactive and, just as he is in the air, aggressive and confident.

However, at times this can lead to reckless moments. He can dive in and expose the team defensively. He's prone to going to ground, too. A trait you don't want in the modern game and at 26 it's perhaps too late in his career for him to change that. It's no longer a style, it's a habit.

Having said that, though, with Celtic being so dominant in the league it's unlikely he's going to be exposed to those situations on many occasions.

Once Jullien settles in at Parkhead he'll be a force of nature and a clear leader for the Bhoys. An imposing centre-back with the chance to shine, he's not going to waste such an opportunity.

It's the perfect storm for player and club, and he could turn out to be a shrewd signing.