The United States men’s soccer team suffered humiliation when they failed to qualify for the 2018 World Cup. There was an autopsy into what went wrong and who was to blame.

Bruce Arena resigned from his role as head coach and Gregg Berhalter was eventually named as his successor. His mandate was to usher in a new era with potentially the most talented pool of male players the country has ever possessed.

Despite their relative inexperience, many have already made an impression at top European clubs. Weston McKennie has impressed at Schlake; Tyler Adams has featured for RB Leipzig; Timothy Weah joined Lille in the summer to help fill the void left by Nicolas Pépé; Manchester City acted quickly to tie goalkeeper Zach Steffen to a deal.

But the poster boy for this new generation remains Christian Pulisic.

The 21-year-old has over 30 international caps to his name and has the ability to become the first global American soccer superstar. But, unfortunately for the U.S, he’s often sat on Chelsea’s bench, starved of minutes in the Premier League.

His £60million switch to Chelsea got the January transfer off to a flyer. Tipped to be the long-term Eden Hazard replacement, the Blues got their business done early.

Maurizio Sarri, then in charge of the Premier League side, revealed he knew little about the deal at the time.

On paper, it didn’t appear the best of fits. Sarri was reluctant to give highly-rated winger Callum Hudson-Odoi a chance in the first-team so his dismissal and the eventual appointment of Frank Lampard was supposed to help Pulisic’s chances of making a name for himself in the Premier League.

Yet heading into the second week of October, the 21-year-old’s last start for the Blues in the English top-flight arrived on the final day of August. And he was omitted from the Champions League squad for the match against Lille altogether, much to the dismay of fans of both Chelsea and the USMNT.

Lampard was quick to explain his decision: “This is one of the difficult problems in this job. I have good players and everyone has a story.

“Ruben Loftus-Cheek will come back and be an international player. I can't pick them all. All I have to demand of them is that they show me in training they are worthy of the place.

“It's just my job. Next week you might be asking me about two other names. It's the competition that we have.” 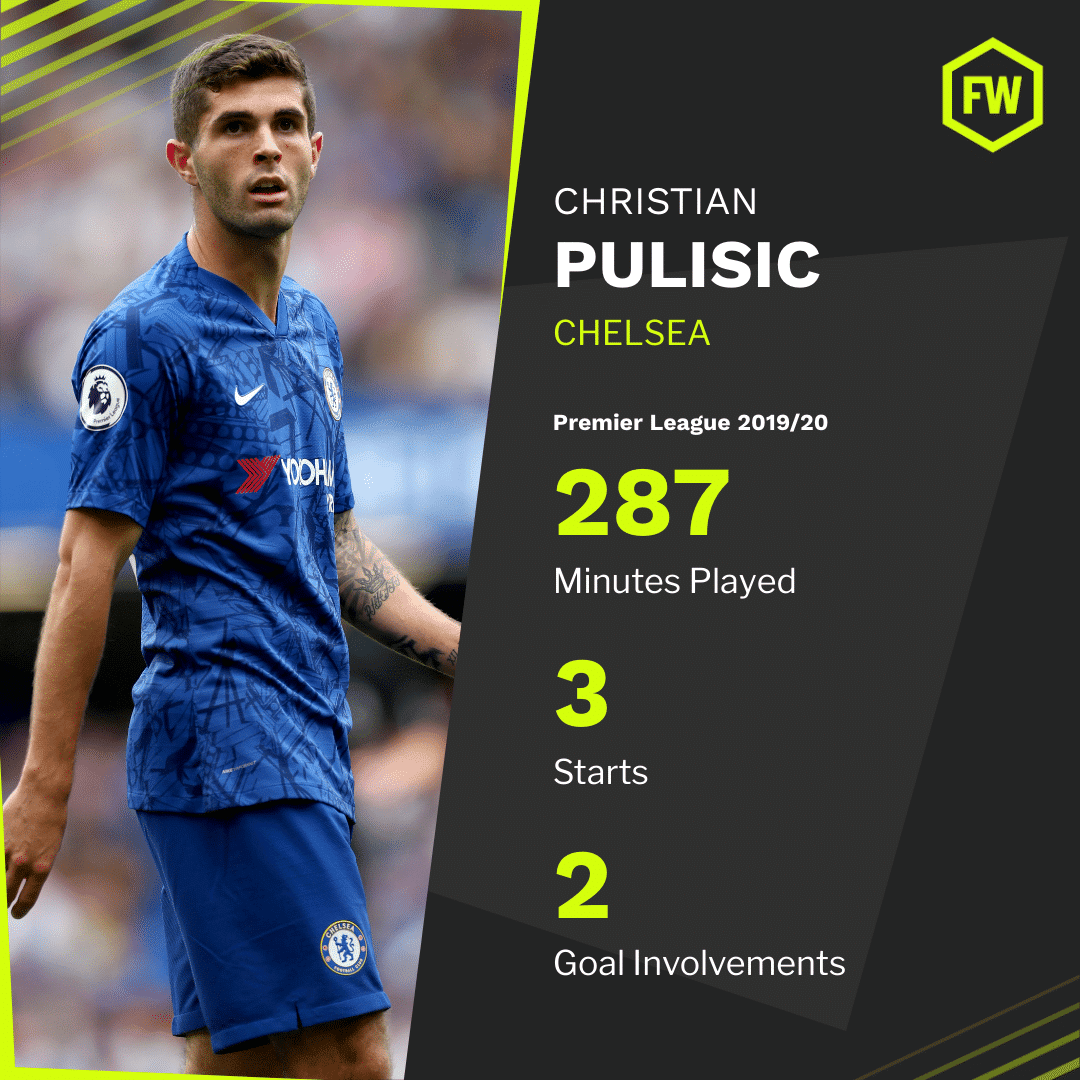 Given their registration ban, it's easy to forget just how stacked the Chelsea squad is.

Hudson-Odoi, Mount, Pulisic, Willian and Pedro are battling it out for two positions – there will be occasions players with years of experience will miss out. So it isn't a slight on Pulisic, it just highlights how competitive a place in the final third is at Stamford Bridge.

Furthermore, while many cite the 21-year-old's price tag to highlight his ability, what Chelsea paid for the former Borussia Dortmund starlet doesn't speed up his acclimatisation period.

Pulisic is playing for a new side – one that is in transition under a new coach – and in a different league. Lampard's decision to manage his time and exposure is a wise one. For example, how long would it be before people are calling him a flop if he's thrown in at the deep end and doesn't immediately perform?

First impressions count for a lot in football. If a player fails to shine soon after a big-money move, it's harder to shake a ‘fraud' tag than it is to make a name for themselves after being allowed to bed in for a couple of months.

Jürgen Klopp is famed for this. He will protect new signings, keeping them out of the limelight and out of his starting XI until he feels they can deliver what he wants. It means they aren't under scrutiny from the press and extra pressure isn't heaped upon them.

It can be frustrating but, ultimately, it leads to great success. They develop and make mistakes away from the public eye and this improves their chances of making an impact when called upon.

Something else to consider is Pulisic's final season in Germany, as Chris Williams, Bundesliga writer for Forbes, told Football Whispers.

“Any American fans of the USMNT may not like to hear this but Pulisic plateaued at Borussia Dortmund, especially after Thomas Tuchel left. He had a poor season which coincided with Dortmund plummeting under Peter Bosz and then Peter Stöger.

“In his final months with Dortmund, Pulisic was overlooked in the main. Although hampered by a few injuries, he was way down the pecking order of Jadon Sancho and Jacob Bruun Larsen. There was a feeling within the club that the end of the road had been reached – he needed a change, and the club needed new options. The sale to Chelsea powered a number of new signings.”

Unfortunately for Pulisic, he arrived at a club in the midst of a change. He was signed for a Sarri side and while Lampard's tactics aren't radically different, they have, nonetheless, unique demands.

Pulisic did need a change of scenery but having missed the best part of the 2018/19 campaign – he appeared in fewer than 1,000 Bundesliga minutes – the American needed much more than just a new club. He needed time and patience. Lampard is giving him that. Fans should do the same.

At 21 he's still got well over a decade's worth of football to give to both club and country. There's no need to rush him now and potentially risk his development.

The Chelsea boss is handling the situation in a fashion you'd expect from a more experienced coach. Not only could this be the making of Pulisic, but it could also play a pivotal role in Lampard's development, too.